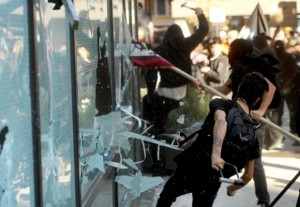 It’s been about seven months since Chris Hedges dropped his bombshell attack on Black Bloc tactics as the “cancer in Occupy” and his words still echo in activist circles across the country. Charging protestors who “dress in black” or “obscure their faces” with hypermasculine—even criminal—behavior, Hedges drove a wedge between radicals within Occupy apparently committed to very different visions of resistance. Debates within the movement have obsessively focused on the virtues of violence or otherwise at the hands of protestors and the state security apparatus. The small but persistent anarchist core that helped launch the protests in 2011, predictably scandalized by Hedges’ unhinged accusations, flatly refused to engage with him publicly. Hedges similarly expressed no interest in opening up a dialogue with people he viewed as little more than thugs and hooligans. Fortunately for us, this mutual skepticism was overcome last Wednesday in a highly anticipated, but ultimately anti-climactic, debate between Hedges and the ideologically anarchist CrimethInc. Ex-Workers Collective.

I entered into the debate expecting to sympathize with CrimethInc. and left frustrated by the shallowness of the discussion. (In the spirit of full disclosure, I wrote an op-ed critical of Hedges in this newspaper following his inflammatory article earlier this year.) I had sincerely hoped to hear a compelling case for the ubiquitous “diversity of tactics” hailed by so many on the libertarian Left. Unfortunately, Brian Traven, the CrimethInc. representative charged with debating Chris Hedges, struck me as woefully unprepared for the task. This was unfortunate, not only because the audience was denied a truly incisive look at the important issues, but also because Proshansky Auditorium was literally overflowing with black-clad, body-modified anarcho-punks expecting to see Hedges put in his place. In my view at least, this did not happen. To put it simply, Traven lost at what should have been a homecoming game.

Once the speakers were introduced by Sarah Leonard of Dissent magazine, Brian Traven began. He modestly (but repeatedly) informed us that although he wasn’t accustomed to speaking before larges audiences, he would “speak from the heart.” All very nice, but hardly an effective opening statement. Hedges, with irrepressible pomposity, dove right in, immediately laying out his opposition to Black Bloc tactics simply and without flourish. In sharp contradistinction with Traven, this was a man accustomed to speaking before large audiences.

Hedges mostly summarized the points in his original article: Black Bloc is a dangerous tactic, a gift to the surveillance state that allows the movement to be easily repressed, while undermining its mainstream appeal. His position has apparently remained unchanged despite the deluge of compelling responses to his arguments that have appeared during the last seven months. Members of the audience expressed their dissatisfaction with Hedges by repeatedly laughing incredulously at his points. Occasional expletive-addled heckles interrupted him at several points, especially when he accused those who engage in Black Bloc tactics of “using” Occupy to their own ends. Not everyone in the audience resented Hedges’ however. A corpulent bearded man sitting next to me indicated his approval by gesticulating in the “twinkle fingers” style popularized at Occupy gatherings last autumn.

The debate jumped wildly across topics: mask-wearing, police violence, state power, the meaning of civil disobedience, horizontalism, criminality. At one point Traven declared, “Chris Hedges is calling some of you here in this room criminals [for engaging in Black Bloc tactics].” To this Hedges abruptly replied, “When I say ‘criminal’ I’m referring to Wall Street.” Aggressive behavior by masked hooligans, he argued, is not necessarily morally wrong, but it is a tactical blunder that will not advance Occupy’s goals in the long-term. Traven insisted that American social movements have always been tied to a history of violence against private property. Giving a recent example, Traven pointed to the (lack of) a response by the city of Oakland when Oscar Grant was shot and killed by police. Only when riots erupted did the city finally react. Therefore, violence is occasionally required to advance the cause. “Look, I am not a pacifist,” Hedges told us. “I was in Sarajevo. I know that violent resistance is sometimes necessary. But we’re not there yet in this country … If the concern was simply over masks, I would cede many of your points. But mask-wearing leads to other things that scare away the mainstream and undermine the movement.” Challenging state power through violence, Hedges insisted, requires at least matching the states repressive capacity. Barring that, violence is futile.

At times Traven diminished my intuitive sympathy for his views by making snide ad hominem remarks about Hedges. In one case (I’m not entirely sure I understood the reference, but it drew arrogant laughter from Hedges’ detractors in the audience) Traven said, “Chris sees ethnic cleansing everywhere, even when it’s just a kid with a spray paint can.” To make matters worse, these kinds of remarks were almost never followed up with substantive responses to Hedges’ actual points. When Hedges began speaking about the supposed “hypermasculinity” of violence, Traven dismissed the argument altogether. Instead, he said there was “some problematic gendering going on” and that it wasn’t constructive for “two white men” to go at it on such issues. I was left confused as to why Traven would agree to participate in such a debate to begin with if he felt certain issues were altogether inappropriate for a discussion between privileged white men. He opted to read a letter from a jailed female colleague instead of attempting to rebut the points.

In another instance of unnecessary personal attack, Traven called Hedges “blind” to the danger his writings caused, that the state now uses his work to justify repressing those engaged in Black Bloc tactics. “I can assure you the state doesn’t give a damn what I write about,” Hedges replied. “I wish they did. I wish they read everything I wrote. But they don’t. And they certainly don’t lock up protestors based on what I write. I’m not going to go into the David Graeber argument about whether what I write causes some people to be hurt.” The state, he argued, eagerly seeks ways to stymie popular uprisings and Black Bloc gives them the whiff of criminality required to repress the entire movement. “The reason I sued Obama over the NDAA [National Defense Authorization Act] was because I knew they’d go after the Black Bloc first.” Incredulous laughter.

In their closing statements it was clear that the speakers had not budged at all. Hedges warned against a latent proto-fascism led by elements on the far-Right like the billionaire Koch Brothers, while Traven ended with the depressingly trite observation: “Not all violence… is bad.” They broke no new ground, illuminated no obscure understanding of resistance, barely addressed the points invoked by their respective opponents, and succeeded only in making me question, yet again: Why? Why in the U.S., where activism takes on an especially timid approach to state power, where protestors scrupulously adhere to police directives, are we concerned when a few people with masks scream at the police? In my view, Hedges has built a straw man based on a superficial understanding of the very tactic he resents. But Traven missed the boat altogether in his appeals to virtuous violence. Why are we even talking about this? There have been no major acts of violence. By all standards, Occupy has been one of the most well-behaved mass demonstrations in recent memory, in which the only incidents of private property damage have been committed by the NYPD in the course of brutalizing protestors. So why are we even discussing this? I would love to have the conversation at some point, when events on the ground display an urgency that cannot be avoided. But, (as Hedges repeatedly said vis-à-vis state violence) we’re simply not there yet.

Past Articles
5 comments to “The Narcissism of Small Differences: Hedges v. CrimethInc.”