On August 4 2016, CUNY’s union, the Professional Staff Congress (PSC) announced that the new contract, negotiated by union leadership through arbitration with a very resistant administration, was ratified by the union membership with a ninety-four per cent “yes” vote. Despite the seemingly overwhelming mandate for the ratification, the negotiation was not without its detractors from within the ranks of the union membership. Specifically, the Adjunct Project (cunyadjunctproject.org), a resource and service organization for adjuncts and teaching fellows at the CUNY Graduate Center, published the article “7 Reasons We Advocate a ‘No’ Vote on the Tentative Contract” that outlined a seven point refusal of the contract and highlighted particular ways in which this new contract reifies inequality in CUNY employment practices. Using adjunct labor to prop up a system that values senior level administrators (let’s call them executives), full-time tenured and tenure-track faculty, and full-time staff (including mid and lower level administrators), in that order, the new contract leaves the majority of teaching staff – adjuncts – competing for a few crumbs of potential job security and sharing fractions of the pay increases soon to be enjoyed by full-time faculty and staff. My goal in this article is not to rail against the new contract but, having voted “no” to a document that further institutionalizes my own disposability, I can’t help but wonder what spurred so many of my adjunct and graduate fellow colleagues to vote “yes” to a contract that so thoroughly dismisses our interests – the interests of the vast majority of teaching staff.

A common view shared by many within our college community is that the contract is “better than nothing.” Maybe so! Maybe those of us on adjunct “salaries” and graduate fellowships are simply so strapped for cash that we’ve become desperate for any crumbs (e.g. half the $1000 bonus being offered to full-time faculty and staff—if you qualify) that the university and our union deigns to toss in our general direction. Maybe we’re all still hoping that our lives as adjuncts – scraping by, depending on financial support from our partners and families, using public assistance when needed, commuting across the city to multiple campuses – are only temporary, and that one day soon we’ll be noticed for our expertise as educators and our brilliance as scholars, shepherded out of the contingent faculty hamster wheel, and folded into the tenure-track professoriate. My friends and colleagues: don’t hold your breath.

I teach and research in the arts and humanities, but I believe that a bit of basic math is in order. Right now, and continuing under the new contract when it is finally implemented, rules that are intended to, as the Adjunct Project puts it, “limit our exploitation” are hamstringing our collective capacity to earn a living wage. Under the 9/6 rule, CUNY adjuncts cannot teach more than nine credit hours per semester on one campus, and can then teach a maximum of only six credit hours at other campuses. That is a total of three three-credit courses on your primary campus and two three-credit courses on across the other campuses, or a total of five three-credit courses. I am currently paid as an “Adjunct Assistant Professor” and not as an “Adjunct Lecturer” because I have an MFA, a terminal degree. This means that, unlike so many of my peers who have MA degrees, but like so many of my colleagues who have completed their PhDs and are still adjuncting, my hourly rate is $73.53 (as compared to $64.84). That still turns out to be only slightly over $3000 (before taxes) per course per semester. At $3000 per course, a CUNY adjunct teaching five classes per semester will earn $15,000 per semester. If that adjunct is able to maintain that very full schedule across two or more campuses each semester, they will earn $30,000 for the year. Living in New York City, paying half the rent in an apartment that costs $2,400 per month, this hypothetical adjunct will spend $14,400 per year on rent alone, leaving them $15,600 for all their other expenses: transportation to and from those classes, the technology needed to teach them and maintain their research, food, travel to and from the conferences that might help them land a full-time job etc. In other words, an adjunct teaching the maximum number of courses at CUNY will spend approximately half their pay on rent alone to live in New York City’s outer boroughs.

For comparison, a 3-4 or 4-4 teaching load is considered “heavy” for full-time faculty. Full-time tenured and tenure-track faculty at NYU have a standard teaching load of 2-2. The lowest pay rate for full-time assistant professors at CUNY, based on the PSC documents, is currently $42,873 annually. While this remains below a standard living wage of $50,000 for New York City residents, it is nonetheless significantly more than adjuncts are able to earn teaching 5-5 loads on multiple campuses. Within my own field of theatre studies, there is an annual research grant for faculty with high teaching loads awarded by the American Society for Theatre Research (ASTR). While this can ostensibly be awarded to a contingent faculty member, one example of the kinds of research support it can be used for is “course release” (http://www.athe.org/news/305136/ASTRATHE-Adjunct-Survey-Data.htm). Adjunct instructors are not eligible for course release. ASTR recently conducted a somewhat informal survey of adjunct labor in our field, in collaboration with the Association for Theatre in Higher Education (ATHE) (http://www.athe.org/news/305136/ASTRATHE-Adjunct-Survey-Data.htm). Based on the results of that survey, one of the suggestions offered to ATHE for the support of adjunct laborers at our annual conferences was a series of awards for teaching and research specifically targeting adjunct faculty. This kind of recognition in our broader field might help mitigate the perception of inadequacy that keeps full-time adjuncts (an oxymoron) in the bottom tier of faculty while young scholars who are able to and interested in landing post-doc positions and visiting lectureships are often more able to convert those precarious positions and their peripatetic lifestyles into full-time work. The fact, nonetheless, remains: adjuncts are not only being paid less than full-time faculty, we are being paid less for more work.

This brings me to the crux of my complaint. When students are paying record high tuitions at a university that used to be free for New York City residents, when the majority of classes are taught by contingent faculty earning poverty wages, when budget cuts out of Albany lead to cuts in library services first and foremost, the mission of the university is no longer being served. I teach at Baruch College, where the average class size is fifty students. At $275 per credit hour, it takes only four students to more than pay my $3000 per course salary. Yet classes won’t even run with fewer than ten students, and most require at least twenty. Just over a year ago, at the beginning of the Fall 2015 semester, all faculty in the Weissman School of Arts and Sciences received an email from the Associate Provost and Assistant Vice President for Teaching and Learning, Dennis Slavin, informing us that due to budget constraints, the library’s funding was being cut. The Newman Library at Baruch, we were told, was no longer able to buy books to keep on reserve. Slavin suggested several options for those of us wishing to provide books on reserve for our students, nearly all of whom work and some of whom are on public assistance: 1) we could use old versions of the books if the library already had those available, 2) we could loan the library our personal copies, 3) we could buy a copy of the book and donate it to the library (on our adjunct “salaries”), or 4) we could scan sections of the book and upload them to Blackboard. What he failed to mention regarding the use of Blackboard, however, was that the college had recently implemented a 750 MB cap on the amount of content we are permitted to upload. In a separate email regarding this cap Slavin noted that, based on the amount of space being used by all faculty at Baruch, this seemed to be a reasonable number. All faculty, however, do not use Blackboard. “Average” faculty usage therefore includes faculty who use no space at all! Faculty needing more space than the 750 MB can petition for increased limits. Each semester. This petition requires filing a written justification and enables the kind of direct oversight of our teaching practices that might lead to censorship or non-renewal of adjunct contracts. Notably, neither in the effort to reduce spending on Blackboard storage nor in the budget cuts to the library did Slavin or his colleagues in upper level administrative and executive positions suggest cutting their own six-figure salaries to meet the educational needs of our students. Notably, Chancellor Milliken has continued to accept a $20,000 per month apartment while failing to implement the contractual increases and back pay in a timely manner. Notably, not accepting a $20,000 per month apartment as part of his compensation seems not to have occurred to our chancellor. Here at the Graduate Center, President Chase Robinson informs us that, in order to meet budgetary restrictions, when senior level administrators (he does not mean executives) retire, their positions are not being renewed. This means that mid-level administrators are being required to take on those tasks without pay increases or promotions. Yet when graduate students ask President Robinson what the college can do to better support a variety of student concerns – diversity, the needs of international students, pedagogical training, students with disabilities, etc. – his response is consistently that “we should hire someone for that.” This cycle is untenable.

I attended a PSC union meeting for the first time last year. My goal was to draw attention to the problem of our union’s slogan. “CUNY Needs a Raise” is a true statement. Yet it grossly miscommunicates the issue to city residents and especially to students and families paying those record high tuitions. This slogan makes those of us at CUNY who do desperately need a raise look like money-grubbing white collar workers, out of touch with the challenges our students face. Rather, I would suggest that our slogan as we work for an actually equitable contract in 2017 should be “Where is the Money Going?” I suggest this slogan because there is one place the money is obviously not going, and that is to teaching and learning. If we at the CUNY Graduate Center are producing and becoming the next generation of faculty, if we are invested in colleges and universities as institutions of higher education, my question for us is: what are we going to do about it? 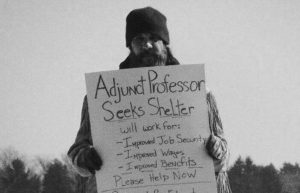