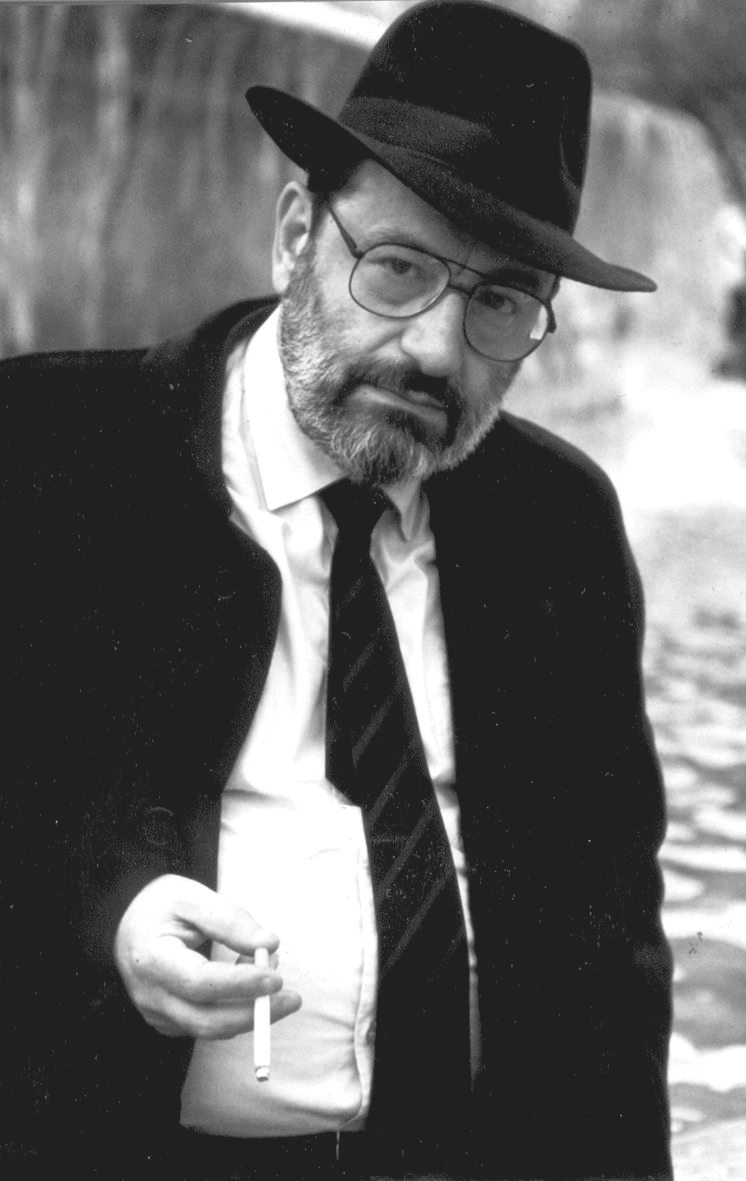 Umberto Eco begins his final book, Chronicles of a Liquid Society, by imagining a world in which being conspicuous is the ultimate value, a world so bereft of stable structures of meaning that the problem of recognition — so long a staple of arcane political theory — becomes so overwhelming that it defines daily life. It is this world he identifies, following Zygmunt Bauman, as “a liquid society,” in which there’s only ever an evanescent present; the past is fiction, and the future is already lost.

Chronicles was published posthumously last year, and it is a collection of his columns for an Italian magazine. There are some beautiful and hilarious essays, including one that meditates on the “metaphysical solace” that detective novels provide us and which might remind his fans of his own (almost perfect) murder mystery, The Name of the Rose. And yet, as the nature of the enterprise might suggest, this is often a cranky book and sometimes a lazy one, and it is frequently a nostalgic one. This might seem odd, given that people have been diagnosing the crumbling edifices of modernity ever since Marx’s famous pronouncement that “all that is solid melts into air” in The Communist Manifesto. Walter Benjamin called modernity a hellscape characterized by “eternal recurrence with novelty” around the time that the young Eco was reading the comics he eulogizes so evocatively in his novel, The Mysterious Flame of Queen Flame, which makes his reader wonder, where does this unrequited longing for an untainted and innocent past even come from? 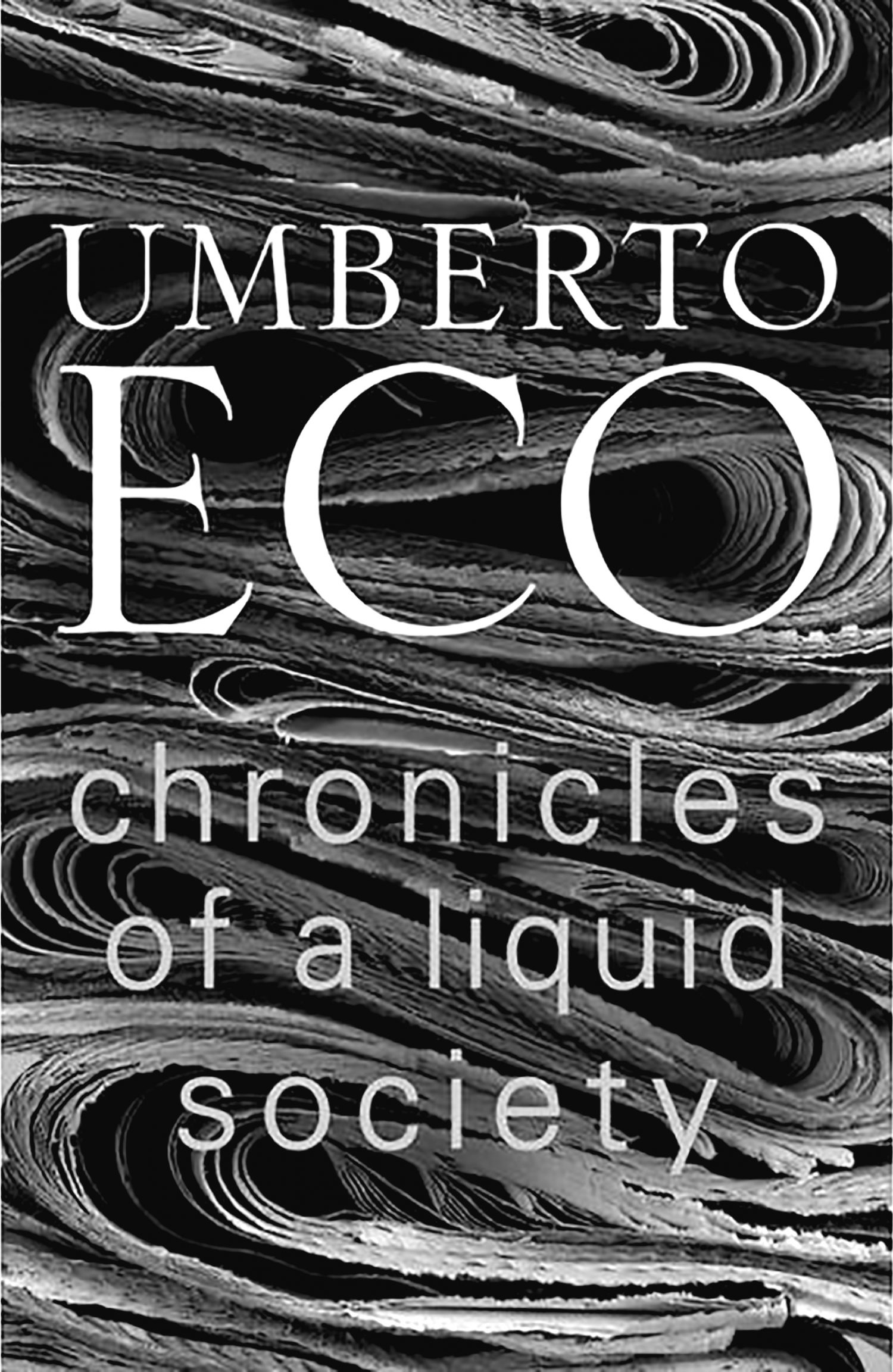 The drift of Eco’s rhetoric makes more sense once you begin reading Bauman’s thoughts about liquid societies in his final book, Retropia. At some point in relatively recent history, Bauman suggests, time turned on itself such that dreams of progress transformed into a longing for a return to the (presumed) certitudes of the past. Bauman doesn’t specify precisely when this happened but he emphasizes its political implications, especially around questions of recognition, and certainly the traces of this turn are easily mapped onto our political landscape.  Neither Eco nor Bauman are very convincing in their attempt to present this turn to nostalgia as a distinctively new mode of political or social life, but they are less interested in proving novelty than they are in insisting that its rise is uniquely correlated with a certain crisis of sovereignty: that it is the fading promise of the nation-state that is prompting this longing for a lost community. The appeal of such revanchism is even more obvious in our political landscape: Hillary Clinton and Donald Trump both campaigned on the idea that we inhabit a liminal and unstable present, a moment in history that cannot last. Clinton ran on the idea of an inequitable past, characterized by racism and sexism, and emphasized a vision of gradual but inevitable and successful change. Hence the arrow in her campaign slogan, “I’m with Her!” Trump’s slogan reversed that teleology, replacing anticipation with nostalgia in his rhetoric, and we now live with the consequences of that victory, however narrow and corrupt it was. 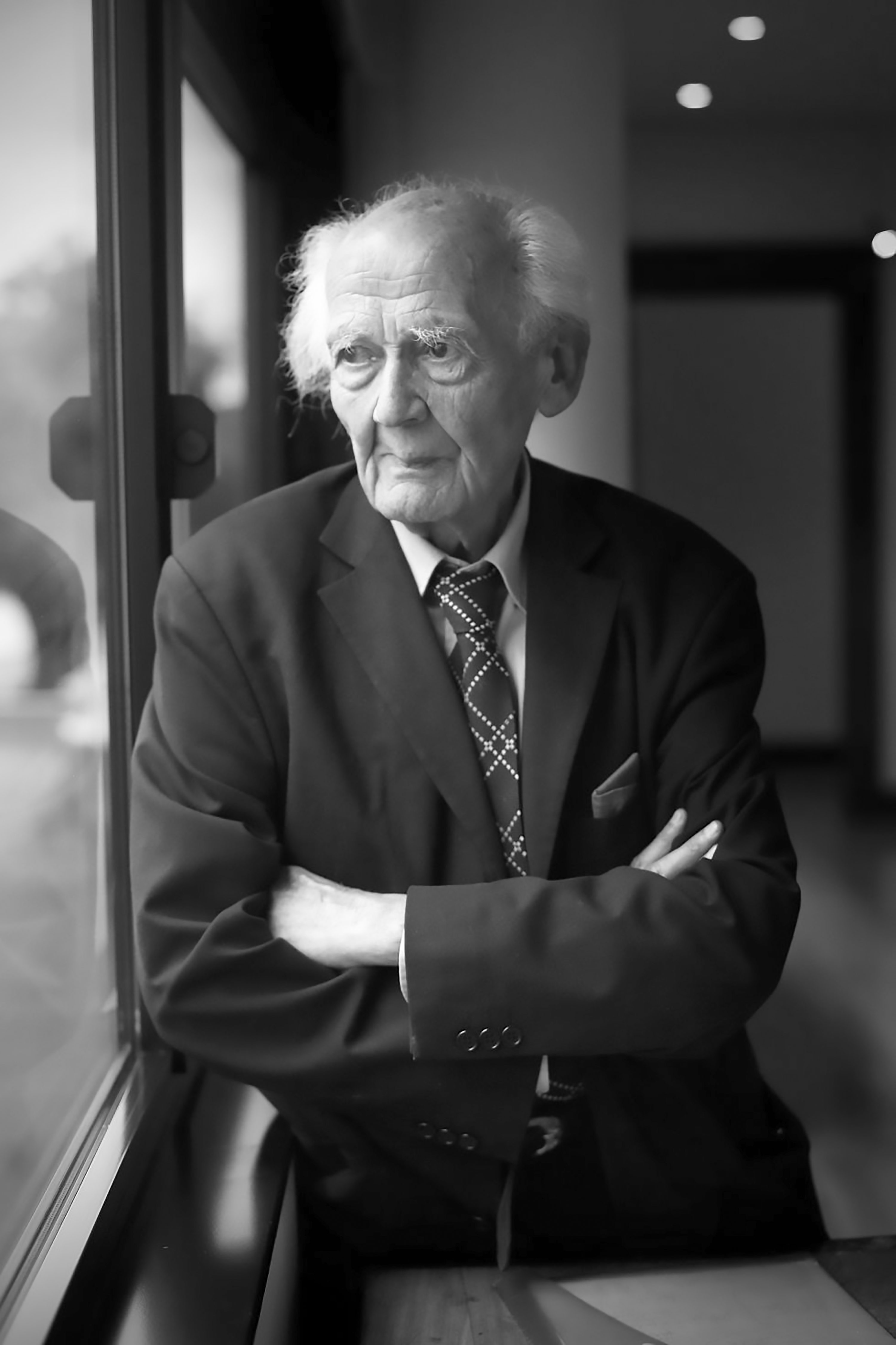 It is not for insight, however, that I began reading Bauman and Eco. It was to make sense of their passing from the world we shared. It can be hard to escape the feeling these days that we are living in the afterlife of the apocalypse: that we have inherited a reality we can neither alter nor even analyze, and which we can only inhabit as passive subjects constantly confessing our sins to an indifferent audience. We live these days with the sense of being perpetually too late, and confronting this diffuse and enervating emotion with the rigors of what Edward Said once called “late style,” a style at home in its untimeliness, can be the bracing dose of skepticism we all occasionally need to recover from such cynical funks. Said developed this theme in what would be his own final (and incomplete) book, On Late Style, in which he describes his affinity to the “intransigence, difficulty, and unresolved contradiction” that haunts such works. Late Style, as he understands it, is the work of a mature artists grappling with their mortality; artists who have, in effect, outgrown themselves. “Lateness” he writes “is being at the end, fully conscious, full of memory, and also very (even preternaturally) aware of the present.”

What Said finds appealing about late style is the defiance of death— artistic death, physical death, social death— even as it grows impossible to ignore the reality of it. This tension, for him, produces a critique that is brittle yet brilliant, an art that survives the moment that nonetheless saturates it. We have great need for such art in our era, and Eco and Bauman don’t entirely arrive at the paradox of exiled belonging that animates it in their final efforts (Eco’s final novel, The Prague Conspiracy, is perhaps a more fitting addition to the canon). But these have been months of great loss, and there are many last books to choose from. The one that comes closest to achieving Said’s exacting standards is Ursula Le Guin’s No Time to Spare. 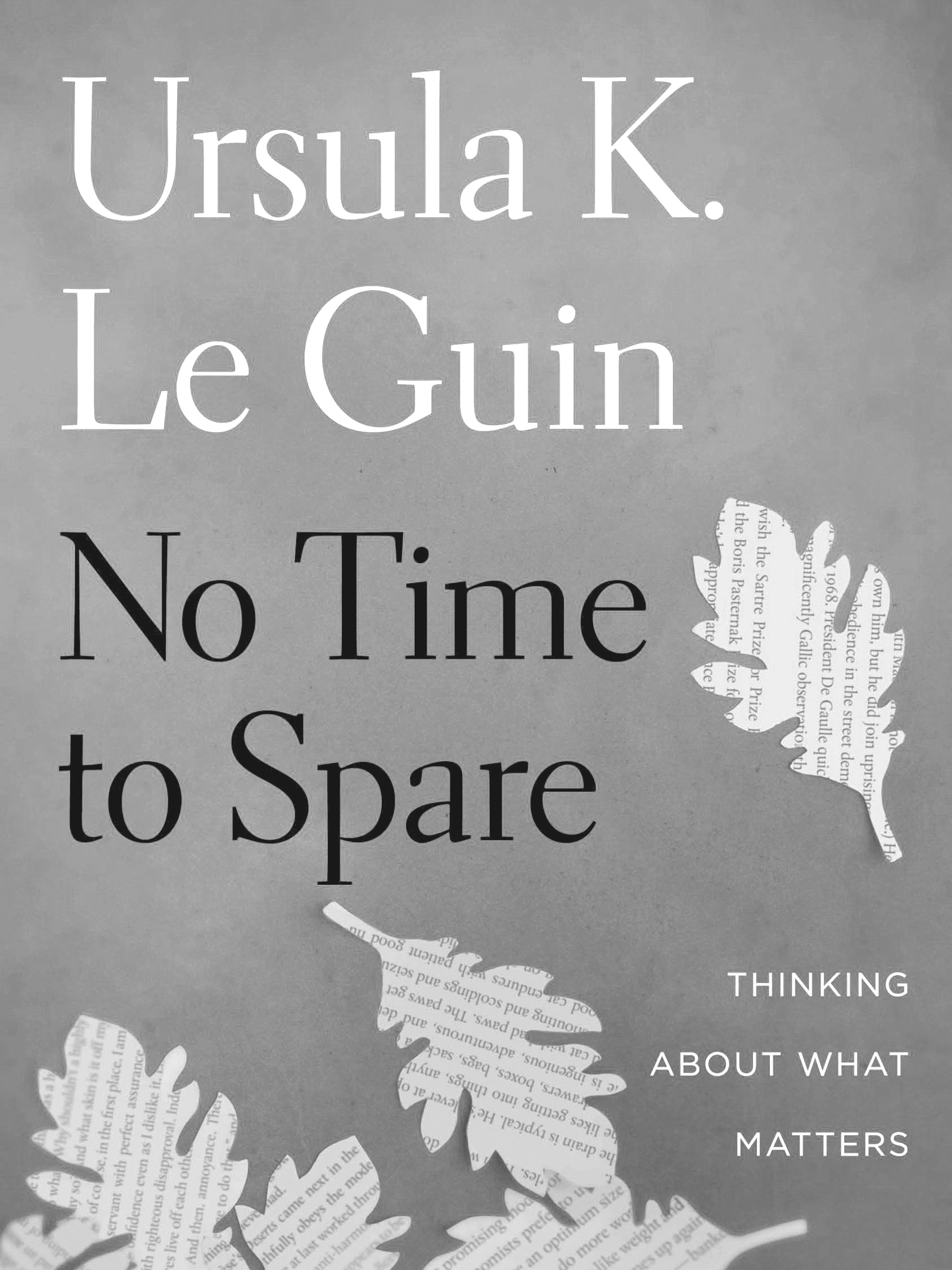 No Time to Spare is, like Chronicles of Liquid Society, an anthology of incidental writing, and it is, if anything, even more loosely organized. Essays about her cat nestle alongside eulogies to her secretary and reflections on Homer. Yet the spiky spirit of the book is evident throughout, as is her persistent unwillingness to let mortality overwhelm her into nostalgic dreams of return. Occasionally, she confesses, she feels like she’s living in someone else’s country, but “a glimmer of the anthropological outlook keeps me from believing that life was ever simple for anybody, anywhere, at any time. All old people are nostalgic for certain things they know are gone, but I live in the past very little. So why am I feeling like an exile?” There is no complementary urge, however, to evade complicity in the alienated and alienating world: this is the world we made, she insists, “clinging desperately to the metaphor of growth,” and the only question to ask is how to ensure that it becomes, in turn, a past to which we will not— and should not— return.

Le Guin does not answer the question, nor can she. That is the task of our generation. In her most pointed social critique, “The Inner Child and the Nude Politician,” she offers us a hint, suggesting that the valorization of children as sites of authenticity and creativity, and the corresponding denunciation of adulthood as stifling and alienating, is precisely why we persistently elect liars and strongmen. A society in which adulthood is indefinitely deferred is one that confuses ignorance with innocence, and growing up, however challenging and exhausting it might be, is the natural right of all creatures. It is certainly true that capitalism infantilizes us, and that its critics are often told to “grow up” dismissively, as if adulthood were only a complacent acceptance of contemporary social relations. But that is not all there is, Le Guin reminds us, and adulthood is about admitting complicity and taking responsibility; it is the ability to participate fully in the world. It is the art of knowing how (and when) to be invisible in a society that privileges outrage and spectacle as the only possible modes of expressing oneself. It is teaching younger people, as we do daily, about the stakes of thinking and acting in the world, training their attention to truths that the powerful and the smug would rather were kept hidden. 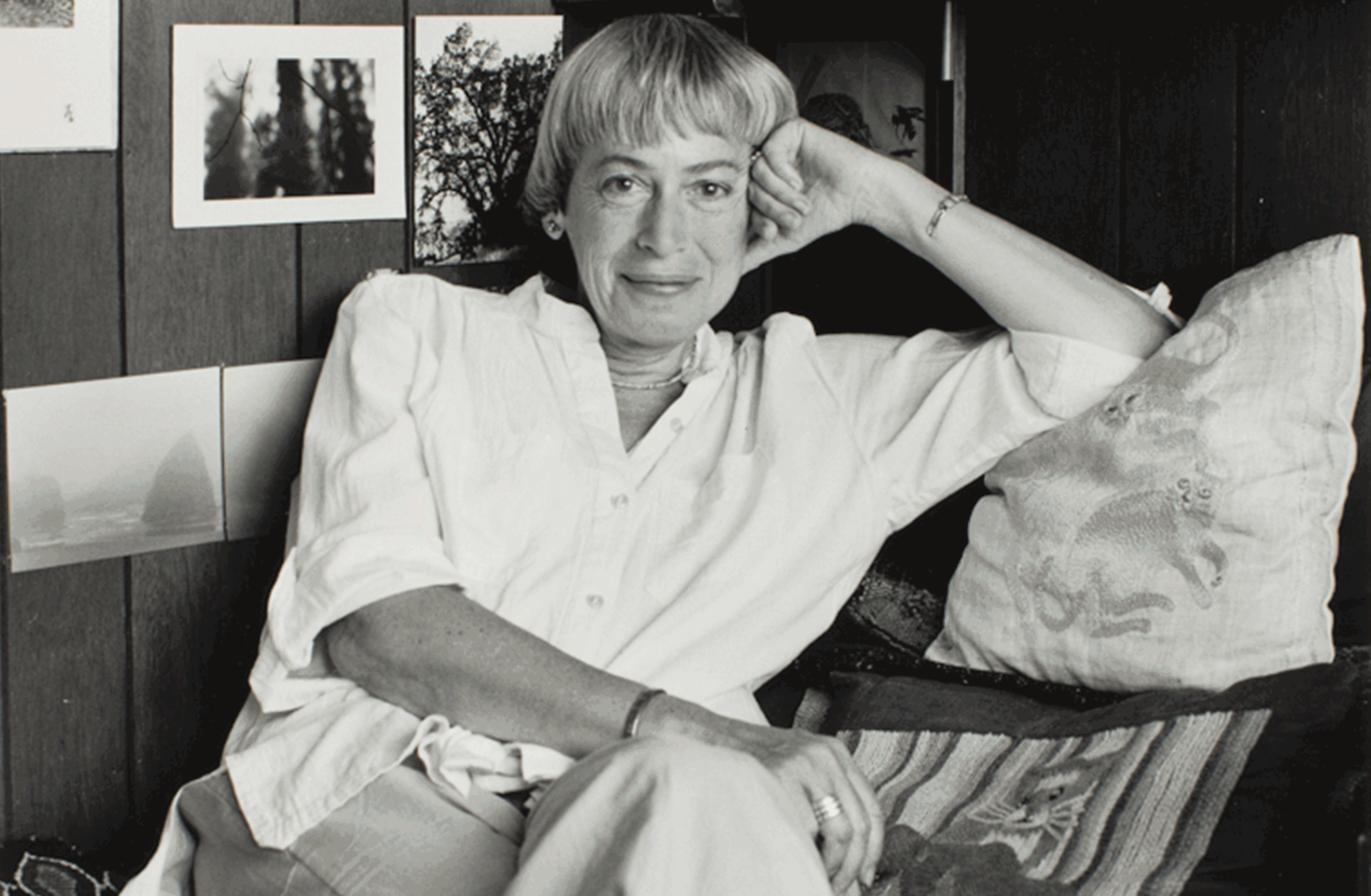 The Advocate’s theme this year has been revolution and sovereignty, and while we have focused heavily on revolution, this is finally a positive definition of individual and collective sovereignty that we can endorse: grow up and own your defiance. We offer stories about activists and artists striving to do precisely that from diverse locations, as well as appraisals of the consequences of failure, hoping thereby to provide tools and definitions and examples that can orient all of us in our quest to challenge the intractable norms that so often seem to foreclose our collective future.