I. a. The universe has a beginning and an end in time and space.

b. The universe is unbounded in time and space. 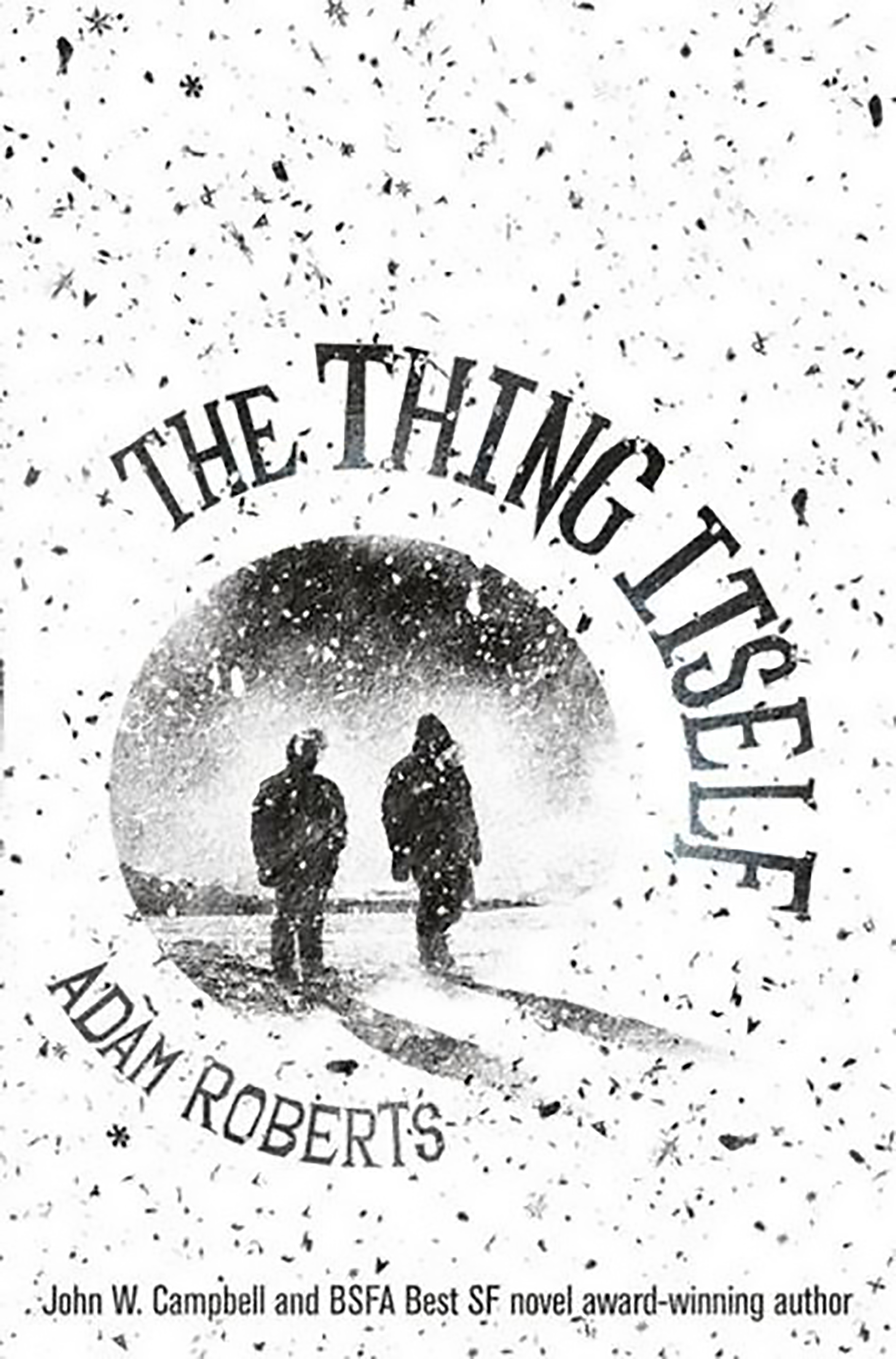 In the 1990s, underground cartoonist William Barker published a series of black-and-white, single-panel stick figure drawings. The subjects of these panels populated a variety of daunting, visually distorted landscapes pockmarked by flying saucers and interdimensional portals. Settings ranged from the familiar (grids of cubicles, suburban neighborhoods, city streets packed with billboards) to the alien (extraterrestrial deserts, abstract geometric planes) with a seamless continuity. Barker grouped these panels under a loose narrative about the “Schwa Corporation,” a kind of ET Enron which systematically intervenes in human affairs for unclear but likely nefarious purposes. The political theorist Jodi Dean described Barker’s illustrations as encapsulating the nebulous kind of paranoia that permeated the US cultural landscape after the Cold War. The alien resides at the core of our world, structuring and connecting every aspect of social reality –– yet it remains a “fugitive truth,” undetectable unless you know precisely what to look for and how to look for it.

Adam Roberts’s The Thing Itself recalls this placement of the extraterrestrial at the center of our world, accessible just beyond the peripheries of human sense-perception. The novel’s central narrative follows Charles Gardner, an involuntarily retired astrophysicist who suffered permanent disfigurement after a close encounter at the South Pole in the 1980s. Charles’s research partner at the South Pole base, Roy Curtius, is certain he’s solved the Fermi paradox: the question of why, despite the high probability of their existence, alien civilizations have never made contact with Earth. The answer lies in the Ding an sich, or thing-in-itself, Immanuel Kant’s conceptualization of reality as being unmediated by the categories of human cognition. We have not made contact with extraterrestrial life because it resides in the Ding an sich, beyond our cognitive rubrics of time and space. This plane of existence remains definitionally out of reach to human beings, but Roy contends it can be accessed by artificial intelligence. During a disastrous experiment to test this conclusion, Roy unleashes an Eldritch horror and leaves Charles frostbitten and incapacitated in the Antarctic tundra.

II. a. Every substance in the world is comprised of simple parts.

b. The world is irreducibly complex; there exists nothing simple.

We rejoin Charles three decades later, when he is approached by representatives from a mysterious, state-funded organization simply referred to as “the Institute.” The Institute hopes to resurrect Roy’s project of accessing the thing-in-itself via artificial intelligence, with the ultimate hope of manipulating it for the British government’s benefit. As is the case with most public-private partnerships, the Institute’s precise goals are ill-defined, obscured by red tape, or both. In the course of trying to uncover the nature of the Institute’s operations, Charles becomes a target of the Institute’s flagship AI, British intelligence services, his former research partner, and a disfigured ghost child, all of whom chase him through space, time, and several extended dialogues on metaphysics.

This narrative is interrupted every other chapter by vignettes from other time periods, whose subjects encounter the same strange entities Charles encountered at the Antarctic research base. This constellation of ancillary narratives enables The Thing Itself to put an engaging spin on the dreary, expository conversations that frequently speckle science fiction. In each of these accounts, we see the same phenomena (or noumena, more appropriately) through the given narrator’s perceptual framework. To the central protagonist, writing in our present, the Ding an sich is explicable as a discovery of artificial intelligence. To Thomas Firmin, a seventeenth century English servant boy, the applicable rubric is Gnostic demonology. To an unnamed bohemian tourist in prewar Germany, H. G. Wells provides the descriptive vocabulary. This fragmentation of perspective allows Roberts to play with the rule of “show, don’t tell.” Telling becomes showing, as divergent explanations of the same Ding reveal the critical gaps between the various narrators’ social and historical positions. It’s a clever conceit, if applied slightly ostentatiously

III. a. Spontaneous action is a precondition of the laws of causality.

b. Causality precludes the possibility of spontaneous action.

The book does contain, however, a handful of worn-out tropes that Roberts doesn’t offer a twist on. It’s unfortunate that the central plot saddles readers with Charles, a standard-issue male antihero whose two defining character traits are jaded flippancy and implacable horniness. The book’s ancillary plots offer a nice respite at first, until one of them slides into a sequence of wholly unnecessary rape scenes. Overall, the role Roberts affords to sexuality is less than inspired, revolving chiefly around heterosexual male frustration with an occasional detour for pedophilia. (That said, it is perhaps to Roberts’s credit that one of the book’s only pleasant sexual encounters takes place between a twenty-second century androgyne and a time-traveling ghost.) While The Thing Itself largely avoids feeling derivative, its depictions of sex definitely lend the enterprise an aura of Vonnegut pastiche, insofar as the novel’s transcendental themes remain firmly rooted in the main characters’ sexual neuroses.

These complaints aside, the core mechanics of The Thing Itself work more often than not. The central plot remains engaging throughout, Charles’s insufferability notwithstanding. The same holds true for most of the novel’s ancillary plots. Roberts is a remarkable prose stylist, and he weaves disparate narratives and literary genres together with ease. Most surprisingly, the periodic discussions of Kantian metaphysics actually work as intended, lending the novel a satisfying thematic coherence without becoming obtrusive or distracting. Often, Charles’s story serves chiefly as a vehicle for ruminations on the structure of human cognition, the in-built limitations of spatial and temporal categories, and the existence of God. These discussions build, narratively and thematically, to a sincerely affecting first-person account of religious revelation at the novel’s climax.

IV. a. There exists an absolutely necessary being.

Nietzsche famously mocked the concept of the thing-in-itself. Kant’s conception of an unmediated reality behind the world perceived by human beings earned him the classification of Hinterweltler, or “backworldsman,” alongside Plato and various Christian theologians. Upon his first exposure to Kant in the Antarctic research base, Charles echoes this dismissal. Kant’s categories of cognition are too tidy, and the concept of a world-behind-the-world is speculative and absurd. The central thread of Charles’s character development is his departure from this line of criticism, his growing acceptance of the limits to his own cognition, and his gradual embrace of a grand design beyond empirical validation.

In the acknowledgments, Roberts describes himself as “an atheist writing a novel about why you should believe in God.” Given Roberts’s periodic tendency to spell things out to fault (the acknowledgments also explain several of the literary and historical references made throughout the novel, in case you didn’t get them), The Thing Itself’s endorsement of Kantian theology is refreshingly subtle. Transcendental realities cannot be demonstrated by logical proof, but this does not diminish them as realities, still less as guides to reason and action.

That this lesson comes at the end of a story about aliens, artificial intelligence, and time-travelling ghosts is not necessarily surprising; plenty of science-fiction has high philosophical ambitions. What is surprising is that it works. In the hands of a less skilled author, a novel like this could very easily crumble into a confused, pretentious heap. It is a miracle that The Thing Itself is fun, engaging, and cohesive instead –– a modest miracle, granted, but precisely the kind of small favor worth thanking God for.