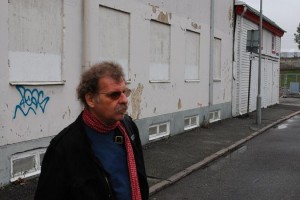 Neil Smith was a communist. Not many people understand what that means in real life. But if you knew Neil, you’d know. Karl Marx himself wrote very little about communism, but in The German Ideology, he laid out an essential vision: Only in community can we truly cultivate our gifts and realize personal freedom. In a real community, people find freedom in their associations.

I knew Neil for a little over ten years. I was never a classroom student of his, and only later did I become academically intertwined. But we entered each other’s community almost instantly.

When I first met Neil, he was the new hot shot at the GC with an academic Center, amusingly named “PCP,” and a big Ford Foundation grant. He was rumored to have a superstar academic wife, who ended up being just as communist and intellectually potent as he. It was in those crazy and open years that I got to know Neil best, mostly as an organic intellectual, and of course, party animal.

O’Reilly’s pub will always bear the imprint of Neil Smith. But also the umpteen nights when Graduate Center folk colonized the place—boozing  debating, and organizing. Neil was a firecracker at the center of those “frenzied pub seminars” (his words) and it was impossible for us not to be friends. As a community, we were a hot mess—but so it goes for people uninhibited by hierarchy and power games. So it goes for people like Neil, unafraid of real democracy, which means that everyone is included, and no idea forbidden.

Neil’s magnetism was associational and affectionate, and his vibrant life force and sharp intellect rendered him a protagonist in our community. He was a focused, disciplined thinker, but also capable of doing unexpected things—cute kinds of things that would make anyone smile. My friend Bruno and I were talking about this a couple of days after Neil died. Bruno said: “I only met Neil once, and I immediately liked him, and liked him a lot. I remember his very friendly and warm manners…But I especially remember the passionate way with which he kissed everybody when he left, including me, whom he had just met—and his solar and beautiful face.”

Neil was indeed solar and beautiful. He could have used the space of our community to show everyone just how smart he was. But instead he radiated warmth and openness. Sectarian cobwebs and intellectual elitism were brushed aside in the spaces of revolution he helped to create. Neil never played the “me professor, you student” game. He did not treat his knowledge as private property.

That kind of love and generosity are the essence of communism.

As my relationship with Neil grew, I got to know other sides of him as well. Neil was a macho, fun-loving man, but he was vulnerable too. His ability to experience and exude intense levels of joy and bacchanal was matched by his capacity for deep feeling and sorrow. He had all of the vitality of which we humans are capable. As much as I admired him, I worried for him too. Such passion can devour a person if left unchecked.

A couple of years into Neil, I began to develop a more formal relationship with him and the Center for Place, Culture, and Politics. It was then that I started to experience his intellectual prowess in fuller form. Clearly, Neil had a natural talent for writing and critique. Or maybe he just worked like a dog. Either way, he had The Gift. Among other things, he was a superb storyteller. I often wondered what it would have been like if he had written fiction. I guess when you’re not trying to show how much you know, and just speaking truth to power—that’s when you enter into the realm of possibility of greatness. Neil started there. He was sharp, honest, and unpretentious—on paper and in life.

In my formal interludes with Neil, I was a fellow at the Center, co-edited a collection with him on states and democracy, and eventually, became his dissertation advisee. We met occasionally at O’Reilly’s, but it was tough to focus on the dissertation. Neil duly presented his review of my work, new reading lists, and homework. Then we’d get to the real business of talking politics, and everyday life.

Shortly into my dissertation, I applied for my first tenure track job at Towson University in Maryland. Neil’s recommendation went a very long way. The dean of the school happened to be a geographer, and as many know, the closer one gets to Baltimore, the larger Neil’s legend grows. A couple of months in, I was set to travel to New York to defend my dissertation, but it was around that time that Neil’s father passed away. He was in Scotland, and I naturally assumed there was no way he’d make the defense. But there he was, just hours off the plane. In a very recent email, I felt compelled to tell him how much that moment meant to me. Because of his strong sense of duty to his students and friends, Neil made such shows of gratitude seem silly and unnecessary. But they were necessary, and I’m glad I took the chance to thank him.

There is a lot more I could have thanked him for. Neil was involved at every stage of my career development: he supported my dissertation process; he wrote letters for every job application; he wrote “blind” reviews of my book proposals (I could tell it was Neil!); and he reluctantly wrote a letter to support the fellowship I am now serving in the US Congress. Of course he tried to talk me out of it: “Aren’t you an anarchist?” But in the end, his response was always the same: “Anything for you, Heather.”

I can’t say enough how generous he really was.

The second to last time I saw Neil, he accepted my invitation to speak at Fordham University, where I work. His was a rock star performance, and the students were especially struck by his clarity, charisma, and candor. He graciously stuck around to meet and greet our community, and everyone left the lecture hall rejuvenated. Neil and I hung out afterwards. It was fun, but he wasn’t himself. In fact, I’d never seen him so blue. I sent him an email that night, hoping to cheer him up a bit, and express my thanks. He wrote back: “Heather, I had forgotten how connected we become when we talk across the political/personal.” I’ll cherish that email for a very long time. It speaks to what connected us to each other, and to our worlds.

A couple of weeks later, I found Neil surrounded by Occupy Wall Street activists, speaking at the May Day Free University, enchanting the crowd with his revolutionary imagination and Scottish charm. It is my last, lovely image of him.

Neil Smith had great style, a vivacious sense of humor, tremendous talent, and a big heart. In both life and in death, he has made me (and countless others) a better thinker. A better writer. A better teacher. And, most importantly, a better communist. I will always remember his warm manners. And I will always miss his solar and beautiful face.

Thank you from the very bottom of my heart, Neil. We love you.