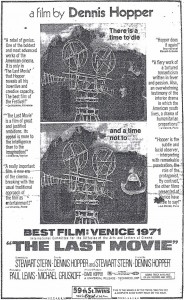 A box-office flop at the time of its release, The Last Movie is one of the strangest Hollywood films ever made. In 1970, the studio system was crumbling, and desperate execs were eager to capitalize on the success of youth-oriented films like Easy Rider. With a $1 million budget and carte blanche from Universal, Dennis Hopper made an unrecognized masterpiece that addresses cultural imperialism, indigenous resistance, and the thin line between fact and fiction. It is an exemplar of radical filmmaking in terms of content and through its unconventional, non-linear editing.

Synopsis: A stuntman dies in an accident while shooting a western in Peru. Kansas (Hopper), the film’s horse wrangler, becomes distraught and decides to stay on after the rest of the crew has left. The villagers reenact the western shoot with two important differences: their equipment is made out of branches (see left) and their violence is not staged. A local priest enlists Kansas’s help in subduing the natives, but it may be too late.

All are welcome to join us for this fascinating film,lively discussion, and light refreshments.