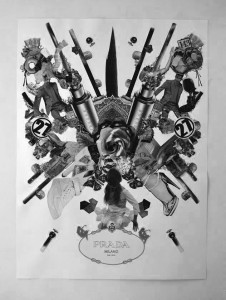 Hinojosa’s sleek and attractive work entails a complex repurposing of distributed and popular images. While these quotidian images are commonly imagined in commercial spaces, the artist often finds them in the same place: the New York trash. Hinojosa’s process for finding art material can be summarized through an anecdote. I remember once walking down the street with him near his apartment in Sunnyside. It was a hot day in August, and each time we passed a large pile of garbage, we momentarily held our breath to avoid the stench. While we walked past a pile of trash bags and discarded items in front of a red-brick apartment building, Juan stopped to inspect the waste. I started to get annoyed as the overwhelming odor enveloped us. He picked up a three-foot tall flat box that once contained some kind of sci-fi sword game, judging from the cover. “Great!” he said. “I’ll used this for my next collage.”

In addition to finding items among trash, Hinojosa also “steals” objects; for example, he takes tags from clothing stores. Additionally, he now finds objects at Materials for the Arts (MFTA), where he is currently an artist-in-residence. He told me that at MFTA, he “feels like a diabetic in a candy store,” but one who would nonetheless eat the candy. MFTA is a not-for-profit organization that makes donated materials available to art teachers and organizations with similar missions. It is located in an enormous warehouse space in Long Island City, which includes the organization’s offices, classrooms, and storage for materials. The available objects are very diverse, and range from furniture to strips of fur. The accumulated donations are arranged in endless rows of plastic and cardboard boxes. I think that it would probably take over a day to go through all the available materials.

In his work, Hinojosa does not segregate the objects found in the street from those collected at MFTA. Because of the vastness of the space and diversity of materials at MFTA, Hinojosa uses the same “hunting and gathering” techniques that he employs in his street searches. He once said to me, “I like to think that whatever I find, wherever I find it, the items, once they become part of my collage, are given a second chance to become something else. In a strange way, the discarded item is having a Cinderella moment.”

This transformation of the image’s purpose and meaning is at the center of Hinojosa’s work. Ranging from installation to framed altarpieces, his collages simultaneously embrace and critique consumerism and commodity distribution. In addition to food networks, Hinojosa explores the implications of religion and sexuality in our daily lives. The carefully chosen found objects transformed into artwork links Hinojosa’s work to Dada, particularly Marcel Duchamp’s display of readymades, which consisted of mundane objects such as a urinal displayed as a work of art. The bright colors and repetitions of commodities recall Pop artworks, most famously Andy Warhol’s Campbell soup cans. Through a variety of items, Hinojosa critiques the consumption of art and the superficiality of the art market. With his address of serious issues comes a degree of humor, found in the caricaturesque forms and medley of images that would otherwise not be imagined together. Hinojosa’s oeuvre to date includes three major methodological transitions: installations, shaped frames, and altar-frames.

Hinojosa’s early works are environmental installations that incorporate found objects connected by globular forms of different sizes and shapes. From afar, the visitor is engulfed by an imagined world consisting of everyday images inspiring hope or greed. Through close analysis, different superheroes, advertisements, and inconspicuous drawn lines are discerned. Hinojosa’s 2010 Battle for Gucci installation at Taller Boricua, New York, extended over two walls, the floor and the ceiling—where a cut-out of Spiderman hung gently. The lines of globular forms stretched out in different directions telling different stories, sometimes through obvious phallic symbols such as daggers and secretions of consecutive small plastic paper clips.

Hinojosa’s environments mirror the central strategies promoting consumerism: to immerse the buyer in a world of fantasy, desire, and hope. As Hinojosa elaborates through his body of work, the superficiality of consumerism conceals its consequences of oppression and inequality. The reiterated images in his work, such as the superheroes and make-up products, hide people and faces that are closer to our everyday existence. His work, in essence, represents the things we use to hide our humanity, which, like garbage, is gritty and full of inconsistencies.

The artist’s organic transition from installation to shaped frames combined both methods in works such as Men in Spandex (Part 2), 2011, which includes a collage on a white gesso canvas surrounded by lines and clusters of globular forms and more collages, with dripping paint and escaping paper clips. In his 2012 solo exhibition, Ready for Their Stones, at Allegra LaViola Gallery (now known as Sargent’s Daughters), New York, Hinojosa created collages on seven-feet tall frames shaped as symmetrical triangles with another triangular indent at the top. Each work was placed in front of its own bright-colored velvet prayer kneelers.

While Ready for Stones obviously critiques the obsessive and devout consumption of clothing, celebrity gossip, food, and pop culture in general, it also mirrors the hypocritical piety historically employed by the Catholic Church to convert and maintain people in the faith. This history resonates highly in colonized places such as the Americas, where images of the crucifixion and the Virgin became as widespread as Prada logos today. Like the production processes of contemporary pop culture and fast food, widespread Christian images too concealed pervasive inequalities and oppression, such as the killing of indigenous people during the early conquest.

Interestingly, Hinojosa equates pop culture to religion in his work. For him, they are empires that employ strategies to elicit constant devotion, creating a system of followers that benefit hegemonic structures. He explained, “As someone who was raised Catholic, I understand devotion; this generation (more than others) seem absolutely devoted to pop culture. I wouldn’t be surprised if someday soon we started worshipping a fictional character as a deity.” Maybe, in some form, this has already happened, as narrated in Hinojosa’s recent work, which brings the collage back to traditional rectangular canvases. Three-dimensional objects including little dolls surround some of these works. This heightened and diversified visualization of commodities translates into an altar to pop culture. The current artworks also include objects collected during recent trips to Berlin and Zurich, such as subway tickets. While Hinojosa’s oeuvre always incorporated globalized symbols of pop culture, through this new integration, he now internationalizes the commodities of everyday life.

Hinojosa’s work can be viewed on his website:
http://juanhinojosa.com/

Hinojosa’s MFTA residency will culminate in Blonde Ambition, a solo show on display from 15 December to 1 April, 2016.

Reviews, Vol. 27 Fall no. 2 - 2015
One comment to “Art Review – From Trash to Gold: Juan Hinojosa and Transitional Consumerism”