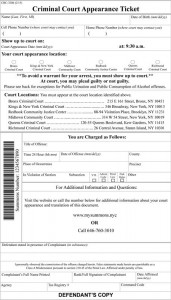 Earlier this month, a young woman woke up one morning, grabbed her schoolbag, and made her way to Wall Street on a day that felt like any other. At around 8:30am, as she walked through the Manhattan streets, she plugged in her headphones and lit a joint. It was early. She was probably tired. Besides, no one really cares about a little weed. She stopped at a red light, waiting to cross the street. Just as she blew out another cloud of smoke, someone tapped on her shoulder. Standing behind her was the leader of New York City’s largest gang – NYPD Commissioner William Bratton – accompanied by one of his armed goons.

As she turned her head, she instantly recognized Bratton. But this was a new day. Bratton didn’t throw this young woman against the wall and slap a pair of cuffs on her, as has been the norm with so many stoners of color in the past. With a heart brimming with magnanimity, Bratton ordered his goon to “politely remove the marijuana” and throw it into the sewer. How progressive! This is all, of course, according to Bill Bratton himself. “We no longer seek to arrest for possession of the drug,” he told the crowd at a New York Law School breakfast. “If you’re smoking it in public, we will potentially arrest you, although we’re encouraging officers to use the scale that they are authorized to use of warning, admonition, summons, arrest if necessary.” But Bratton’s tales of cop compassion obscure the fact that the drug war is still alive in New York City. Small victories made on the marijuana legalization front have hidden the fact that the prohibitionists are still winning and taking many prisoners.

The War on Weed

The progress made in New York on the issue of marijuana has been superficial. Governor Andrew Cuomo’s “legalization” of medical marijuana was a typical liberal reform. Dispensaries are few; licenses difficult to get. Really, not much has changed except that Cuomo can call himself “progressive” on the issue. Bratton announced in November 2014 that the NYPD would take a new approach to weed, issuing more summonses and making fewer arrests. There has indeed been an increase in summonses and a decrease in arrests, but only in relation to Rudy Giuliani’s and Michael Bloomberg’s terms, when pot arrests were sky high and cops were given free reign to ruthlessly wage the drug war. By the end of 2015, more than 10,000 people in New York City will have been arrested for weed.

Throughout the eighties and early nineties, the number of marijuana arrests for any given year never exceeded even 6,000. Bratton and Mayor Bill de Blasio’s police, it turns out, aren’t progressive at all. They’re merely less reactionary than his two mayoral predecessors. As is Bratton’s trademark Broken Windows style, people of color are still disproportionately arrested for weed, and Bratton even raised the specter of reefer madness when he suggested in March of this year that ganja was causing an increase in murders. Police, despite making fewer arrests, still use the threat of imprisonment to impose fear on weed-smokers throughout the city. And sadly, this substance is where the most progress has been made in the drug war.

With their power receding on the weed front, NYC’s prohibitionists found a new substance with which to scaremonger and instill their brand of modern voodoo pharmacology. Whereas demagogic prohibitionists of the past were able to rely on the specter of marijuana and the public’s ignorance of its effects, that was no longer possible in NYC. Too many people had tried marijuana, and the lies spurned by the drug war about marijuana’s dangers had long been debunked. But as a result of this diffusing war on weed, a new illusory monster emerged with which quixotic drug warriors could battle. So-called “synthetic cannabinoids,” which often go under names like “Spice” and “K2,” have become widespread in recent years due to their cheap price and the legal risks associated with actual marijuana. The label, “synthetic cannabinoids,” is inaccurate though. Different brands of the drug consist of smokeable herbs sprayed with an ever-changing variety of obscure, psychoactive substances. Sometimes they are, in fact, substances that mimic cannabinoids. Manufacturers producing these drugs were specifically working towards circumventing laws criminalizing cannabis.

But nothing can stop prohibitionists’ yearning for power. As with real marijuana, Governor Cuomo was at the forefront of New York’s assault on this new substance. Back in 2012, he pushed for Health Department regulations that would ban the sale and possession of “synthetic marijuana” in New York State, even associating it with bath salts, yet another relatively new drug which has been unjustly demonized in the media. “Synthetic drugs are anything but harmless, and this rash of severe health emergencies across the state is direct proof,” he said. “We banned synthetic marijuana, bath salts and similar substances to avoid the disastrous results that occur.”

The “progressive” mayor and City Council recently followed the lead of our “progressive” governor. After allowing the dependably-ignorant local media and Bratton to portray the drug as “weaponized marijuana” that gives its homeless addicts “superhuman strength” and makes them “impervious to pain,” the city’s liberal establishment helped expand the drug war into new uncharted territory. Within the last month, synthetic cannabinoids have been made illegal to manufacture, sell, or possess in New York City, and large-scale drug raids have already begun. And of course, poor people of color, including many homeless people, have been the primary victims of this new drug war front.

Of course, little has changed with the status of drugs like heroin and cocaine in New York City. These fronts in the drug war, for years, have been thoroughly controlled by the prohibitionists despite the total lack of success in decreasing the use and abuse of hard drugs. Heroin, rather than receding, has allegedly made a comeback with overdoses on the rise again in NYC. Drug war enforcement has not lightened up either. In May of this year, NYPD made what was billed as the “largest heroin seizure in New York history.” The cops confiscated more than seventy kilograms of dope that day, and the large heroin raids have not stopped since. Cocaine has not made any alleged comebacks, but little-to-no progress has been made on the issue as well. Large raids on cocaine rings in New York City are still common, and the cocaine business in New York is alive and well. The only thing that seems to have changed is that dealers have found new ways to ship large quantities of cocaine, kids’ birthday gifts and frozen shrimp being some of the more innovative receptacles for smuggling cocaine in recent months.

The status of psychedelics like psilocybin mushrooms, mescaline, and LSD has also not changed at all, with the general public just as ignorant of them as they were when they first became illegal. In all, despite prevailing narratives that liberal New York City has made great advances in the way it treats drugs and their users, the drug war has not changed all that much. And though the legalization of recreational marijuana may be just a matter of time, what then after that? One shudders at the thought of what anti-prohibitionists will have to go through when it’s time to teach people why we have to legalize LSD, mushrooms, heroin, or cocaine. Mere discussion of their normalization is still taboo in mainstream political discourse.

But something must be done. The drug war has too long been another excuse for the mass incarceration of the poor and people of color. The lives of so many New Yorkers have been taken and destroyed due to this war on people’s bodily autonomy. Cops have stolen too much and murdered too many under the ruse of drug enforcement. Too many politicians have made their careers on throwing Black and Brown people in cages for victimless crimes. Enough with laughing off discussions of drug legalization with references to Cheech and Chong. Enough with scare tactics from officials with little knowledge of pharmacology. Enough with cops invading our privacy and inflicting violence on us for daring to determine what goes on in our own bodies and our own minds.

Instead, let’s make this an issue again in New York City. Let’s confront these modern day Puritans with power. Whether they call themselves “liberals,” “progressives,” or “compassionate,” those placating labels only hide their support for a ruthless status quo, an ongoing drug war that continues to stack up casualties. Let’s call them out publicly at meetings, speeches, marches, and all their little PR stunts throughout the city. No prohibitionist propagandist should be allowed to utter a word of their pseudoscience in public without challenge. Let’s stop the relative stasis that this issue has faced for so long and finally start fighting back in this war. We have nothing to lose but our sobriety. We have a world of freedom and intoxication to win.