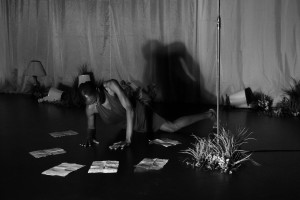 “Okwui Okpokwasili’s dance performance Bronx Gothic was presented at New York Live Arts in late October, returning after its sold-out run at COIL Festival 2014. This 2014 Bessie award-winner piece, composed in collaboration with designer and director Peter Born, will tour the US through 2016, while Okpokwasili has been selected the resident commissioned artist for 2015-2017 at New York Live Arts.”

I suppose writing the words above is how I postpone the inglorious rush of adjectives that I feel about this performance—by resorting to a list of surface facts, a linear narrative, a rational sight. And yet, it certainly does not come close to describing Okpokwasili’s performance and the airtight composition of the whole piece, which stands as one of the most successful dramaturgies I have seen in a long while. The kinesthetic power of her movements collides with the violence of the story she shares and embodies on stage, in a way that constantly suspends the audience between a longing for and denial of revelation. Precisely living up to its name, Bronx Gothic at first promises a personal, confessional story, turning into a quest for the past, but ends up in a collapse of identity. But does it really end there?

As the audience takes its seats, placed on the stage, it is invited into the intimacy of a dreamscape, encircled by off-white curtains and punctuated with traces of schoolyard green, bedside lamps, and empty plastic bags suspended in the air. Okpokwasili is already at upstage corner, twitching and shaking with her back turned and foot firmly on the ground. I smell carnations and sea salt in the air, which strangely attunes me to this twenty-five minute endurance solo accompanied by a repetitive tune that has the sound of something between a violin and a siren. The vibrations from her core and hips set Okpokwasili’s whole body and the violet dress in motion, yet it is never clear if this is a shake of orgasmic pleasure or electroshock. As her body starts to shine with sweat, with the sudden intervention of an upbeat, industrial riff, I cannot help but feel the resonation and radiation of this shake, this wave, engulf the whole space and invade our motionless bodies. We are dancing with her, passively and submissively, to the imposing volume of the strong beat. We go with her rushing flow, we feel our body projected onto hers, we feel almost united… until she breaks into a deep pause.

Okpokwasili’s whole score is punched with these breaks into silence, into song, into storytelling, down to the ground. Punch, or slaps in our face. After the long dance fragment, her first words are that of intimacy, and yet we cannot see her face as she tantalizingly utters, “I want to share something with you.” Who is the “I” here? The voice from this wet body, lit from below the shoulders under a very faint white light, goes on: “notes passed between two girls at the tender age of eleven, one of which was me.” The tenderness reveals its tough and sore sides in an instant as Okpokwasili speaks through the microphone in the voices of a shrill, naive girl and her tougher, more “experienced” best-friend: “What is an orgasm?” “Waves, like waves inside of you.” Their exchange goes on about having periods, pubic hair, sucking dick, swallowing cum, always underlined by the tough girl’s fake street wisdom. And I think, “Ah, the waves again.” During the rest of the exchanges between these two characters, whose love for each other turns into hate and longing, whose queer desire triggers a quest for the uncanny, I constantly fixate on the waves that are exuded from the stage. Okpokwasili’s oral expositions are broken with movement sequences, where she breaks her body in joints, her limbs dropping to the floor in each attempt to get up. The seismic wave of her clash blends with her acapella songs that strangely urge us to connect the story through the bits she reads from yellow notepad papers. The tough girl, channeling maturity in her voice, plays with the key of knowledge of the adult world as she insults her best friend for her ugliness. She suffers from a repeating nightmare, however, and the latter in turn offers her the key to controlling her dreams: “look at your thighs, look at your fingers… touch your thighs, touch your titties, touch your lips . . . now ask yourself, am I awake?” And then, yet another slap in our face as Okpokwasili breaks into a song.

It is possible to watch this spiral of narrating and breaking as a personal (that is, Okpokwasili’s) walk down the memory lane. Yet I feel that the dramaturgy, strongly supported by Born’s set and audiovisual design, emits a subliminal signal to the audience by virtue of the gothic movement of her piece. Yes, it starts as a quest to recapture the painful, violent, desirous relationship with her friend (if we suppose that she is one of the two eleven-year-olds); yes, this at-times rapping dialogue shows the terror of the early adolescent life and sexuality in the outskirts (of city, of class, of gender, of race, of adulthood). However, like the peripheral vision that one of the characters proposes she use to see the other, Okpokwasili beckons the spectator to see in the corner of his/her eye that the actual correspondence and search, the vain love-hate relationship, is between her and her audience. As she breaks from the dialogic form into a more narrative one when the house lights fully open, as she starts directly looking at and addressing the audience, as she assumes and stays in the character of the grown-up version of the more naive girl, Okpokwasili shouts at not only the memory of her old best friend but at us: “I want to slap your face! Get off me! In your face! In your face! In your face!”

At the narrative level, hers is a futile quest to find her friend as the difference between the two characters cracks up; just like the hallmark Victorian gothic, it ends with tears reflected in the shattered glass of a mirror in which one only sees oneself, albeit distortedly. At the performative level, however, this is a quest to confront the gaze, a White gaze that desires and consumes the breaking of a Black body. Such was the gaze that scanned Josephine Baker, for example, whose shakes Okpokwasili mis/quotes at the very beginning. The obscene extremes of sexuality, talks between these pubescent girls, first turn into the obscenity of the bodily fluids that Okpokwasili sheds on stage, and then into the obscenity of our desire to know the end of the story, revealing which character Okpokwasili is in this very intimate confessional.

While she explodes the whole interiority of the characters or the story, what makes her performance uniquely dismantling and affective is her dedicated and exhausting labor on stage, even when she very critically shows and shoves it in our face. Her magnetic movement quality, her sonorous voice, her performative strength washes us down with the fragments, between which our constantly rekindled desire is torn to pieces. Okpokwasili definitely knows how to arouse that fixed gaze and curiosity, and how to abolish it and leave us naked in our pull towards her. She denies the heavily White audience the fulfillment of being on top of what was promised to be a true and personal story, one that would reveal the rough experience of race and sexuality in the Bronx. She denies a climactic satisfaction in which we could forget our own bodies and positions, hence becoming strangely one with ourselves in scopic pleasure. Against the danger of creating a personality cult out of a solo, she makes bold gestures (which at times feel quite Brechtian) to break down a facilitating structure where we could easily read her, as Okwui-the-character and as choreographer. As the characters of her narrative collide, Okpokwasili’s and our positions collide too.

In that sense, when I use my peripheral vision, I see Bronx Gothic as a synecdoche of spectatorial desire for meaning (which is not independent from the desire to capture) and of the Black female body that takes issue with that. The sharp edge of the periphery, in whatever sense you read the word, truly cuts once you ask and shake yourself, as the addressee of all the questions in these exchanged notes, “am I awake?”