Who to vote for in the upcoming election? That is the question. In past elections, the most important things that influenced how I vetted presidential candidates included their positions on wars, national security, economy, the LGBTQ community, and their plans for developing regions like the Caribbean, where I am from. In this election, I would love to consider all those things with equal weight, but it has really come down to the vulnerability of my body. When will I be stopped and frisked? Will I be beaten by the police and charged with a felony if they allow me to live? When will this inevitable encounter with a corrupt police occur? What mood will I be in when it happens? Will I be able to keep calm as most of us have been doing? Or will I punch back if I am hit—sweetly punch back in the tradition of the ancestors who recognized the need to deploy counter strategies that have given me the liberties I cherish today. Indeed, how powerfully will I punch back with fists, body, talk, and silence until I die a death that will be forgotten by you who love me dearly.

For you have your own lives to supervise. And after all, my body will be just another of tens of thousands of black bones, blood, and muscles that will fall and stink and become a ritual of earth to earth and dust to dust, of bible scriptures and lighted candles. Of course you will forget me. And you should! Because my wish will never be that you must keep mourning for all of us. There is too much agony in that task, and too many more of us will continue to fall so frequently. And you need to hold your tears, at least so that you can cry for other things apart from fallen bodies of color. My only wish is that you tell the mourners not to pray for me. Lobby so that they will not light a candle for me. Convince them I need no damn Christianized memorial. Tell them I have been an atheist for a long time and I want to be remembered as such.

In this imagination of the inevitability of my death, my election vetting process therefore contends with the question of—what is Hillary and Donald going to go do to ensure that American consciousness locates more respectable means to manage bodies like mine? I doubt you would disagree that bodies like ours are theoretically, administratively, politically, culturally, psychologically, and globally managed. Where we might disagree is my contention that the best of U.S. responses to our predicament will automatically lead to more management of our bodies rather than allow us the liberations ascribed to white lives from birth.

I am a trying to be realistic, folks. Which means that I am incapable of accessing the luxury of imagination that the saving of blacks lives will be highly prioritized. Please understand that the best I can reasonably expect is that Hillary and Donald will ensure that our bodies are managed with more respect as part of a long-term plan towards full liberation of black bodies. Is this what I desire—more reasonable management of my body versus full-body liberation? Of course not. But this option is something the dominant class will be willing to agree to.

For deep in America’s consciousness, even manifest in our Graduate Center, black bodies are normally given freedom, as long as there is some form of administrative patrolling. This fact points to the very whiteness of the Graduate Center. The hallways are white. The dinning clientele in the cafeteria is white. The elevators are white if there is no one delivering a package or pushing a sanitation cart, or hurrying back from a smoke break to the lowest paying jobs in their departments. The faculty is so white that some people of color seem uncomfortable engaging with other persons of color out of fear that their “colorfulness” will be equivocated with radicalism and potential disruption. To this latter note, I guess that a few persons of color will jump up into ego mode and on to the self-denial train, and say that they are unaware this happens. I dare say, these persons of color are very often the beloved by the marginalizing frameworks of white institutionalism. Frankly, they are very dangerous! Because they lie. Because their lies are very big. Because traditionally, they are among the few who hold big executive positions as they kill pieces of themselves and others in order to get to the top of the food chain. And this is true of many people of color, not just black persons.

But let me get right back to the point about white American consciousness as being responsible for the mass execution of black lives. No need for us to turn to distant history or cite a few authors to support this observation. Indeed there are too many recent accounts of police brutality on black bodies. When black hands are lifted in submission, black bodies are shot. When black backs are lying in in the streets with unthreatening aggression, black bodies are shot. When black teeth are trembling to articulate their harmlessness, black are shot.

What has long been occurring in this country, the mass slaughtering of black lives, a terroristic process authored and authorized by white American consciousness is now amplified by the new video technologies of our day. Even in the face of camera evidence, police continue to narrow down black lives because they know that the nation’s conscience grants them permission. I am not referring to the actions of a small number of white Americans. I am talking about the endemic apathy of the masses that sanctions the racial violence perpetrated by a handful. All my life, I have witnessed the globalization of U.S. images that communicate that there is a genetics of black criminality. The violence of this knowledge production and dissemination has forced even me to try to convince myself repeatedly that black people are not dangerous—that black people are not threats to communities wherever they live. Remember this is why, to this date, many black persons have to chant self-love with lines like, ‘I love my black skin,” “Black and Beautiful,” “Black Power,” and now “Black Lives Matter.”

Of course knowledge (misinformation) can be terror—something that educated, moral, ethnic, and marginalized consciousness have to resist daily in order that it is does not pollute the possessions of truth and self-love. As a black person, I have no option than to struggle against the globally circulated misperceptions of blackness in order that I can maintain the ability to love myself and not fear other black people. In my recent visits to Brazil, Mexico, the Dominican Republic, Panama, Guatemala, Colombia, Puerto Rico, and Costa Rica, I saw that there is indeed a global assault on blackness that is constantly reinforced by knowledge circulation from the U.S. In all of these spaces, I learned that black bodies are among the underclasses. I was also informed that these cultural persecutions were largely influenced by racial occurrences in the U.S. I was warned, in several of these places, not to visit black communities or else I would be robbed. And yes, I didn’t visit some of those communities, because I didn’t have anyone to accompany me.

What a shame that I had to stay away from spaces that had people of my own color! I hope you understand that this incident stripped away pieces of my confidence. To heal, I had to meditate and return to older experiences and postcolonial discourses. I had to engage with a daily task of cultural knowledge rejection in order to acquire self-empowerment. If I am bound to do this constant task of self-interrogation and cultural reflection given my blackness, I will reasonably speculate that the majority of white persons will not endure this daily rigor. Thus, they will cling to knowledges of niggered-existence, knowledges cultivated by plantation genealogies, knowledges that are constantly rejected by the production of enlightened postcolonial discourses but perpetually remain rooted within the America consciousness as credibly invaluable because much of these knowledges articulate American exceptionalism, imperialism, and pride.

From listening to Donald’s convention speech emphasis on “law and order,” it seems clear he intends to continue the process of recirculating dangerous knowledges that mark black bodies with an inherent criminality. This becomes further evident in the way he visits black churches and tells congregation members that they have nothing to lose by voting for him. In articulating this point, Donald is tapping into the way a significant number of white Americans think. He knows that white America will not morally examine the activisms to transform white institutionalism and secure black lives. In explicating his truth, Donald highlights the glaring fact that the Democratic Party has blatantly used black voters during each election cycle when politicians pop up and make many promises. Donald, then, correctly theorizes that Hillary will make only incremental changes that will inadvertently perpetuate the terrorism of black bodies. Understanding this conspicuous white consensus in which both Hillary and himself are participant, Donald also assumes that Blacks are at least smart to acknowledge it. Therefore, he asks, what do you have to lose by trying me? My emphasis here—either way, you are screwed!

In response to Donald’s question, many persons naively or dishonestly express outrage. They suggest that such a line of questioning represents one of the peaks of Donald’s racist declarations. Critics have attacked Donald without basically answering his question. To answer Donald’s question, we want to know what is Hillary going to do to ensure that my death will be delayed a bit longer. From what I remember of Hillary, sometime last year, she had no passion about addressing black deaths. When first confronted by the Black Lives Matter movement, Hillary had basically asked them what did they want her to do. At the time, I agreed with Hillary for asking the question. But soon after, I did my daily ritual of self-introspection and cultural reflection. Automatically, I changed my mind on the premise that if Hillary is running to be president, it is her responsibility to get policy makers and leaders of the dying community together in order to hear their concerns and suggestions. She did this when addressing questions of national security, immigration, and the economy. Yet when it came to saving black lives, she wanted the Negroes to figure out the solution on their own and get back to her. Black lives are not a priority! That was what Hillary was implicitly saying. Bernie Sanders too showed a similar disdain for black lives when he was confronted by the Black Lives Matter movement and couldn’t even remember any of the many persons who had died by police terrorism. To make his disdain more evident, Bernie had a sassy attitude as he threatened to leave the event. Nevertheless, the persistence of the women in the Black Lives Matter movement forced Bernie and Hillary to frame talking points as the months went by. Unsurprisingly, Hillary is now trying to fool the dying black community that she really understands the urgency of the police terrorism facing us. As Maya Angelou says, “when someone shows you who they are, believe them the first time.” I believe Hillary. I believe Donald. So what am I going to do? I am going to go out and vote on Election Day. If there is an option to write my name on the ballot, I will do that. I am going to vote Dadland Maye. Already I can hear some of you trying to convince me that to not vote for Clinton is to vote for Trump. Now, please accept the temperament of my honesty: I really don’t care. 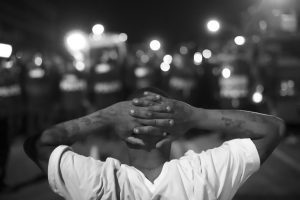