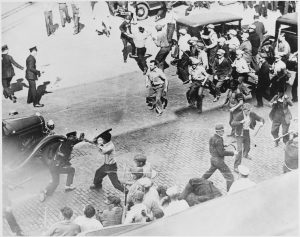 The idea that white working-class men are in any way important to “progressive,” “radical,” or otherwise substantive social change in the United States is anathema to the majority of people who profess to fight for so-called social justice. Since the 1980s, and in increasing intensity over the past decade, a form of identity politics has taken root amongst American liberals and leftists. It simultaneously stresses the inherent socio-political backwardness of white working-class men as well as the progressive nature of oppressed identities (non-whites to vary degrees, women and transgendered, non-heterosexuals, the disabled, and so on). While one can point to correlations between a group’s willingness to fight for certain social gains, say affirmative action, and their collective identity, there remains a general malaise amongst American leftists in their approach towards the white working class, and working-class men in particular.

The white working-class is often portrayed, by liberals and leftists alike, as one of the most problematic social strata within American society, rife with racism and misogyny. For the past three decades, the reaction to this view has been to organize minority and otherwise oppressed communities into discrete groups that fight for the needs of that specific group. This segmentation, despite the rhetoric of intersectionality, forces white working-class men’s whiteness-cum-manhood to the forefront, and their class position is often elided when considering their role in society. With non-whites, the obverse is more often the case, with an attempt to engage all possible identities, such as the stalwart organizing initiated by black working-class trans-women that has received so much rightful praise within leftist circles. The latter are seen in their entirety, with their class central to understanding their politics, whereas the former are de-classed, and more often than not just seen as “white men.”

All of this is not to say there is no validity in observing and appreciating the myriad identities which compose an individual or group, but rather that in the current political climate, white working-class men’s class position is dismissed, such that they are rarely seen as being at odds with the dominant social structure. This view has changed a little since the election of Donald Trump, with the common assumption that it was the disgruntled white working class who voted him into power. This fallacy notwithstanding (it was the white petty bourgeoisie who backed Trump), the white working class is diametrically opposed, in a social sense, to the dominant ordering of society. This remains the case, despite the “privileges” afforded to them as whites and the further privileges granted to men within the community. The United States is a white supremacist and deeply misogynistic society, but it is only in conjunction with the white working class that it can be changed. If one truly believes that cohesive social justice is achievable under the auspices of bourgeois society, then it may be worth it to plod along with the new political paradigm of the Left. If, however, we believe that to achieve any sustainable and lasting social justice—that is, reparatory justice in conjunction with social power—capitalism needs to be abolished, then the white working class is integral to any and all social struggles against oppression, and the Left must shed its recent desire for insular “safe spaces.” We must be prepared to fight for a different society and imagine a revolutionary course that transforms, rather than merely ameliorates, extant reality.

A failure to win over the white working class, and men in particular, will only lead to defeat. While white working-class men have more racialized and gendered social privileges in society, the foundational tenet of capitalism in the United States is class-based social organization. The imbricated nature of class, race, and gender in capitalist societies indicates a distinction between oppression and privilege, two terms that are conventionally presented as antonyms. If one has access to white or male privilege, contemporary political dialogue on the Left tends to suggest that oppression ceases to exist. White working-class men are deeply oppressed in capitalist society, if perhaps not as deeply as working class men and women of varied other identities, and it is upon that shared oppression and exploitation that contemporary capitalism rests. White working-class men must thus be included in the innumerable struggles against the capricious and noxious continuity of dominant social relations. It is only by joining with those who are already dually class and politically conscious that the broader Left and social justice movements can win over others and mount a challenge against those who hold the reins of society.

Are white working-class men misogynistic? Some, if not most, in the United States, harbor at least a modicum of such sentiments. This is not by virtue of their class status, nor is it inherently because of their gender. Rather, it is due to social structures and processes that have historically subjugated women and continue to do so. From the paterfamilias and its retooling under capitalism to the current struggle for equal pay for equal labor, the elite have often pitted the oppressed against each other in an effort to control labor, and this obviously affects the relations between oppressed women and oppressed men. It is important, however, to realize that male chauvinism is not the product of a person’s manhood, but rather of what it means to be a man under capitalism. Consequently, if the social order is transformed, gendered sociability can likewise be transfigured beyond the current confines of gender relations. Identity activists may very well balk at this formulation, but only a cohesive and inclusive social struggle will galvanize wholesale changes in gendered social relations. The current tactic of “calling out” problematic behavior, while fine in an individual sense, does very little to combat the masculine domination of society. And the option of not engaging white working-class men, as many on the Left have seemingly been doing over the past decades (instead focusing their efforts on racial minorities and petty-bourgeois radicals), is not really a viable one beyond merely carving out fragile spaces for marginalized communities. So how then do we tackle the sexism, even misogyny, amongst white working-class men?

The 1934 Minneapolis Teamster’s strike is an instance of white working-class men understanding that their sexist attitudes served only the elite and were opposed to their own interests. An active women’s auxiliary unit participated in the strike (initially against the wishes of the male workers) as well as in several violent confrontations with the police and hired company thugs. It was through this experience that the men on strike began to see women as equal participants in the struggle against their (in this case direct) oppression. Similarly, the “coal wars” during the first two decades of the twentieth century saw the rise of working-class women to prominent positions in the labor movement and struggles against exploitation and oppression (Mary “Mother” Jones for example). These were merely drops in the bucket, and many more such struggles are needed. It is only through struggle, not by pedantically explaining problematic behavior and certainly not divestment, that the white male working class will begin to shed their sexism and misogyny. And only with the overthrow of capitalist society, under which the subjugation of women is a fundamental component in the United States, can the vestiges of such social relations be replaced with more just and egalitarian relationships.

What about the alleged racism of the white working-class man? Most of us know the stereotype—the redoubtable “redneck,” uneducated, intoxicated, violent, virulently anti-black, thoughtless, beyond all redemption. This ridiculous view is the result of vulgar and classist ideas about proletarians perpetuated by the petty-bourgeoisie and the elite strata of society. There are certainly some overtly racist white men; others are less blatant but hold antiquated or flawed views on the question of race. As with gender, however, the race issue as it relates to white working-class men can be overcome, unless they are organized racists like the Ku Klux Klan, Neo-Nazis, National Frontists, or are otherwise involved in fascist or fascistic organizations. The only solution for such organizations is their obliteration, for their members cannot be redeemed; while the majority of people who join these groups are disaffected members of the middle class, white workers do sometimes join as well. Apart from this qualification, white working-class men, and the white working class more generally, can be won over to the side of anti-racism via social struggle, as has been evident on a small scale over the course of American history. From the joint struggles of indentured white labor and African slave labor on early agricultural ventures in the North American colonies, to the union of yeoman farmers and freed slaves who took up arms against the confederacy, to the relatively more recent struggles of the Communist Party in organizing sharecroppers in the black belt, to the work of the Black Panthers (specifically Fred Hampton), in linking black and white workers into a singular struggle, examples abound. This list can go on, citing examples from the struggle to allow blacks into labor unions, white laborers organizing in defense of the Scottsboro boys rape frame-up, and so on.

The conundrum of the white working-class men and how they might relate to broader layers of oppressed members of society is ultimately a question of comfort versus power. The present political reality has led the Left to try and provide oppressed people some space away from dominant society. Yet that isn’t a challenge to dominant power structures, it is a retreat. It is only through the multi-ethnic and multi-gendered unity of the working class that social power can be wrested from the elite, and society can be reorganized to serve the interests of a vast and oppressed majority. If eight years of Barak Obama proved anything, it is that mainstream avenues for political change offer little by way of ameliorating the conditions of racial minorities (as four or eight years of Clinton would have done in the context of gender).

The Left must discard identity politics, because when social contradictions are laid bare, it matters little whether an employer is a woman, is black, is transgender. It matters that they are the owner, and their social role is to reap the profit from their employees. The white working class is currently neither class nor politically conscious. But this should not dissuade those interested in fermenting radical social change; without widespread proletarian support, the longevity of any substantial social advance would only be characterized by its brevity. The Left need not orient itself to the white male working class in particular, but it must be engaged as an integral part of a class that has the social power to challenge the status quo. Abjuring such interaction, or worse, denigrating those who are white working-class men for the fact that they are white and men is a disservice to the liberation struggles of non-whites and non-men. The white working-class man isn’t lost to the contemporary Left, he is merely lacking the class consciousness that would propel him alongside like-minded comrades of divergent identities in order to participate in the conquest of state power and the subsequent reorganization of society.