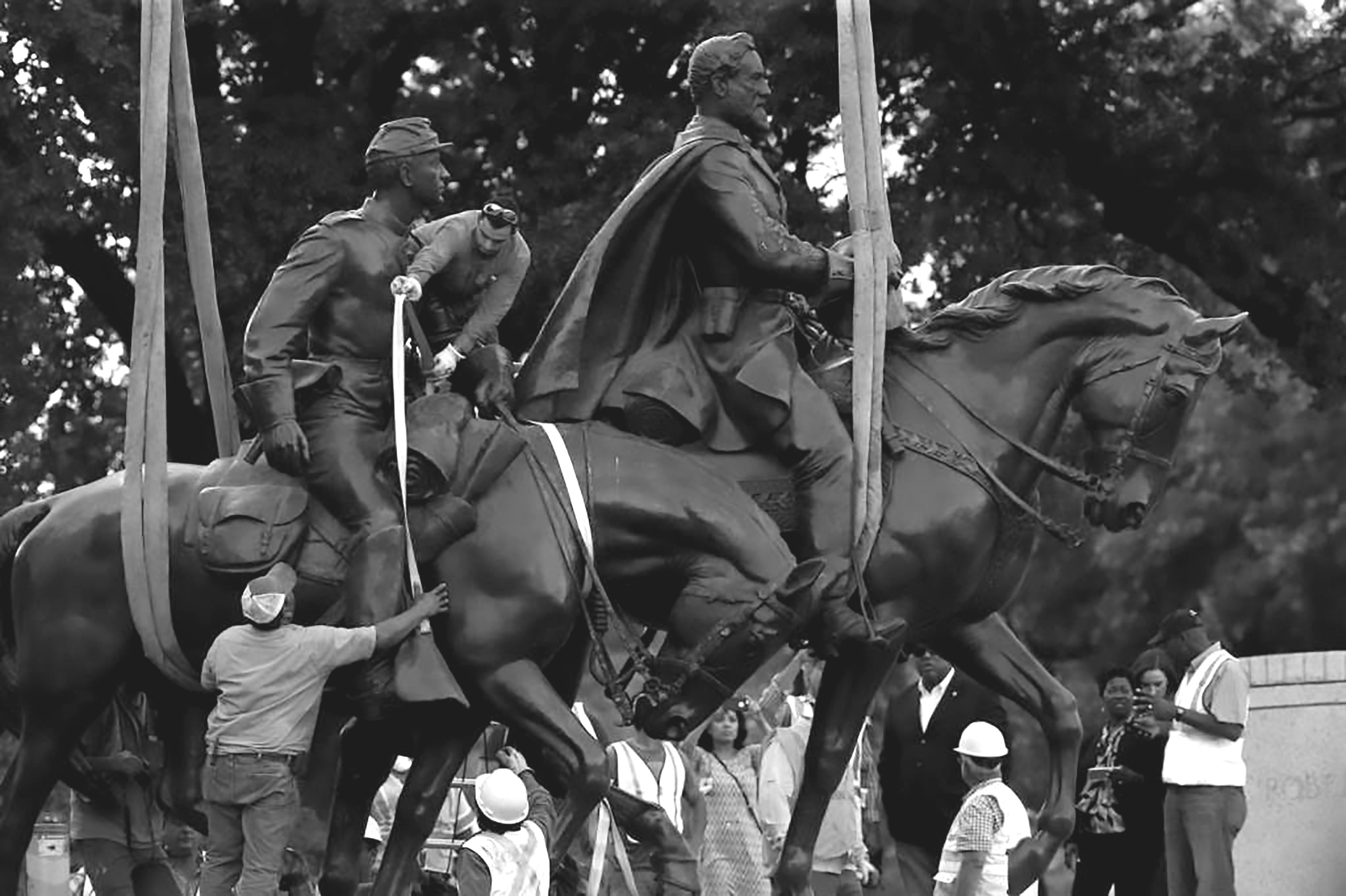 Workers prepare for the removal of a statue of Robert E. Lee at a public park in Dallas, Thursday, Sept. 14, 2017 – Credit: Nathan Hunsinger/The Dallas Morning News via AP

I still remember the first time I walked up the steps from the 59th street subway station and the uncanny sense of disorientation as the glass buildings extended upwards with every step. Just behind me, a silvery globe depicting the world stood in front of the Trump Tower. Beneath the office buildings and shopping center is a monumental column shooting up from the swirling crowds. Atop this monument is a sculpture of a Christopher Columbus: his posture is stern as his eyes gaze keenly into the distance, his mouth twisted in a sort of wry contempt; it is the look of a resolute man with a ton of unpleasant work before him, though this is difficult to discern from the ground. More easily legible are two scenes carved in oxidized copper at the base of the column, which depict Columbus in almost messianic tones. First sailing on a dinghy, with the three famous ships behind him, and then his having made landfall. The scenes portray his arrival in a revelatory motif made clear through the exuberant gestures of each figure towards the heavens.

These are the events and the man memorialized throughout the Americas—the great “discovery” of the Americas. The stark hypocrisy of what this monumental statue aims to signify is felt by those familiar with the history of its location. It sits on Broadway, which was overlaid on the Wickquasgeck Trail, initially carved into Manhattan’s wild forest by its indigenous inhabitants, who were eventually displaced by English settler colonials that ransacked their homes and lands, extracting profit from their labor, and even death.

The statue, at Columbus Circle, may seem devoid of meaning and value for the multitude who encounter the monument with indifference, passing it on the way to more important endeavors, but this is precisely the pernicious quality of monumentalism in public spaces. This is how monuments work ideologically to cement dominant narratives, literally and figuratively, into the unquestioned and naturalized background of the built environment and its symbolic landscape. The reiteration of a (visual) narrative draws from a system of representation that cites genocide as manifest destiny, enslavement as a moral misstep, and the killing of indigenous gods in the name of Christian reason, and it is nested deeply within a cultural hegemony that wants also to remain unquestioned and naturalistic.

We now find ourselves in a moment when these monuments are now being excavated from what Stuart Hall calls their “naturalistic illusion.” This was particularly evident in the series of statue topplings that followed the counter-protests at the “Unite the Right” rally in Charlottesville. The violent rally was held by white supremacists to “defend” a statue of Robert E. Lee that resides in the town’s Emancipation Park, and it ended with a young woman losing her life at the hands of a white supremacist who plowed into a crowd of counter-protestors with his car. The tragic events in Charlottesville and the statute topplings following them have brought the question of public monuments and what they signify to the foreground of many people’s consciousness.

On the Monday after Charlottesville, another troubling statue of General Lee, which was welcoming visitors to the chapel on Duke University’s campus, was brought down amidst a chorus of chants: “No Trump, no KKK, no Fascist USA.” A week later the Hollywood Forever Cemetery removed a statue commemorating the lives of Confederate soldiers, followed by the city of Los Angeles removing Columbus Day from its list of recognized holidays and renaming it Indigenous People’s Day. In Baltimore, statues of General Lee and Stonewall Jackson were removed that week, while in Yonkers a statue of Columbus was reportedly beheaded. Newspapers have since hastily tried to place these events within a larger historical narrative. The New York Times ran a story on the “visual history” of toppled monuments with pictures of fallen statues that included Stalin, George III, Saddam Hussein, Hosni Mubarak, and Vladimir Lenin. They inserted the events of statue toppling within a sequence of the neoliberal imaginary, from the Declaration of Independence to the Arab Spring. Their story implies a chain of historical sequence that explains the statue removals as another birth pang of modernity, with its old ideologies metaphorically toppled with the removal of the Confederacy’s remnants. What has been glossed over are the histories behind the construction of the many Confederate monuments that were built during the era of Jim Crow.

These are monuments central to the formation and maintenance of white supremacist identity. The General Lee statue, the focal point of Emancipation Park, was built in 1924 almost sixty years after the US civil war, but right in the middle of Jim Crow period that stretched between Reconstruction and the Civil Rights movements. The park has been the site of rallies of confederate pride and the KKK. The man responsible for the statue also commissioned, as historian Grace Hall notes, a park for Stonewall Jackson, also in Charlottesville, that was used to push out its black neighborhood, which once kept black labor close to the houses of white elites, but was no longer considered necessary or favorable to white society.

What has been toppled, then, are not vestiges of the confederate ideology seemingly defeated during the Civil War; what is being unsettled are the undercurrents of white supremacy, which has been the foundational logic of settler colonialism, and on which subsequent slavocracies were built. A logic pointing back to the arrival of—you guessed it—Columbus. What Du Bois called the “psychological wages” that whites accept in compensation for their labor alienation or what Cedric Robinson suggests is the racial form capital took because of its roots in the internal rationalizations of domination, in Europe, as it shifted from feudal to capitalist society. These Black Radical scholars highlight what has been lost in media narratives: the intimate interrelationship between white supremacy and labor alienation cemented in and through these statues and their histories. 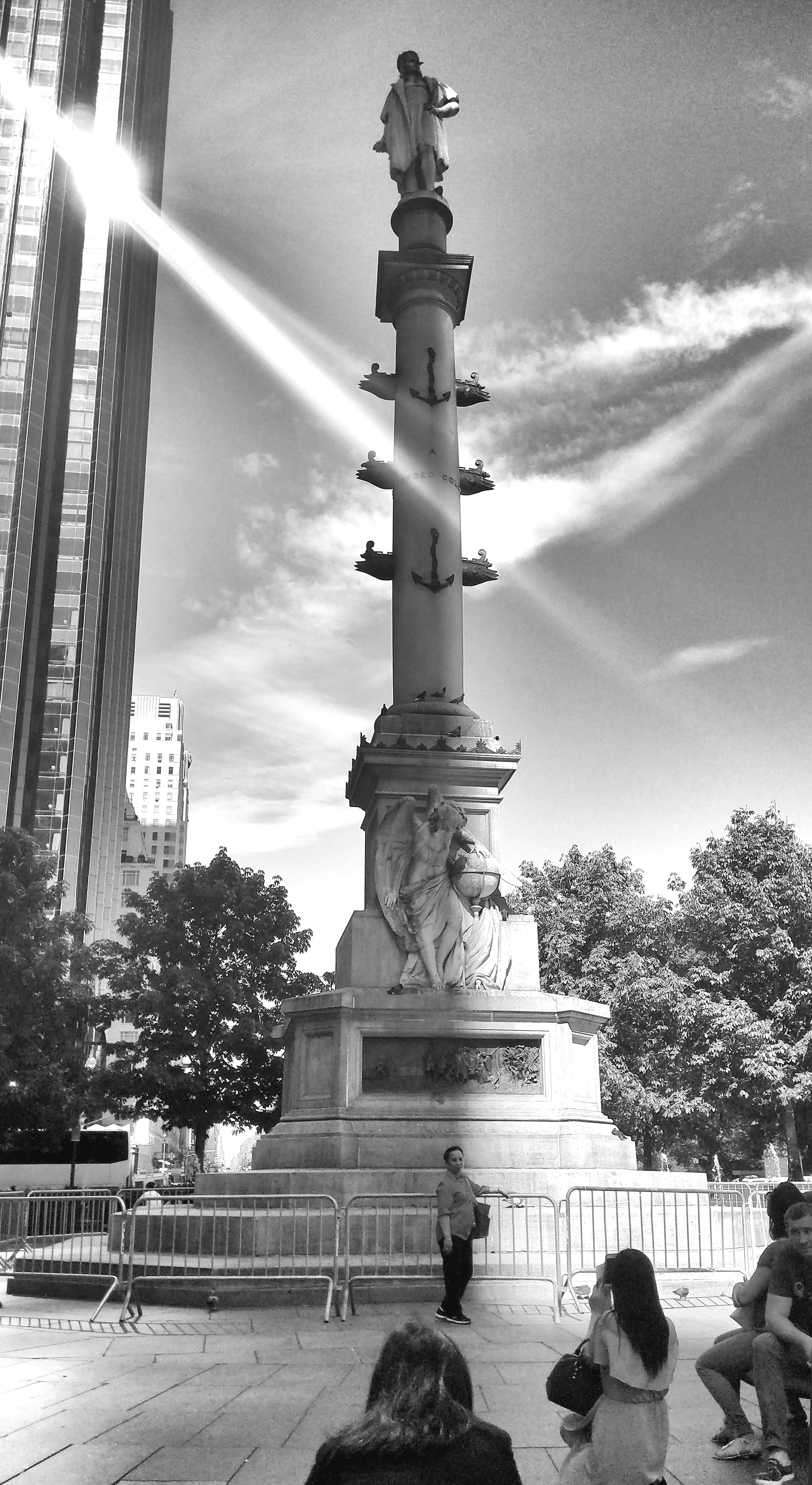 The novelty of statue toppling further erodes once we place the events in historical narratives outside the myopia of US popular thought. The #RhodesMustFall social movement, which has roared through South Africa and England over the past couple of years, has made it a point to remove statues of Cecil Rhodes from university campuses. Rhodes was the British businessman who founded the De Beers diamond firm and was largely responsible for establishing the economic imperialism that plagues South African society to this day. They also have a larger goal: to rewrite South African history after apartheid. A quite different story has unfolded in Estonia, between 2004 and 2007, in which the right-wing government commissioned the removal of several statues commemorating the Red Army’s liberating of Estonia from Nazi occupation. The presence of Soviet-era statues stands in the way of its nationalistic rhetoric espousing the small nation-state as the epitome of neoliberalism gone right. We must not forget the “hippopotamus” in the room, which is what the ridiculously large statue of Alexander III that presided in St. Petersburg square was called. It stood there unmarred by even the Bolshevik Revolution, except for a poem etched into its base, mocking the statue: “I stand here as the cast-iron scarecrow for the country.” It was eventually moved, in 1937, to the interior courtyard of a Russian museum, where it has stayed.

What these events show is the manner in which  (visual) narratives have been pulled apart by social movements, because of the depth (or height) at which certain monuments stand-in as metaphors for the nation-state and shape our historical memory.

These are the stakes of Mayor DeBlasio’s statues commission, also known as the Mayoral Advisory Commission on City Art, Monuments and Markers. Their report is expected by the end of this year and the Columbus Circle statue will most certainly be a focal point. Recently, a protest was held in defense of the Columbus statue by Italian-American identity groups closely associated with the Columbus Day Parade. They would rather the statue recede, again, to the backdrop in the name of identity politics. The city will always be a contested space, where its denizens must struggle, as Harvey explains, “to accumulate marks of distinction and collective symbolic capital in a highly competitive world. But this brings in its wake all of the localized questions about whose collective memory, whose aesthetics, and whose benefits are to be prioritized.” If we have learned anything from the past few weeks, it is that contesting the presence of statues means backstreaming: to swim against the currents of history in which white supremacy has been naturalized, in an effort “to reinvigorate and conserve culture and identities deemed necessary in the political present,” as Audra Simpson argues. These social movements are counter-hegemonic struggles assailing the material effects of capitalism and its symbolic landscape.

When Takiyah Thompson stated, on Democracy Now!, “Charlottesville is America. The sentiment [of white supremacy] that was expressed in Charlottesville is part and parcel of what built this country. And I know that Charlottesville can erupt anywhere,” we can understand her as outlining the overarching hegemony that has shaped this nation-state’s foundation, as well as highlighting the constant struggles erupting between those who want to maintain the status quo and those who want to rewrite history. We must ask then, will DeBlasio’s statue commission reflect the sentiments, orientation, and aim of the anti-racist movement that inspired its formation?

However, I also want to offer a critique, a loving critique, of the statue topplings which have erupted this past month. They are, in some ways, missing the mark. When a statue is removed, certainly a strong statement is made, and one that speaks directly to power. Still, what it leaves is a void of signification and, in many ways, what has occurred was not a rewriting of history but a silencing of the past. Let’s say, for instance, the Columbus Circle statue is removed, what will be the rationale for doing so? And to what consequence? Will it be removed so that local developers—Donald Trump included—can outbid each for the opportunity to put their stamp on the city or will the park itself be removed to make way for a more convenient intersection to expediently transport labor and capital around the city?

What protestors may want to consider is what will replace these statues. In Paraguay, people were similarly faced with what to do with the vestiges of the troubling past: a statue of the dictator Alfredo Stroessner, who provided a haven to Nazis, committed numerous human rights violations, and intimidated political rivals. His statue could not be allowed to stand following his ouster in 1989. Their solution was to give the statue to artist Carlos Colombino who had long resisted the dictator’s cultural wars with irony and corrosive humor. He took the general’s statue, smashed it down, put it between to two cement blocks, and placed it back on its foundation. Just a thought.