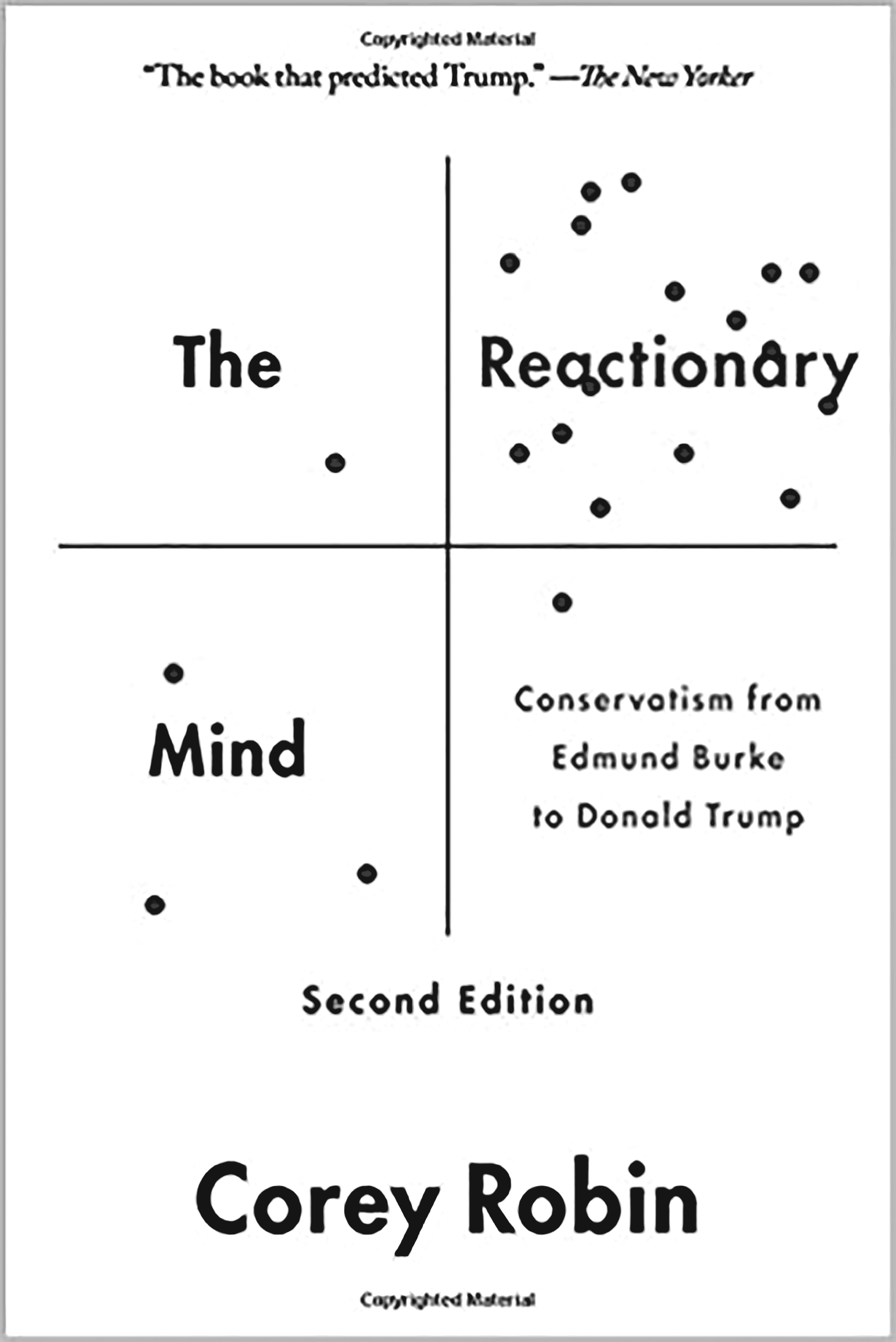 The first edition of Corey Robin’s The Reactionary Mind was published two years into the Obama administration, at the height of the Tea Party reaction. Between the Three Percenters’ armed marches on the National Mall and Glenn Beck’s frantic chalkboard drawings on cable news, US conservatism seemed to have lost its bearings and its dignity. Popular magazines overflowed with laments for the lost, sensible conservative of yesteryear. One of the chief purposes of Robin’s intervention was to demonstrate that the seemingly new, fringe elements of the US right were, in fact, wholly in line with the conservative tradition.

Tracing the conservatism of the new millennium back to its origins in post-Revolutionary France, Robin contended the movement’s philosophical bedrock had never been a temperate “preference for the familiar,” as Michael Oakeshott would have it. Rather, conservatism has always been motivated by a mission to recover privilege either lost or threatened. It is animated not by a romantic attachment to the old regime, but by a desire to dismantle the old regime, purge it of its decadent elements, and radically reconstruct it in a more potent form. This is the conservative project in all its iterations, from the monarchism of Joseph de Maistre to the originalism of Antonin Scalia. One could, as the book’s subtitle indicated, follow a steady path from Edmund Burke to Sarah Palin.

For obvious reasons, The Reactionary Mind has gotten a revised second edition, with a revised subtitle, a scant six years later. The new edition is substantially reorganized, and swaps out a few of the more conspicuously dated chapters on neoconservative foreign policy for newer entries on Edmund Burke’s concept of value, the Austrian School, and (who else?) Donald Trump. The new essays coalesce around a theme largely absent from the first edition: the right’s longstanding project of instilling market economics with the prestige of nation-building. This tendency has been prominent in the Global North over the last forty years as market rationale has come to permeate every part of political life, but its origins can be found well before the dawning of the neoliberal era.

The foundations are laid in Burke’s later writings, where Robin finds a conspicuously modern notion of value. For most classical economists, Adam Smith among them, a clear distinction existed between value and price. The former is intrinsic to the commodity, a substance comprised of the various expenditures of manufacturing (labor, rent, and capital, in Smith’s account). The latter is a practical decision buyers and sellers make at market. Price is thus, at best, a rough approximation of value. Burke rejects this metaphysics, holding that “there is no value to a commodity apart from its price at market.”

In a manner befitting a partisan of the aristocracy, however, Burke declines to banish value from the market altogether, opting instead to relocate it from the commodity to the parties of its production: capital and labor. The relation of capital to labor is a subject-object dyad. Capital decides value; labor has its value decided. Burke’s conception of value is double-sided. When it comes to the commodity, value is price, and price is strictly subjective. But when it comes to class relations, value operates through an objective and immutable “chain of subordination.” As Robin sees it, this is the inaugural statement of conservative economics: an affirmation of market spontaneity, propped up by fixed social hierarchies. 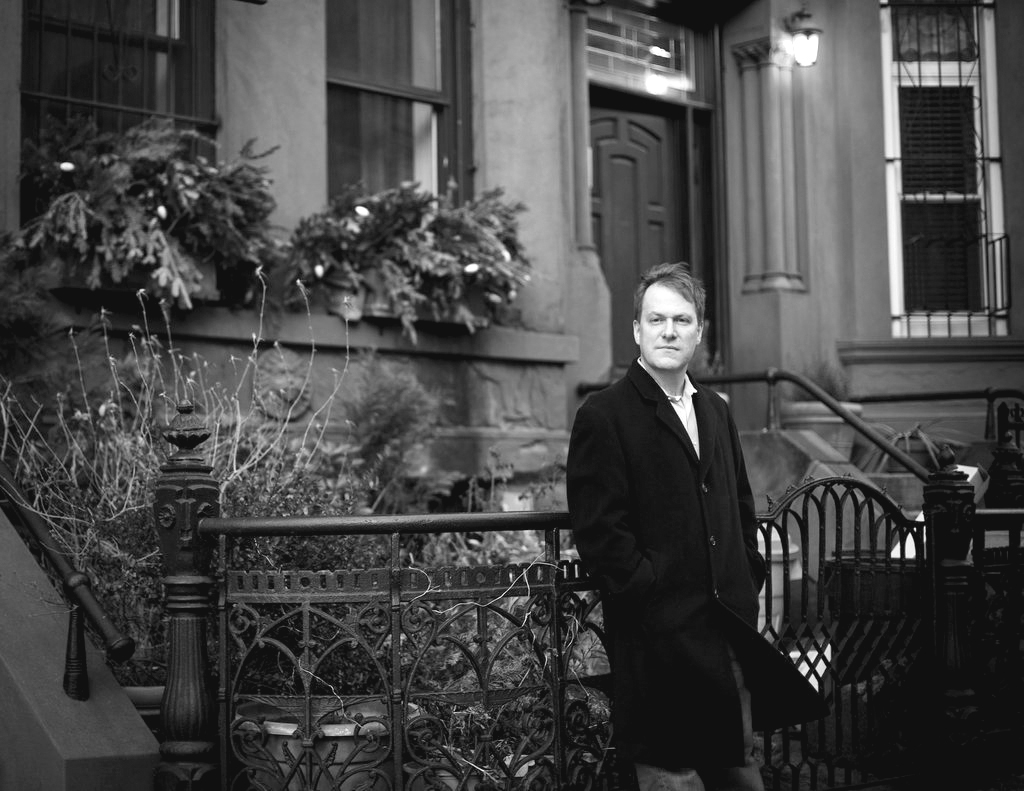 Corey Robin outside his apartment in Park Slope. Hostile reviews of his new book, “The Reactionary Mind,” have prompted much back and forth on the Web – Credit: Sasha Maslov for The New York Times

Burke’s notion of commodity value as a subjective determination made at market becomes central to the marginal revolution and reaches maturity in the work of the Austrian School. Figures of the former, such as William Jevons and Carl Menger, theorize a more consistent system of the processes by which all market values (not just commodity values, but also the values of labor and capital) are spontaneously and subjectively decided. In turn, Austrian School economists, like F. A. Hayek, develop this system from a technical into a moral one. The Hayekian market is an ongoing “drama of choice,” wherein individuals are compelled to determine their own hierarchies of desires and work to fulfill said desires to the best of their ability. The market is thus transformed from an expedient site of exchange to “the disciplining agent of all ethical action.” For the Austrian School, Robin contends, the market gives rise to a Nietzschean “great politics” of strength, mastery, and civilization-building. It is the realm in which both economic and cultural values are decided, the realm in which great men are made.

This brings us to the obligatory final chapter on Trump. Like the first edition, the newer, shinier Reactionary Mind sets out to combat conventional wisdom. In the aftermath of the 2016 election, once-maligned elements of the US right enjoyed a tremendous rehabilitation in liberal outlets. Neocon hardliners like Bill Kristol were rebranded as “moderate” voices against Trumpism. Glenn Beck found new allies in Samantha Bee and The Atlantic’s editorial board. New York Magazine celebrated George W. Bush for (reportedly) calling Trump’s inaugural address “some weird shit.” However strongly one may object to them, the implicit consensus now ran, yesterday’s conservatives were of a finer breed than Trump.

Robin contests this consensus at length in the second edition’s closing chapter. Little about Trump is especially novel, he notes. While “the racism of the Trumpist right is nastier than its most recent predecessors,” it finds ample precedent in Nixon and Reagan. While Trump’s “freewheeling disregard of norms and rules” is unusually pronounced, a performative aversion to business-as-usual has been common on the US right for generations. Ditto for Trump’s faux populism and his cult of elite victimhood. Trump is not an aberration, but an amplification of currents long pulsing through the conservative vein. What needs to be explained is thus not where Trump came from; his origins in the movement are plain enough. Rather, the question is why US conservatism gave rise to a bloviator like him in 2016.

Robin’s answer comes in three parts, the first two of which are not entirely satisfying. First, Trump’s “mix of racial and economic populism” spoke clearly to “the lower orders of the right,” assuaging the anxieties of a white working class left behind by the Republican Party mainstream. Its truth-value aside, this is a painfully familiar argument printed and reprinted in thousands of op-ed pages following the election. Robin does improve on the usual iterations of it, correctly interpreting Trump’s “populist” appeal as a factor in keeping old voters rather than mobilizing new ones. Nonetheless, anyone who has read even a modest amount of post-election commentary may feel their eyes glaze over at this point.

Second, Robin suggests that Trump rose to prominence because he most tidily encapsulates the present state of US conservatism: disorganization and directionlessness. This is exacerbated by the absence of a strong left. In happier times, leftist organization provided vital opposition for conservatives, imposing discipline and giving the movement a sense of purpose. As this opposition weakens, so does the right’s focus, and before long it collapses into heap of inconsistencies and epithets. This line of argument follows a central thesis from the first edition – that conservatism is most successful as an opposition movement – through to its logical conclusion. As Edmund Burke remarked of the French Third Estate, US conservatives have found punishment in their success. In the process of triumphing over the left, they have become fractured and unmoored. This is how we ended up with a Republican Party that controls the House, the Senate, and the Presidency, and still remains unable to enact most of its agenda.

Third, and most pertinently, Trump brings to a head a key riddle of conservatism generally: he reconciles “great politics” and market economics. The neoconservative orthodoxy that preceded Trump emphasized war-making and state-building over market expansion, adopting “two cheers for capitalism” as a catchword. The free market was a social good, certainly, but not a good-in-itself. For Goldwater and Reagan, it was legitimated through its utility in the Cold War. The free market and an “adventurous” foreign policy were parallel dimensions of the fight against Communism. Even after the end of history, war-making remained the dominant modality of US conservatism. In the second Bush administration, unfettering the market at home took a backseat to fighting terror abroad.

In the shadow of the Great Recession, however, with all the bubbling discontent it fostered, the conservative balance between economic and foreign policy became increasingly uneasy. Trump resets this balance, sinking great politics into the economic domain. For Trump, the market itself is the terrain of momentous power struggles, of heroism, and of national glory. Trump’s promises to restore jobs, restore “fair” trade relations with Mexico and China, to restore the coal industry, etc., are promises to restore honor. They are promises to return each link in the “chain of subordination” to its proper place. Trump’s anti-elitism consists not in a condemnation of elites generally, but a promise to reestablish a ruling elite comprised of only, as he puts it, “the sharpest, toughest, and most vicious people in the world.” The refiner’s fire of market competition will purify the social body, restore order to the nation, make it great again.

An abridged version of the chapter on Trump has been published in the latest issue of n+1, under the title “Triumph of the Shill.” Presented in that rhetorical context, as a standalone piece of commentary, one more drop in the “Leftist Analyses of Trump” bucket, it isn’t particularly striking. Robin centers the essay on a close-reading of The Art of the Deal, which is a clever conceit, but not quite enough to make the piece stand out in the oversaturated Trump Studies market.

This issue is attenuated, however, in the context of the book. One thing the new edition of The Reactionary Mind does exceptionally well is situate each individual essay within a clear thematic arc. The result is a political theory book that feels like a political theory book, whereas the first edition felt more like an anthology of magazine essays (because it was). As Robin traces the twin threads of great politics and bourgeois economics throughout conservative intellectual history, the chapter on Trump appears on the horizon as a natural destination. It is not a climax, but a denouement. It is the vantage point from which the reader may look upon the roads already traveled and, like Benjamin’s angel of history, watch them unfold backward into a single catastrophe.