What do our current displays of anger, rage and hurt communicate? I asked myself this after returning home from another night of protests in New York City. The first protest I attended was Friday May 29th, 2020 at the Barclay’s Center in Brooklyn.  The following Sunday, protesters gathered in Foley Square and marched up Broadway to Washington Square Park in Manhattan. Later in the evening there was another gathering at Stonewall, the historic landmark in Greenwich Village that was once the site of the 1969 gay rights riots. Sunday night’s vigil at the birthplace of the gay rights movement was organized in response to the ongoing violation of black queer bodies – violated for being black, for being trans, for being queer, for being alive.

In the past couple decades, we have seen uprisings and revolutions transpire around the world, igniting movements against economic and political corruption. The United States’ media has displayed other countries’ revolutions as reactionary responses to their governments. The media’s lens’ to these uprisings elsewhere have always been framed as if such reactions could never happen under the sophisticated guise of the U.S government. “Otherizing” the political unrest happening in different regions throughout the world is a subversive tactic used to elicit a quality of forced gratitude for our country and its “good behavior”. The illusionary display of tranquility in the U.S., prior to the most recent protests and the 2016 election, has promoted our nation’s behavior as an exemplar of the ideal, something we have and others need to obtain. On the paper thin surface, we have been advertised as a country that did not need to use the same incendiary measures to generate change, but rather could supposedly find solutions through our steadfast commitment to rational lawmaking and collaboration with well-groomed law-abiding citizens.

Such complicity, however, has caused disconnect, loneliness, a severing of community ties, and a sense of purposelessness. Many have known on an intrinsic level that the current capitalistic productivity-focused lives have left a sense of despondency, questioning for whom such production is supporting if not our neighbors and our sense of high purpose? This despondency is a result of tragic misalignment of more inherent human values like connection, respect, equality, and love. In contrast, the U.S. media-manipulated “heinous displays” of other countries retaliating against their governments are, in their collectivized movements, performing for us how they have subversively maintained communal bonds in the face of the most oppressive circumstances.

The problematic complacency seen in the U.S. to initiate a collective movement toward the dismantling of an unjust political system has been socially ingrained in this country as an acceptable complicity since its inception. This is seen in the obedience of our long-term inaction toward the abolishment of a government that was knowingly built on the ideologies of white supremacists. This long-term inactivity to dissent has resulted in a normalized silence. Many are ignorant of the harm such silence has caused in the consciousness of its people. Our collective inaction has lent to a tacit agreement that to [successfully] exist in America is to passively comply with the country’s conditions of blatant inequality, oppression and racism. 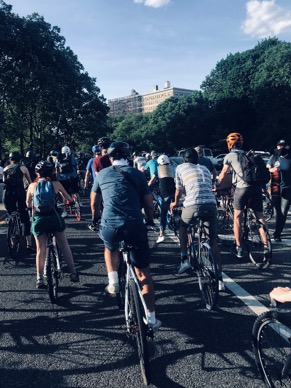 The denial of the systemic inequalities that persist within the United States has led to a prolonged lack of accountability for the overt exploitation of the country’s non-white citizens. This denial has caused Black and Brown Americans to feel they are not being acknowledged or witnessed in their everyday experience of racism. By ignoring a majority of our citizens’ grievances or refusing to understand why they are grieving in the first place, we are participating in validating the traumatic past.

Throughout the 20th century there has been an increased momentum to discuss the insidious lies and traumas that live underneath our feet by way of publications, documentaries, news articles and scholastic offerings. Suddenly, whether it was a result of another black life lost or an unprecedented world-wide epidemic that allowed people to be more receptive, our nation seems to want to confront these systemic injustices on a broader scale. We are only now confronting the racist infrastructure of our country’s foundations in a louder, more overt way, and among a more diverse group of people, than ever before. Perhaps we have finally relinquished ourselves of our adolescence growing pains, and hopefully, have begun to step into a phase of maturation and accountability. 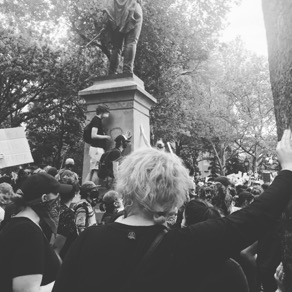 Our juvenile behavior reproduced by our media and pro-capitalist institutionalized education system has contributed to the ongoing illusion that many of us had believed to be reality. The falsified reality that claims we are meant to equally thrive in a “people-powered” democratic political system has disguised the oligarchy, one that has built a magnificent theater to hide it’s convoluted narrative. A narrative that has subtly orchestrated its citizens to invest their annual income in consumerism to successfully continue to maintain a system that is not serving the majority, that is not in support of them.

Our government has preferred egalitarian-infused jargon more than its tangible application. If the jargon were to be applied into our real-life scenarios, the middle and lower classes would experience social safety nets like universal healthcare, social security, and governmental support in times of economic depression. However, the carefully crafted façade of a people-powered government has unfortunately led many to falsely believe the claims that its citizens are supported by our unjust system. The amenities like heat and running water that many, although not all, have access to within the United States, perpetuate this belief of support. The façade of a supportive government has prevented measures of transgression from being taken to disrupt the injustices that many live with on a daily basis. The story that Democracy is a shared power light-years away from fascist dictatorships experienced elsewhere has been taught and believed for far too long.

Even with the strategic political performance that the emperor in office has rolled out over the past four years, in an attempt to continue to disguise the ongoing racial, political, and economic inequalities within the veins of our country, no one is surprised that we are only now witnessing a revolution demanding radical change. The only hope is that this demand for justice- justice for George Floyd, Trayvon Martin, Yvette Smith, Eric Garner, Michael Brown, Tanisha Anderson and all the other Black Indigenous People of Color (BIPOC) who have lost their lives to police violence- is done in an unprecedented way. A way of collectivizing to create new knowledge and act on a new vision that has clear motivations with strategic benchmarks to track progress, in effort to not replicate past movements’ mistakes of wafty goals and shapeless plans that ended in many revolutionaries to be defeated, and returning to the very system that they were initially out to fight. 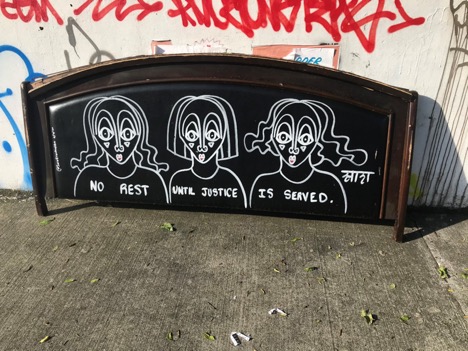 There has been less surprise and more bewilderment as to how it took so long to get to the point of saying ‘enough is enough’. The “Matter” in the Black Lives Matter hashtag is in fact the minimum of what needs to be done. We might be seeing something unprecedented, given that the movement has transpired from conditions we have never quite found ourselves in. Conditions where people were home, out of work, and plastered to social media to witness everything in real time – from the death of George Floyd to the immediate wave of anger in response to losing another black life for no reason, to a nation-wide call to defund the police. One could say the conditions for a revolution and global uprising to abolish systemic racism were unprecedentedly set by way of the COVID-19 Pandemic.

At the same time, perhaps it’s not that the conditions were created as of recent. The conditions for anger, rage, and a demand for recognition of grievances of an entire populace in response to systemic oppression have been laid out since this country’s foundation. But what was set was a nation of people in solitude. Solitude cultivates a space for reflection on what matters. It may have been the very conditions of COVID, and this contemplative moment of history, that birthed a wave of increasingly honest conversation on racism, its denial, and how justice is no longer a choice but a necessity. Perhaps it was these conditions that caused more white people to humbly acknowledge their ignorance, although many of us are still more ignorant than we would like to admit. Collaboration between Black and White activists on the street creating a “white shield” to protect others, or a timely discussion for how White people can use their privilege for the benefit of the movement, has all been long overdue.

Did we have to wait for another death of a Black man, woman, trans-person, or an insidious virus, to finally collectivize in mass numbers in demand for overdue change? Maybe we did need the global pause that COVID had been advertised as, in order for us to be receptive to what hasn’t been working and to be receptive to the traumatic lived experience that many confront everyday of their lives in a racialized country. Although, it must also be acknowledged that this pause was not granted to everyone, as many people did not have such privilege. 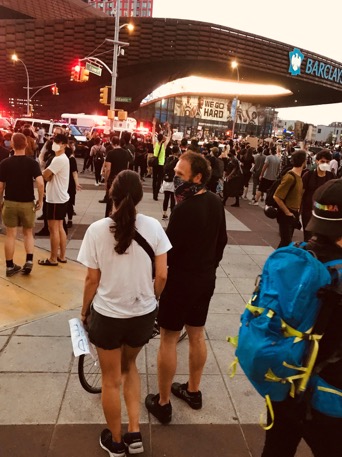 It seems that what was required was an external force that halted the activities of our daily life long enough to be able to witness the criminal acts taking place on a daily basis on our soil. For too long, too many have turned a blind eye or, even worse, were never truly exposed to the oppressive circumstances of their neighbors. We are now confronting the discomfort of many people’s harsh reality, collectively creating more space for a true history to be told.

Capitalism promotes productivity and productivity promotes a siloed existence, one with concentration on the individual over the collective. This busy, self-serving, or capital serving, lifestyle inadvertently keeps a country self-absorbed to the point where many begin to lose the empathetic tug needed to initiate change to bring about justice for others. This is a system that excuses many violent activities in order to have enough capital to survive. This perpetually busy lifestyle serves no one but the oppressor, and we have not been allowing enough time to acknowledge the abuse we have been complicitly perpetuating. Pausing and interrupting its cycle is the only way to break its long-term momentum that it has built over the last five centuries.

Here is a call to continue to overtly acknowledge the toxic oppressive conditions that we have both been under and supporting by stepping into the vulnerable space of the unknown. By shaking hands, by listening, by starting projects that have the potential to initiate not only change, but a distinct and palpable difference. A difference that becomes digested and understood in all of our exchanges, conversations, handshakes and eye contact. Each and every action we take moving forward, if done consciously, has the creative potential to dismantle the underlying belief systems that no longer serve the majority. Paying attention to breath, engagement, softness and receptivity – or lack thereof – in every action are all places to begin. Let us stay in conversation, stay in relation with one another, and stay with the momentum of the much-needed demand for change.