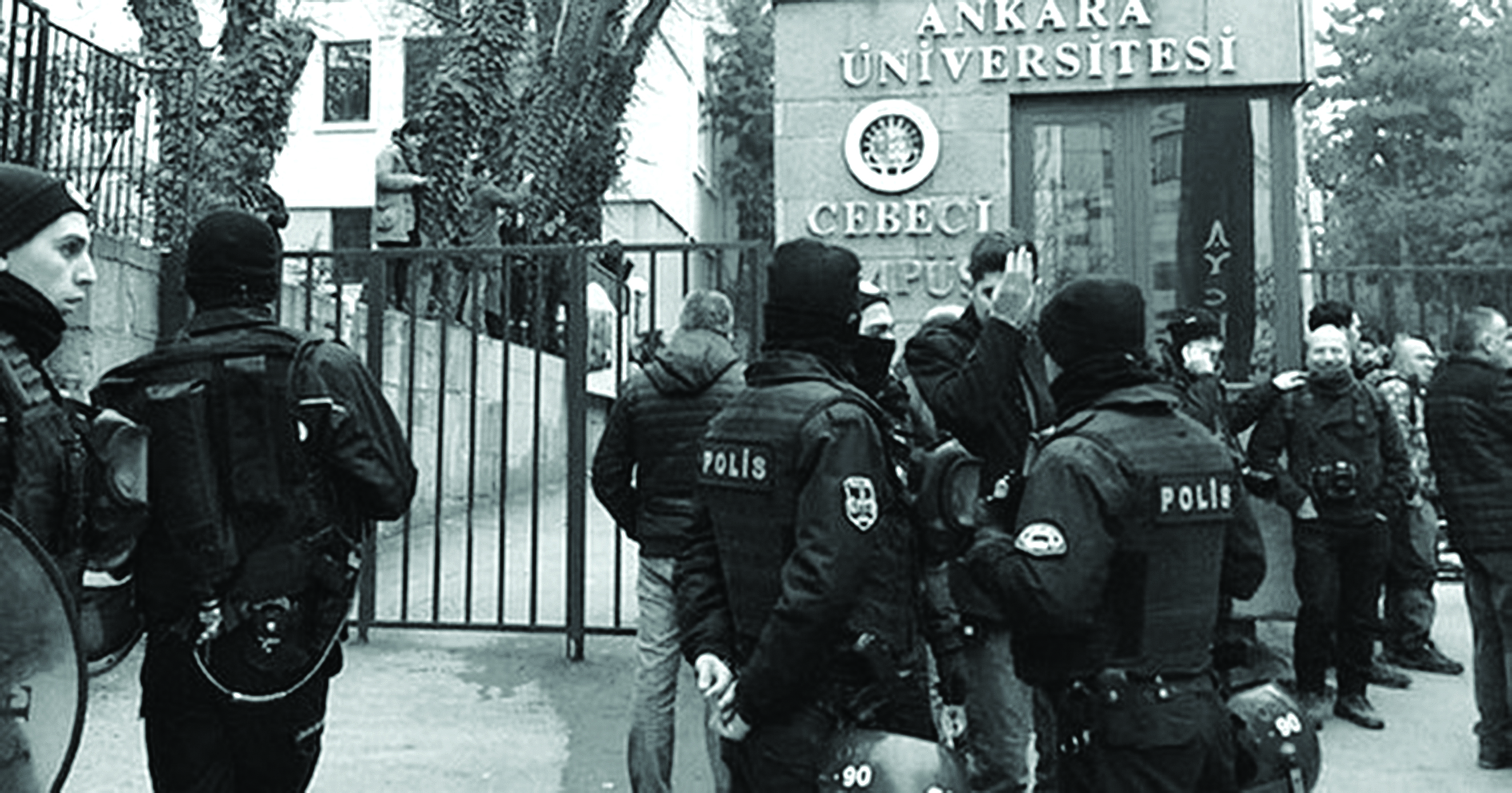 By the state of emergency Statutory Decree No. 686, 330 academics in Turkey were dismissed from their positions on February 7. Half of these educators were signatories to the “Academics for Peace” (“Barış için Akademi
syenler”) petition. Although this statutory decree represents another wave in the larger purge that has been ongoing for more than six months, its scale and significance render it more shocking. With 72 academics expelled from Ankara University alone, the oldest university in the history of the Turkish Republic, the decree deeply affected the Political Science and Communication faculties and decimated the Theatre department. The police attacked a protest organized by Education and Science Workers’ Union. And under assaults by teargas and batons, academics who had worked at the campus for years were denied entry to the campus. A photo captures the anti-intellectualism that pervades the unlawful attacks on academic freedoms: the policemen stomping over the scholars’ gowns. Shockingly, it is the rector of Ankara University, Erhan İbiş, who allegedly provided the names of academics for dismissal, sanctioned the police presence, and accommodated the harassment on campus for months.

Immediately after the failed coup on July 15, 2016, the president Recep Tayyip Erdoğan declared a three-month state of emergency, which remains in effect today. The total number of academics who have lost their jobs by such decrees since then hits 7,316 with the latest one. The dismissals not only expel these academics from their current positions but also ban them from taking another job in any public or private institution, deprive them of retirement rights, and in most cases, suspend passports. This means that these academics cannot take jobs or fellowship opportunities abroad, or attend conferences. Since there is no legal accusation levelled against these academics, they a 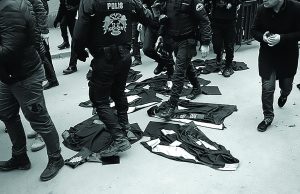 re not indicted or acquitted, but “condemned to a civil death,” as Professor Candan Badem, one of those dismissed in the first wave of the “academicide” on September 1, wrote for University World News.

To contextualize the political atmosphere in which these purges are happening, a summary of the nauseatingly complex events of the past couple of months would be helpful. The government held “Gülenists” (also known as “parallel state” or “Fethullah Terrorist Organization”) responsible for the July 15 coup attempt, although the proceedings of the investigation are to this day kept very obscure. The ruling party AKP (The Justice and Development Party) and its founder and leader Erdoğan had, for decades, openly collaborated with and vocally defended Islamist cleric Fethullah Gülen against those who criticized his followers’ infiltration into the state organs. Due to their conflicts of interest, the AKP and the Gülenist collaboration started to show signs of rupture in late 2013.

As they began to disavow their past alliance, the AKP and the mainstream media framed the Gülenist organization as a terrorist group. This point is important, because as Turkey went back to war with PKK (Kurdistan Workers’ Party), and as ISIS attacks by suicide bombings shook the country deeply, the AKP and its affiliated media channels indiscriminately used the “terrorist” umbrella to incite a constant state of fear and conspiracy in their constituents. It was not until after the failed coup attempt that allegations and massive investigations against the Gülenists began. In the meantime, the immunity afforded to parliament members was also lifted in November, but only to effectively arrest the leaders and members of the pro-Kurdish opposition party HDP (People’s Democratic Party). While the AKP supervised this inordinately disproportionate response to the failed coup, augmenting its already overwhelming hegemony, it opted for a series of state of emergency decrees to detain, arrest, and sack thousands of state officials, bureaucrats, security forces, academics and teachers, instead of bringing those responsible for the coup attempt to court. This way, the AKP is amassing indiscriminate power to suppress any source of opposition during this massive reconfiguration of key institutions. The “Academics for Peace” signatories as well as other scholars who were critical of the antidemocratic regulations are victims of this expanded purge.

Those peace signatories had nothing to do with the Gülenists. In fact, many of them, as secular and democrat scholars, have been against this organization and its coup attempt. Their “crime” is to have signed a brief petition back in January 2016. The petition was addressed to the Turkish State and entitled “We Will Not Be a Party to This Crime” With a total of 1,128 signatories, including international academics and intellectuals such as Noam Chomsky, Judith Butler, David Harvey, and Immanuel Wallerstein, the petition criticized the dirty war in southeast Turkey that has caused hundreds of civilian deaths, razed whole towns to the ground, and displaced more than a million citizens in the Kurdish region. 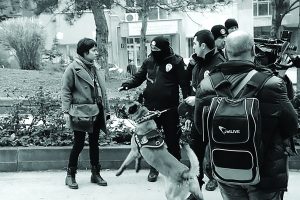 Against these inhumane operations conducted under curfews ongoing since August 2015, the signatories issued a call for the restitution of peace negotiations. Soon enough, the petition and its signatories were publicly attacked by Erdoğan, the AKP members and supporters, and the media, framed as “so-called intellectuals,” “traitors,” “terror supporters.” A declaration in defence of the first petition and a second round of signatures followed up by emphasizing the importance of this call for peace against the shocking public smear campaign. Immediately, five hundred academics ranging from graduate assistants to tenured professors faced disciplinary investigation. Many others were suspended from their duties. More than fifty were taken into police custody in violent and humiliating conditions. And four of them were held under pre-trial detention for more than a month. Those detained were released after the first hearing, and there were several court decisions in favour of reinstating them. Moreover, the ones who had kept their positions were denied promotions, conference supports or national funds for research by Council of Higher Education (YÖK) and Scientific and Technological Research Council (TÜBİTAK).

In a way, the decrees made it easier to punish the peace signatories and other leftist, pro-Kurdish, dissenting voices in academia. So far, a total of 372 signatories have been removed and banned from public service by the decree laws. This excludes the number of forced resignations and retirements. The latest decree is significant. It created the highest number of dismissals related to the “Academics for Peace” petition in one go. Currently, Turkey is on the verge of passing a referendum for a constitutional change that will establish a highly authoritative presidency system. The latest purge, which included experts of constitutional law and political scientists, is painfully symbolic of what awaits the country if the referendum grants Erdoğan the unprecedented one-man rule he seeks. 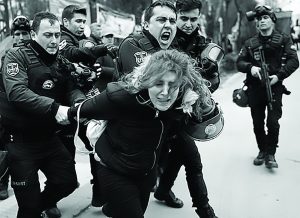 Although academics have historically been targeted and oppressed by the ruling powers in Turkey, as exemplified by the dismissals in the aftermath of the 1980 coup, the extent of the recent attacks to intellectual and scientific freedom is by no means comparable. Yet, the dismissed academics are resilient. Several protests, boycotts, and sit-ins are being organized at various universities across the country. A donation fund provides support to academics who lost their jobs. In Ankara, the “Street Academy” is holding public lectures on Sundays in different spots, especially encouraging workers and oppressed communities to attend. As one of the victims of the February 7 decree, Professor Funda Şenol Cantek, firmly asserts, “the government should worry more now that they expand academia to the streets.”