“There has never been an epoch that did not feel itself to be “modern” in the sense of eccentric, and did not believe itself to be standing directly before an abyss. The desperately clear consciousness of being in the middle of a crisis is something chronic in humanity. Every age unavoidably seems to itself a new age.” 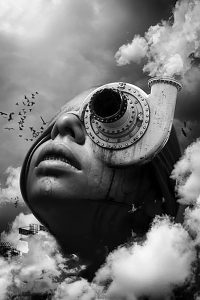 There seems to have emerged a shared consensus of crisis around the now endemic use of the phrase “in these times.” Appended to the most diverse of proclamations, it is deployed in conversations as a self-evident suffix that can explain away the fear and precarity of the present. Any casual exchange on politics is doused with a generous dose of the phrase, most often in the context of the present regime in the United States or the rightward shift in global politics. “In these times” is not merely the innocuous invocation of an abstract present, but an estimation of the present as being an epochal turn from the past and characterized by an urgent sense of crisis. There seems to be a pervasive sense that we now live in a “new age,” one that is as terrifying as it is bleak, with the world “standing directly before an abyss.” How then do we now understand Benjamin’s provocation that the “desperately clear consciousness of being in the middle of a crisis is something chronic in humanity”?

For the Advocate, a newspaper that strives to represent the needs and concerns of the CUNY community, understanding the distinctive tenor of our times is not only its raison d’etre but also the source of its political efficacy. What does “in these times” mean for the students, faculty and staff at CUNY? What precisely has brought us to the brink of this abyss and what is the nature of this abyss? And more importantly, what utopian visions must we articulate that can translate into revolutionary practice and help us leap across this abyss? To produce a paper that truly reflects the needs and aspirations of the community it represents is to grapple with these questions. It is to appraise the particular nature of the crisis of the neoliberal university, and locate it in the context of the larger social and political crises within society.

The estimation of the present lived moment as a crisis has had a long history in modernity, so much so that modernity itself has been variously construed as a crisis; at the most elementary level, as a crisis of tradition. Marx, for instance, theorizes capitalism as a crisis-phenomena, as a social formation that reproduces itself only through crises. However, this promulgation of crises in Marx is marked by a distinctive lack of a telos, where capitalism perpetuates itself through the eternal recurrence of a crisis that is always fundamentally the same. The postmodern turn inaugurated a conception of crisis as chronic to the human condition, with the crisis of modernity manifesting as a crisis of meaning or a crisis of subjectivity. The 2008 economic meltdown and the material consequences that it produced dislodged the concept of chronic crisis from that symbolic register and located it within the context of political and economic structures once again.

There has been a fundamental change in the understanding of crisis through modernity. Crisis, derived from the Greek krisis, meaning decision, originally signified, even till the time of Rousseau, a diagnostic juncture that inaugurated a new revolutionary era and a new consciousness. That is, while it was a destabilization of extant structures and a subversive threat to the status quo, crisis also impelled revolutionary action by signaling the possibility of an epochal change in the structures of society. Our present understanding of crisis has lost this connotation of incipient change. On the contrary, contemporary use of the term crisis, in its signification of a disorderly state of affairs, calls for a return to the status quo and a stabilization of the disruption. Crisis has moved from its original roots in “decision” to denote instead the refusal to take a decision.

It is for this reason perhaps that Benjamin’s provocation still holds force in our time. At one level, Benjamin dislodges the “modern” from its historical context of modernity and applies it to the entire span of human history. More importantly, for Benjamin to proclaim that every epoch perceives itself as enmeshed in the state of crisis is not to trivialize these claims to crisis. He was writing this in one of the darkest periods of modern history, probably even as he was trying to escape capture by the Nazis. To universalize the consciousness of crisis to all epochs is to deploy a concept of crisis that harks back to its radical roots—it is to posit crisis not just as a rupture that needs suturing in the perpetual preservation of the status quo, but as a site of revolutionary possibility that is always palpably close at hand. To paraphrase Benjamin, a crisis is fundamentally a ‘wish image’ for it integrates an affirmative critique of the status quo with the impulse to break decisively from it, thus nurturing a messianic spark that can awaken society from its dream state.

Against such invocations of “in these times” in a tone of fear and resignation—as if the temporal quality of an age manifests independent of human action—there is an urgent need to revive a concept of crisis that places human agency squarely in the center of revolutionary politics. As Willem Schinkel, a sociologist, argues through his reading of Benjamin’s image of crisis, we must move beyond the estimation of the present political climate as a crisis that calls for recovery, and embrace the idea that crisis proffers an opportunity for transformation. The persistent diagnosis of crisis as a call for recovery lacks political imagination insofar as it construes politics as a mere return to the status quo through a management of the problem. On the contrary, Benjamin’s idea of crisis as a ‘wish image’ pushes us to conceive of possibilities beyond crisis and crisis recovery, so as to strike a utopian spark that can translate into a new politics of possibility. 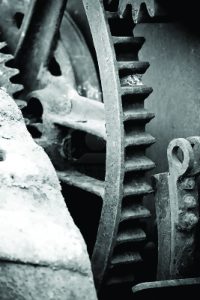 It is this more radical conception of crisis that the Advocate hopes to propagate “in these times,” as it evaluates its own political and ethical commitments to the community it represents. For CUNY stands at a critical juncture in this crisis of the neoliberal university. It was at this same juncture last year, and for six years before that, when the crisis, exemplified by the issue of adjunct labor, was “averted” through a contract that only served to reinforce the status quo. Poised on the brink of militant action (if only for a moment) once 92 per cent of us voted in favor of a strike, the Professional Staff Congress (PSC) leadership ultimately balked and pushed to ratify a contract that betrayed the interests of a majority of its rank-and-file, the adjuncts and graduate assistants. That was crisis as recovery, as a reaffirmation of the existing structures that produced the crisis in the first place, through a superficial management of the “problem.” With negotiations for a new labor contract around the corner again, there is now a pressing need to embrace this crisis as a ‘wish image,’ as an opportunity to break decisively with the status quo in order to inaugurate a new epoch of labor relations in which the interests of the most marginalized and exploited take center-stage.

And it is through this lens of crisis as possibility that we entreat our readers to approach the various articles in this issue. As Rachel Chapman succinctly puts it in her aptly titled essay – “Where do we go from here?” Chapman’s article is a broad survey of the various social movements in CUNY that have been organizing the rank-and-file “in these times” in order to articulate and realize new possibilities out of this crisis – CUNY Struggle, CUNY CLEAR, Sanctuary Campus, among others. Similarly, Joseph van der Naald’s critique of Governor Cuomo’s recently announced, “Excelsior Scholarship Program,” demonstrates how the state’s program for public education proposes tuition hikes on the neediest students in the system in order to pay for the education of middle-income students. Against this state’s perverse vision of education reform, the article also outlines what a radical utopian vision of a free CUNY looks like, along with an articulation of the means and political will necessary for its realization. At the level of the everyday labors of graduate life and teaching, the articles under “CUNY Life” explore through personal narratives the ways in which identities and subjectivities complicate our pedagogical practice even as they open possibilities of conceiving a truly egalitarian and democratic pedagogy.

Finally, insofar as the political efficacy of the Advocate hinges entirely on the strength of its writing, it is imperative that we question the role of writing in the larger project of rethinking crisis in the neoliberal university. For the Advocate, the labor of writing is not only the labor of unpacking the structural inequalities of the neoliberal university in a capitalist state but also the labor entailed in the conceptualization and realization of utopian possibilities, in the articulation of the ways beyond the iniquities of the here-and-now. It is, in essence, the labor of political imagination. Drawing its life force from the effervescent social movements in CUNY, with many student-activists and leaders contributing regularly to the paper, the Advocate strives to in turn inform and enrich these movements. “In these times” of 140-character discourses, the Advocate is committed to positioning itself as a nerve center of a strong community of writers.  This editorial, thus, is both an appeal and an open invitation to the Graduate Center community to engage in the labor of writing for the paper as a means to translate radical political imaginations into revolutionary practice for a new present.