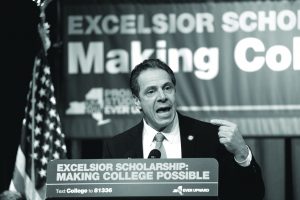 On April 7, Governor Andrew Cuomo announced that an agreement had been reached in Albany over the content of the state’s budget, which had been highly contested and was then nine days overdue. While New York’s new budget of $153.1 billion was touted by Cuomo as progressive, and indeed certain aspects such as the ‘raise the age’ criminal justice reforms are encouraging, numerous critics have rightly characterized the budget as anything but progressive. Cuomo’s proposed Excelsior Scholarship Program is a case in point.

At first glance, the Excelsior Scholarship sounds both remarkable and unprecedented, a welcome dose of higher education reform after a long descent into unaffordability. Cuomo unveiled his signature proposal, which was first announced at a press conference on 3 January at LaGuardia Community College, and claims to provide a tuition-free education to “middle-class New Yorkers” at all public institutions. The proposed plan will allegedly apply to 940,000 people, all of whom come from families making less than $125,000 annually. “A college education is not a luxury,” Cuomo argued, “it is an absolute necessity for any chance at economic mobility.”

That much we agree with. Under the surface, however, the Excelsior Scholarship Program leaves much to be desired, and will actually apply to far fewer potential recipients than Cuomo claims. The holes in Excelsior begin with Cuomo’s characterization of potential beneficiaries — namely, the middle-class. In his article, “Cuomo’s Tuition-Free Plan Must Be More Inclusive,” Kevin Smith eloquently lays out many of the scholarship’s limitations. For public institutions where students are considered residents (in-state), the demographic that Excelsior applies to, tuition makes up less than half of student costs. Transportation, books, and room and board involve equally significant outlays; in New York City, rent likely makes up an even larger portion of total student expenses.

One of the most problematic aspects of the Excelsior Scholarship is that it applies almost exclusively to traditional full-time students at the expense of everyone else. Excelsior excludes, as Smith notes, the 84,000 CUNY students who attend part-time and work to support themselves and their families. The New York Times reports that Excelsior would not apply to 90 percent of New York’s community college students, and as many as 60 percent of those who attend its four-year colleges. Excelsior also excludes the 8,300 undocumented students presently attending SUNY and CUNY schools. If Cuomo is serious about fighting for immigrant justice in New York, let it begin with a true commitment to equal access to education.

In addition to mandating full-time attendance, Excelsior will only be available to those who graduate in four years, imposing unrealistic expectations on students to finish as soon as possible. Excelsior further requires recipients to continue residing in New York after their education for as many years as they have received the scholarship, ideally to work. For those unable to satisfy either of these requirements, all the money that Excelsior provides is retroactively converted into loans, only making those non-traditional student recipients more likely to become indebted.

As critics have rightfully pointed out, Excelsior is really just a “last dollar award,” which supports students’ tuition expenses where student aid like the Pell Grant and the Tuition Access Program leave off. This means that low-income students who already have tuition covered through these programs won’t benefit from Excelsior, and will continue to struggle to afford the numerous other expenses accrued in the process of getting a degree. The budget also mandates a tuition increase of $200 every year over a period of five years for all SUNY and CUNY schools. At current rates of enrollment, this means that a $1,000 tuition hike will raise $274 million in additional revenue at CUNY alone, given its 274,000 full-time students. At SUNY schools, the increase will raise an additional $400 million from its 400,000 undergraduates. What is peculiar, though, is that Cuomo claims Excelsior will only cost $163 million. This leads to a net revenue increase for the state, to be paid for by students who don’t qualify for Excelsior — namely, New York’s neediest students.

Although Cuomo has claimed that the Excelsior Scholarship Program is ‘bold’ and ‘ground-breaking,’ it is certainly not unprecedented. CUNY was relatively free to a vast majority of New York residents until the city’s financial crisis in 1976. This allowed generations of Southern and Eastern European immigrants in New York City to attend institutions like City College and achieve a better life. The first year that the incoming class was primarily composed of students of color, however, the tuition-free policies that once made CUNY an engine of economic mobility for generations of white students were abolished, largely due to pressure from the financial and banking community as well as the federal government. Today 85 percent of those attending New York City K-12 schools are students of color. We believe that students of color deserve the same opportunities that the city offered earlier and whiter generations of students.

We find Cuomo’s lackluster scholarship program to be both cynical and duplicitous, accompanied as it is by an overall rise in tuition costs for those who don’t apply for Excelsior. We  thus reject the Excelsior Scholarship Program and are advocating an alternative plan: to make CUNY free again for all students and lower barriers to a college education in New York for all prospective students. We believe that higher education is a public good, one that happens to be provided to people for free in countries that are far less wealthy than the United States. New York’s budget alone, the eleventh largest in the world in 2015, is more sizeable than the budgets of many countries who currently provide tuition-free public higher education to all of their citizens. The money is certainly available; what is lacking is the political will to spend it equitably.

In 2016, the city projected a budget surplus of $963 million in a budget of $78 billion, and the state reported a budget surplus of nearly $1 billion in a budget of $156 billion. We anticipate that a tuition-free CUNY alone would only cost $812 million. But how could the rest of what we are proposing be funded sustainably year after year? We are proposing that New York City issue a request to the state government for a supplemental income tax on the top one percent of earners or through normal local budgetary processes. This would tax all New Yorkers earning more than six hundred thousand annually. Instead of asking low-income students to fund the educations of the middle-class, we advocate that the very wealthy subsidize education for all. Additionally, Free CUNY is proposing a monthly stipend of no less than 25 percent of the amount required to bring each student’s household income to no less than 120 percent of the poverty line in New York City, so that students can also help pay for the costs of an education that free tuition would not cover.

The “Make CUNY Free Again Law” further seeks economic justice for adjunct faculty members. The starting salary for adjuncts in the CUNY system teaching three classes a semester is less than $19,000 a year before taxes. We see this as an untenable situation for educators at any point in their career, and are demanding pay parity between adjunct and full-time faculty. Students at the Graduate Center would benefit immensely from this proposal. Of the approximately 13,000 adjuncts that CUNY employs, a large portion are either enrolled at the Graduate Center presently or are alumni. Additionally, Graduate Center Fellowships presently only cover tuition for five years. The “Make CUNY Free Again Law” would apply to all students in the CUNY system, including removing tuition fees for Graduate Center students as well.

In sum, we recognize that any legislation that proposes lowering tuition costs for students is a step in the right direction; the Excelsior Scholarship Program, however, does not go far enough and surreptitiously deepens the existing inequalities in higher education while parading as progressive. To truly give all New Yorkers a fair shot at a good job, a good education, and a good life, we need a proposal that removes tuition entirely and addresses the economic realities of the entire student body. New York did it once before, we believe that we can do it again – let’s make CUNY free again.

Vol. 28 Spring no. 2 – 2017
One comment to “The Excelsior Scholarship Program Will Not Make CUNY Free for Most Students (And Wasn’t Designed To)”