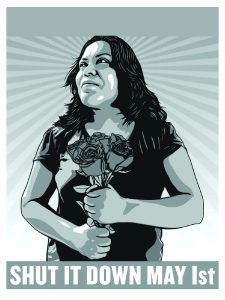 The year so far has been marked by racist and nationalist regimes, including those initiated by the Trump administration. The Muslim ban, the proposal to expand the border wall, heightened police brutality, immigrant deportations, injustice at Standing Rock, the dismantling of environmental and economic regulations, and the push to defund healthcare—all these disparate policies suggest an increasing assault on working and immigrant communities. The attacks are an extension of what the globalizing world has endured for decades: forced separation and migration; rising neoliberal cuts and war spending; increased police violence; human and economic exploitation. We’ve seen revolutions abroad and increased waves of resistance in the United States. A social movement is brewing: Where do we go from here?

CUNY serves over 500,000 students, and many of them are primarily working class and immigrant students from communities around the world. More than half come from low-income families that earn less than $30,000 a year. Many come from economically flailing or war-torn regions, fleeing to this country for survival and the need for a new life. 62 percent of CUNY faculty teach over half of CUNY courses (70,000 per academic year) and earn $3,500 for each three-credit course, making an average yearly salary of $30,000. They work as highly educated and skilled precarious labor, without adequate support for professional and research development and with little respect or recognition from their tenured-track peers. This is the army of adjunct professors teaching our next generation of youth on how to solve the problems of climate change, war, disease and disaster torn areas, religious and ethnic conflict, as well as increasing uncertainty and economic instability. This is the adjunct nation, whose administrative counterparts at CUNY command a yearly salary anywhere between $300,000 and $700,000, in addition to stipends for lavish living.

From 2000 to 2015, the number of adjunct faculty increased by 73 percent. Marc Edelman, Anthropology professor at Hunter College writes that CUNY’s “top administrators’ salaries continue to climb. The budget is balanced on the backs of faculty, workers, and students, who pay rising tuition for an education that is ever harder to deliver.” Edelman cites the $51 million shortfall last year and three percent across-the-board cuts at senior colleges, with per pupil funding 17.4 percent below 2008, inflation adjusted. For years, the New York Post has covered a number of corruption cases in the CUNY system. Baruch College athletic director and basketball coach, Machli Joseph, was found stealing more than $500,000 from the school. Former City College President Lisa Coico resigned last year after being found guilty for stealing research-foundation funds for personal use. Kingsborough faces a federal discrimination lawsuit for accusations of racial slurs towards the Jewish community, with questions being raised about the misuse of campus grant funds and rental fees. City Tech was similarly accused of racial discrimination and the misuse of administrative funds. Two top CUNY officials left their posts after a November investigation by the State Inspector General for “waste, fraud and abuse and any unethical or illegal activities.” Frederick Schaffer, CUNY’s general counsel, announced his retirement after the investigation went public. Jay Hershenson, the vice chancellor of university relations and the secretary to the board of trustees, stepped down from his post to assume a new role at Queens College. The list goes on.

Meanwhile, the Professional Staff Congress’ New “Progressive” Caucus, who’ve enjoyed union leadership power since 1995, failed miserably at a six-year long contract battle, negotiating a poor annual contract, even after 92 percent of members voted to strike. With union elections taking place at several campuses this month, the New Caucus is likely to return to power, but with hope for representation from a movement seeking a more genuine grass roots and militant approach to labor organizing.

For the past two years CUNY Struggle (CS) has been organizing a more militant and democratic union that is run by its members, with adjunct issues central to its organizing. On 5 April, the eve of the GC chapter elections, the CS Caucus slate successfully debated the Graduate Center’s New Caucus slate, also known as the New Caucus and Fusion Independents (NCFI). CS presented its resolution for open bargaining sessions, which is to be proposed at the PSC May Delegate Assembly. The resolution would make bargaining sessions open to any PSC member, with frequent, detailed reports after every session. It would also ensure proportional representation for all work titles on the bargaining team. For example, if adjuncts make up 55 percent of union membership, then 55 percent of the bargaining team will be adjuncts. At the debate, both slates urged for the immediate need to engage members around the upcoming Supreme Court Janus v. AFSCME case, a right to work ruling, which might eliminate agency fees and allow individuals to benefit from collective bargaining without contributing to the union. Both slates pressed for the immediate need to organize around a new contract, one that would include a remuneration of  7000 per course for adjuncts. Members of the audience and the CS slate pushed NCFI to justify their alliance with the New Caucus, which has consistently failed to act on behalf of adjuncts and is disconnected from its vast worker base.

Despite their differences, both slates, along with long-time adjunct organizers, successfully created the Committee for Adjuncts and Part Timers (CAP) in February. CAP evolved from “First Fridays,” a PSC committee that advocated for adjuncts within PSC’s governing body for over twenty years. The newly formed CAP continues this adjunct advocacy with an emphasis on connecting adjuncts and part-time workers across the CUNY system. The goal is to create adjunct committees on each CUNY campus in order to expand adjunct membership and representation in the PSC leadership and the bargaining team. Additionally, it seeks to initiate a CUNY-wide campaign for improved job security, pay parity, and working conditions. In conjunction with members from both CUNY Struggle and the New Caucus and Fusion Independents, CAP has successfully worked with new and existing adjunct committees at Lehman, La Guardia, Hunter, Baruch, Bronx Community College, School for Professional Studies, and Medgar Evers.

Both slates criticized the 2017 New York State Budget and Governor Cuomo’s Excelsior Scholarship, which would keep state funding for CUNY senior colleges essentially flat. With no renewal for Maintenance of Effort to cover rising operating costs, the majority of new funds for CUNY will come from tuition increases over the next five years, which will be paid by the students who do not qualify for the Excelsior Scholarship. Additionally, undocumented students will remain excluded from financial aid.

The immigration bans, raids and deportations under the Trump administration have also spurred many people across CUNY into organizing the CUNY as Sanctuary campaign. With the help of CUNY CLEAR (Creating Law Enforcement Accountability and Responsibility), CUNY Citizenship Now and the PSC, students and faculty across CUNY campuses have organized “Know Your Rights” workshops and discussions on how to address ICE raids, student data concerns and police presence on campuses. The ACLU, the NYCLU, and CUNY CLEAR filed Raza v. City of New York in June 2013, challenging the New York City Police Department for discriminatory and unjustified surveillance of CUNY Muslim students. The proposed settlement establishes reforms to protect Muslims and others from discriminatory and unjustified surveillance by NYPD. Students and faculty from various groups including Students Without Borders and CUNY Resists Trump, continue to seek cross-campus coalition building towards protecting CUNY students from future attacks and making CUNY a Sanctuary campus.

A Day Without Immigrants

The increase in immigrant raids and forced deportations led SEIU United Service Workers and numerous immigrant organizations, including Movimiento Cosecha, to call for “A Day Without Immigrants,” in commemoration of this year’s May Day. Coalitions across the country call on all workers, particularly immigrants, to strike and reveal the nation’s fundamental dependence on immigrant labor, especially undocumented labor. Maria Fernanda Cabello, spokesperson from Movimiento Cosecha, says the 400,000 committed strikers on May Day demand “permanent protection from deportation for the eleven million undocumented immigrants, the right to travel freely to visit our loved ones abroad, and the right to be treated with dignity and respect.”

In solidarity with immigrant activists, students and faculty, including Nancy Fraser, David Harvey, Judith Butler, Cornell West, Etienne Balibar and others, call for a May Day moratorium on all normal university operations across the United States. The pledge calls for teach-ins, demonstrations, marches and protests in lieu of regular coursework: “We call on university administrators and faculty to cancel classes, close offices, and postpone maintenance to demonstrate our solidarity with immigrant workers and our support for thoughtful strategies of resistance.” While the PSC encourages its members to participate by including May Day in-class discussions, it has not yet endorsed the nation-wide moratorium to cancel classes and shut down university operations.

Building on the momentum of the Women’s March on Washington, women around the world called for an International Women’s Strike or “A Day Without a Woman,” on 8 March, International Women’s Day. Women around the world called off work and refused to engage in domestic labor. Prominent feminists such as Angela Davis, Keeanga-Yamahtta Taylor, Rasmea Yousef Odeh and Linda Martín Alcoff joined the strike. With inspiration from Argentine feminist coalition, Ni Una Menos, they work towards a feminism for the 99 percent—a feminism that is anti-capitalist and denounces violence against women through debt, discriminatory state policies, mass incarceration, abortion bans, and the lack of access to free healthcare.

Because of the hundreds of teachers and employees who refused to work, districts of Prince George’s County, Maryland; Alexandria, Virginia; and Chapel Hill, North Carolina, cancelled classes on 8 March. In Providence, Rhode Island, the municipal court closed because of a lack of staff. In Washington, D.C., over twenty Democratic female representatives walked out of the Capitol. Urban Education PhD students successfully petitioned their department to close all operations as part of the Women’s Strike. They held a rally in front of the Graduate Center, with faculty and students sharing poetry, testaments and demands for reclaiming women and workers’ rights. Tatiana Cozzarelli, Urban Education PhD student and one of the main organizers, spoke on the importance of refusing our labor as leverage for power. The key question, she says, is: “How do working-class women who make up the movement organize a strike in their workplace?”

Inspired by the May Day Moratorium and Urban Education’s successful closure for the International Women’s Strike, Graduate Center organizers met with students from the New School, NYU and Barnard to call on faculty, staff and students for a city-wide walk out on May Day. Since the Haymarket affair in Chicago in 1886, May Day has been a day for working-class protest and workplace actions. The 2006 “Day Without an Immigrant” protests successfully pushed back Bush-era assaults on immigrant workers. This year’s May Day and “A Day Without an Immigrants” similarly seek to mobilize thousands and garner strength towards building a movement of worker resistance. With movements and organizations as diverse as CUNY Struggle, GC Democratic Socialists of America, FREE CUNY, the Adjunct Project, CUNY Rising, the Doctoral Student Council, the First 100 Days, the New Caucus and Fusion Independents, CUNY Sanctuary and GC Resist Trump, CUNY activism is on the rise, especially at the Graduate Center. Students, faculty and staff are engaging with the question: Where do we go from here? It is pertinent now more than ever to ask: How do we come together to strengthen our efforts across organizations and campuses? The hope for May Day is to bring together our organizing efforts and demonstrate the power of workers refusing their labor and uniting for emancipation. As Assata Shakur, a City College alumnus, urges us: “It is our duty to fight for freedom. It is our duty to win. We must love and support each other. We have nothing to lose but our chains.” We must consider why, whom, and what we fight for, how our efforts connect with struggles around the world, and the strength and courage needed to see the ideological chains that divide us.