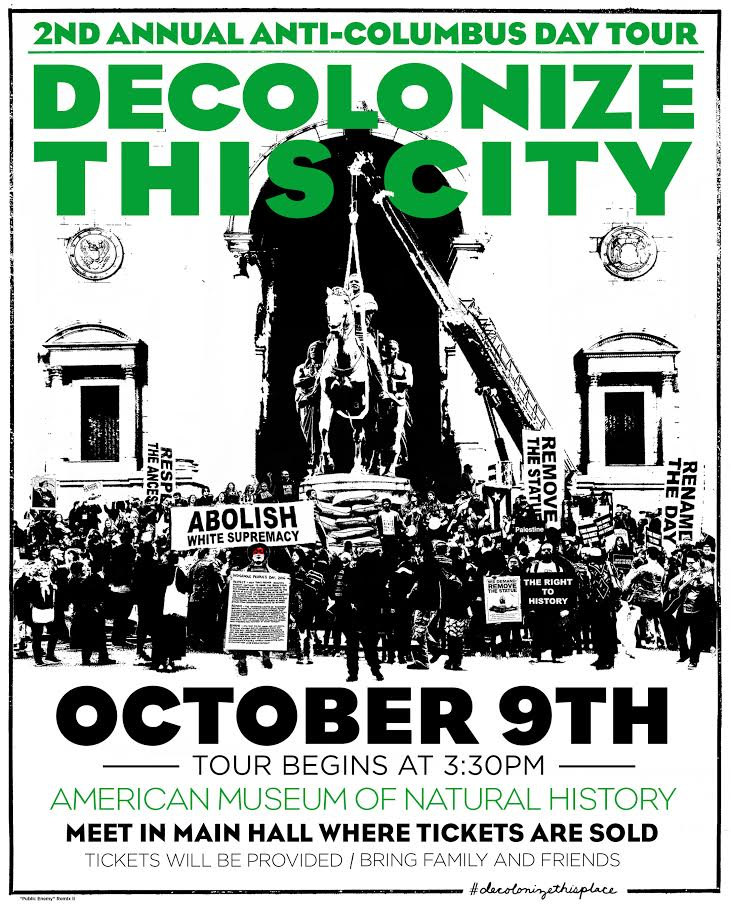 The 2nd Annual Anti-Columbus Day Tour is scheduled for October 9th at the American Museum of Natural History. This event is an unsanctioned, decolonizing action open to the public with tickets being provided by the organizers, including NYC Stands with Standing Rock, Decolonize This Place, Black Youth Project 100, Eagle and Condor Community Center, South Asian Solidarity Initiative, and NYC Students for Justice in Palestine.

To: Mayor de Blasio, New York City Council, and the Trustees of the American Museum of Natural History

Many U.S. cities have chosen to do what is just and renamed Columbus Day as Indigenous Peoples’ Day. Why is New York not among them? There is no reason for holding out any longer. It’s time for the Mayor and City Council to stand on the right side of history. New York City sits on the territory of the Lenape, and over one hundred thousand Indigenous people live on this territory today– more than any other city in the United States! Let’s honor the rich legacy and achievements of Native Americans and discard the unsavory celebration of imperial conquest. This public holiday must be relaunched as an occasion to dignify our Indigenous brothers and sisters, it should no longer commemorate a figure widely associated with exploitation and enslavement.

The equestrian statue of Theodore Roosevelt on Central Park West outside the American Museum of Natural History has often been cited as the most hated monument in New York City. It’s easy to see why. Flanked by figures that appear to be Native and African stereotypes and are in a posture of subservience, the statue is a stark embodiment of the white patrician supremacy that Roosevelt himself espoused and promoted, and it is an affront to all who enter the museum. Statuary is not forever, and a monument that appears to glorify racial and gender hierarchies should be retired from public view. The movement that began in the South with the removal of Confederate flags and generals from public display has come to New York. The statue is city-owned, and it sits on Parks Department land. The Mayor’s commission to review “symbols of hate” should prioritize its removal, and City Council members should all agree–it’s time to take it down.

Why are Indigenous, Asian, Latin American, and African cultural artifacts still in the American Museum of Natural History, while their Greek and Roman counterparts are housed in the Metropolitan Museum of Art across the park? Because New York’s premier scientific museum continues to honor the racist classification that assigned colonized peoples to the domain of Nature and the colonizers to the realm of Culture. It’s time to accept that The Hall of African Peoples does not belong in the same exhibition framework as The Akeley Hall of African Mammals, and that Indigenous or Asian cultures cannot be represented in ways that are akin to the display of fossils and meteorites. These arrangements should be reviewed by a Decolonization Commission and reconceived by representatives of the “exhibited” populations. Human remains, sacred things, and objects of power stolen from Indigenous peoples should be placed under the authority of the descendants. The museum, which receives $17m of public cultural funding annually (a sum greater than that allotted to the entire borough of Queens), has long been an embarrassment to New Yorkers and out of towners. It needs a serious renovation, to be undertaken by a diverse range of curators drawn from the populations featured in the museum.