In a capitalist society, we are all working to create living conditions that support positive socio-economic growth. Issues such as police brutality, equal opportunity employment, and sustainable living conditions continue to challenge what many of us consider important elements in achieving the “American Dream.” For many of us in the academic world, sports amount to entertainment or a simple break from our daily grind. To many others, however, sports represent an escape from the ups and downs that life continues to present. The spirit displayed in social settings when the Yankees hit a home run, or the Knicks complete a fast break, can be contagious and irresistible. Unfortunately, some of our favorite teams continue to exploit the athletes that work for them. The recent issues that the National Football League (NFL) seems to be encountering is a wake-up call for many of us who are committed to raising our voices for justice.

Whether you’re a sports fan or not, it’s no longer acceptable to support lack luster attempts to achieve equality in professional sports. It’s certainly true that the world I come from would benefit greatly from kids striving to excel in pedagogy — rather than striving to be the next hero to catch a touchdown pass in Super Bowl LI — but if the kids in my neighborhood naturally gravitate to sports, it remains our obligation create a level playing field for the future. The NFL continues to benefit from the blood, sweat, and tears of many young athletes from urban communities. The time has come for them to take responsibility for the role that they play in our communities. Until we begin to hold them accountable, ethically and socially, we run the risk of positioning these young people for failure, not just in sports, but also in life.

Growing up as a Dallas Cowboys fan, I could never have imagined that one day I would disassociate myself from a league that once represented hard work, diligence, and excellence. With last year’s Super Bowl demanding $5.5 million for a thirty second ad, we know that this sport is generating serious currency. In the mist of all this revenue generation, minorities still lack head coach representation. The policies, although necessary, have become inconsistent, sending mixed messages to fans and organizations. Not to mention the lack of support many of these athletes experience once they retire and suffer from serious health afflictions such as dementia.

These issues weigh heavy as you take a look at the future of this sport. Especially when we put the spotlight on young athletes from urban communities, striving to become one of the 32 individuals drafted in the first round of the NFL draft. Don’t get me wrong, if someone offered me $30,400,000 with a $20,500,000 signing bonus at the age of 23 to play sports, I would probably say, “Where do I sign?”  But when we take a look at the career of, let’s say Colin Kaepernick, who signed a deal worth $5,124,296 as a rookie in 2011, it’s clear that some of what the league is selling is an illusion. 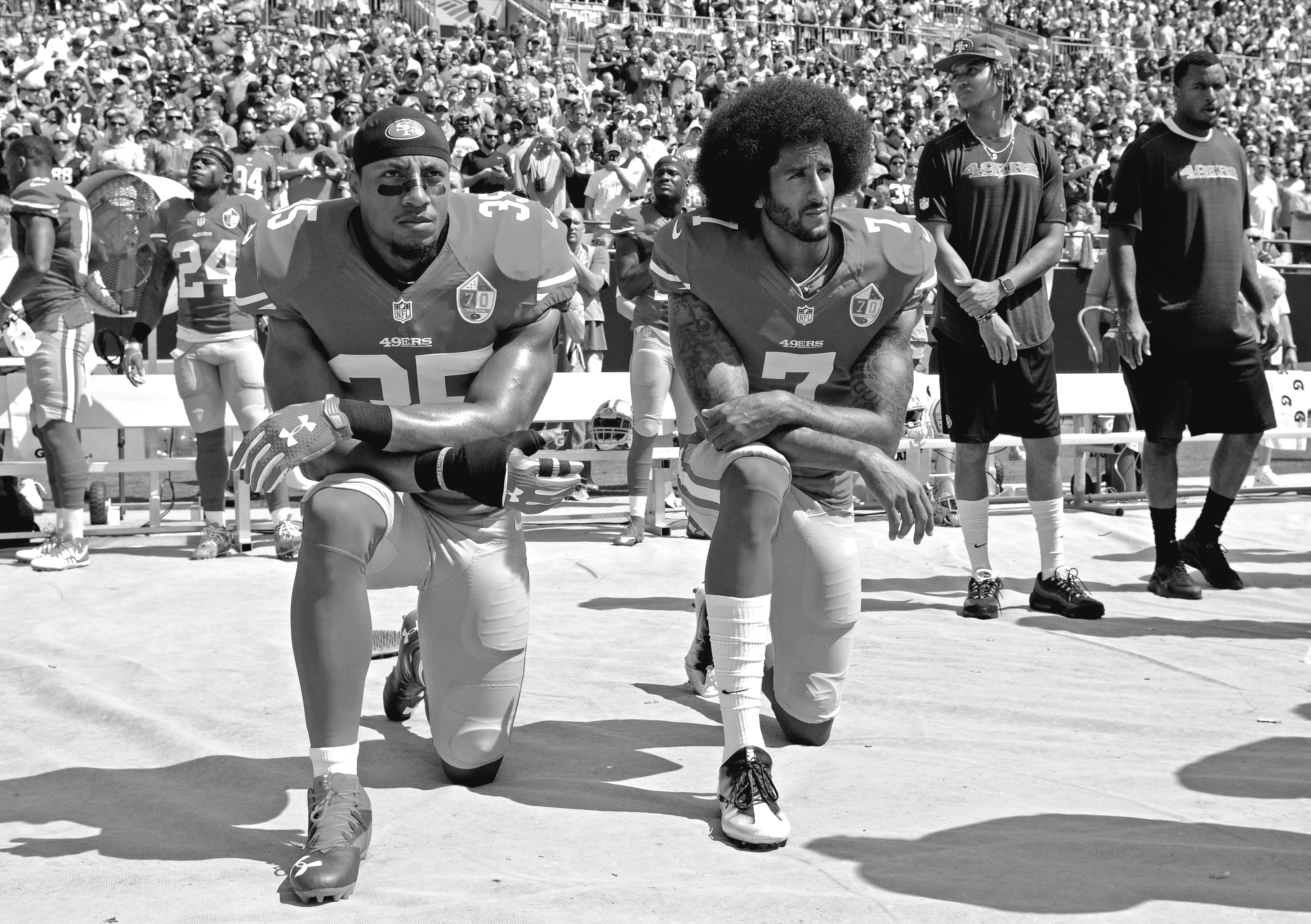 San Francisco 49ers’ Colin Kaepernick (7) and Eric Reid (35) kneel during the national anthem before an NFL football game against the Carolina Panthers in Charlotte, on Sunday, Sept. 18.(AP Photo/Mike McCarn)

Kaepernick decided to take a knee during the national anthem because he was fed up with injustice in our communities. This 29-year-old quarterback opted out of his contract with the San Francisco 49ers in March. He threw for 2,241 yards and 16 touchdowns in 12 games last season, which places him in good standing among NFL starting quarterbacks. That being said, he is still a reliable asset to many teams in the NFL. It seems that as he took a stand for equality and justice, he lost marketability in the NFL. What does that say about this league? Is fame and glory contingent on turning your back on the issues in our urban communities? Will Colin’s decision to raise his voice leave him ostracized? I’m challenging our community to address this scenario with urgency. Urban communities provide this league with athletes who have become icons in urban culture. If we continue to allow this nonsense to persist, we lend our support to a deteriorating system that is detrimental to the growth of our communities and indirectly destroy lives.

Studies indicate that sports have a positive effect on our economy, increase employment rates, promote community pride, and enhance overall health. As of 2012, 177,559 scholarships were distributed in the United States to youth who showed the ability to perform at a collegiate level. In 2015, college athletics generated $9.15 billion in revenue.

With that being said, it looks like it will take a lot more than a protest to stop what many of our young athletes consider their ticket to a better way of life. Playing sports as a young person helped me to make friends, took me away from the television, and inspired me to reach beyond the status quo to achieve success. As an adult, I still have a positive bond with many of the guys that I played with and against in middle school and high school. It would be preposterous to say that I didn’t learn the power of teamwork as I participated with my teammates. But after high school, my sports career was over, and it’s safe to say that many of the guys I played with experienced the same reality. Kaepernick was one of the few who found a way to establish a career in professional sports. He should never have been denied his opportunity to play when all he did was take a stand for justice and equality.

Colin Kaepernick embodies a great example of how athletes should embrace their communities. Kaepernick hosts Camp Taylor, a community based organization that focuses on helping children suffering from heart disease. He has donated over a million dollars to various charitable organizations. Earlier this year, this NFL quarterback delivered several boxes of outfits to New York parole through the “100 Suits for 100 Men” campaign, an organization that focuses on assisting men and women who are on parole looking for employment. Recently, Kaepernick pledged $25,000 in aid to Deferred Action for Childhood Arrivals program (DACA). It’s safe to say that this athlete is using his voice and finances to address the issues that continue to plague our urban communities. Instead of questioning his motives for taking a knee during the national anthem, the NFL should be celebrating his work off the field. 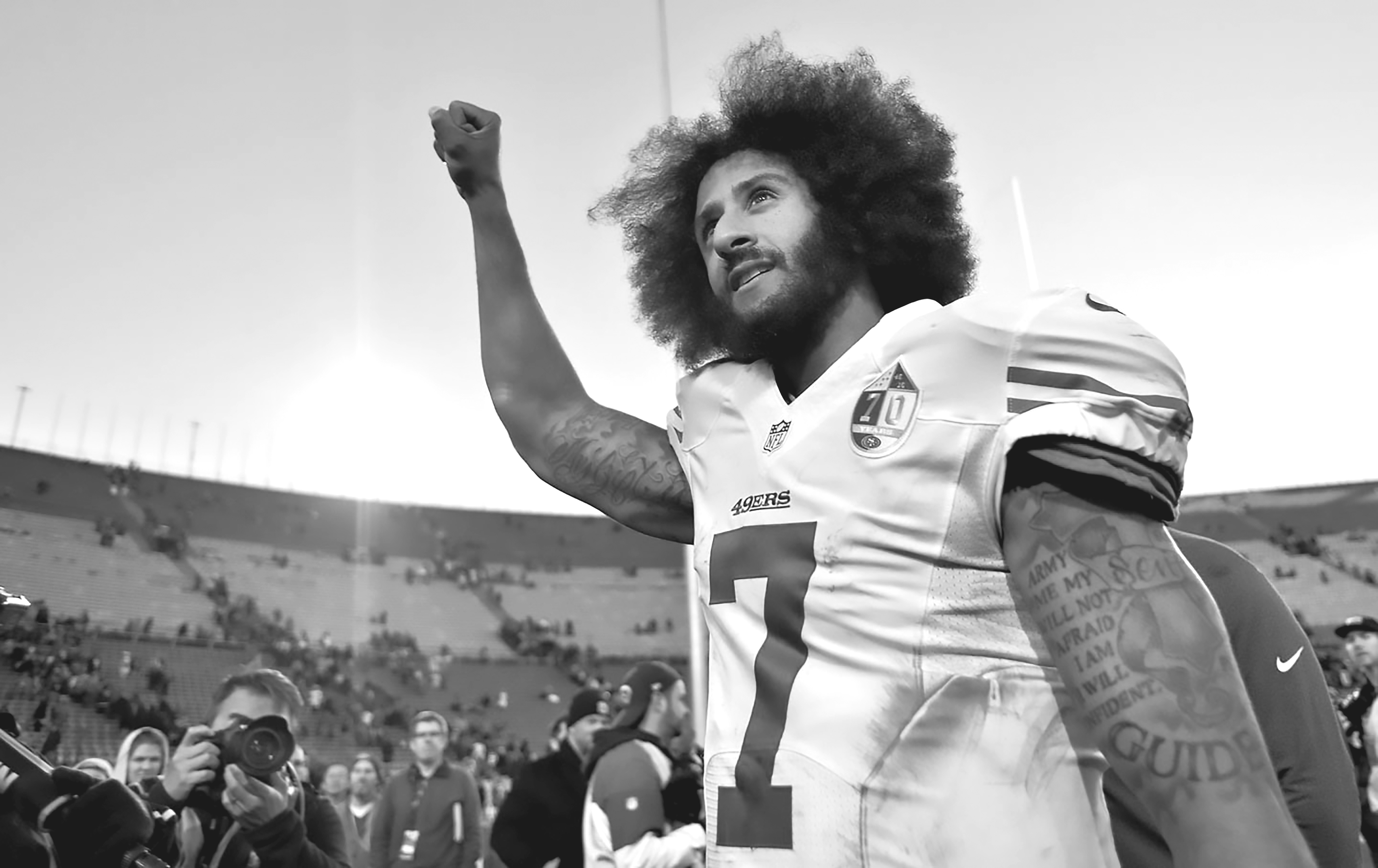 I believe that our urban communities should, with the right pedagogical tools, take the lead to share this information with our young athletes. Let’s encourage our young people to reach for the sky through work in the community as well as work on the field. Colin Kaepernick is one of the many athletes who has fallen out of grace with the NFL, and he deserves to express his frustration with a system that continues to reward silence. It’s essential that urban communities and pedagogy take the lead, as we initiate constructive ways to educate young athletes about the importance of justice and equality. We have to reiterate the fact that running and passing the ball well is only half the battle. The truth lies in what community you coexist in, this is where you harvest your soul, and what gives you the potential to shine with or without the NFL.

As hundreds of people gathered in front of the NFL headquarters on Park Avenue last month, the frustration of the community became apparent. Community leaders, organizers, and clergy spoke to the hundreds that gathered in protest of the NFL’s treatment of Kapernick, and it was evident that many fans shared my anger. Tameka Mallory of The Justice League proclaimed to the crowd, “This is bigger than one individual!” I agree with Ms. Mallory, we have to begin to think about the long-term implications this will have on our culture.

How do we explain this situation to aspiring professional athletes? What role do we play as activists and supporters of equality? Is this a sign that we should be preparing for more discrimination as we build for the future? These questions must be answered immediately; these answers will provide direction for the future of college athletes from urban communities. As the speakers addressed the crowd, it became obvious that many believe that our first step should be to boycott the NFL. That means not watching the games, not wearing or buying their apparel, and most importantly, continuing to rally and express our concerns about the treatment of athletes from urban communities. The voice that we have as one-time supporters of the league should be very important to the league. They will have to reexamine what just happened to Kaepernick, and how they should be working to avoid another situation of this magnitude.

This situation comes down to an individual’s right to express how he/she feels about life as a minority in America. Police killed over a thousand black people in 2016; Kaepernick has every right to express his displeasure with what is going on in our country. To end his career over this would be insane. This should be a sign to our urban communities and its gatekeepers. It seems that no matter how much our athletes generate for organizations, when they become socially invested in issues that relate to our communities, they run the risk of being barred from the team. I urge you all to care and to take a stand. Do what is right in your heart. Let the NFL know that it’s unethical to treat players in this manner. We are all invested in our communities; the fact that athletes have become a big part of American culture is real. We must educate and embrace them by letting them know that we got their back. Not because they are great at sports, but because they are a part of our communities. Ultimately, if we stand for equality in the NFL, we take a stand for the systemic issues that continue to infect our communities. The time is now, let’s work together; let’s create the solution.