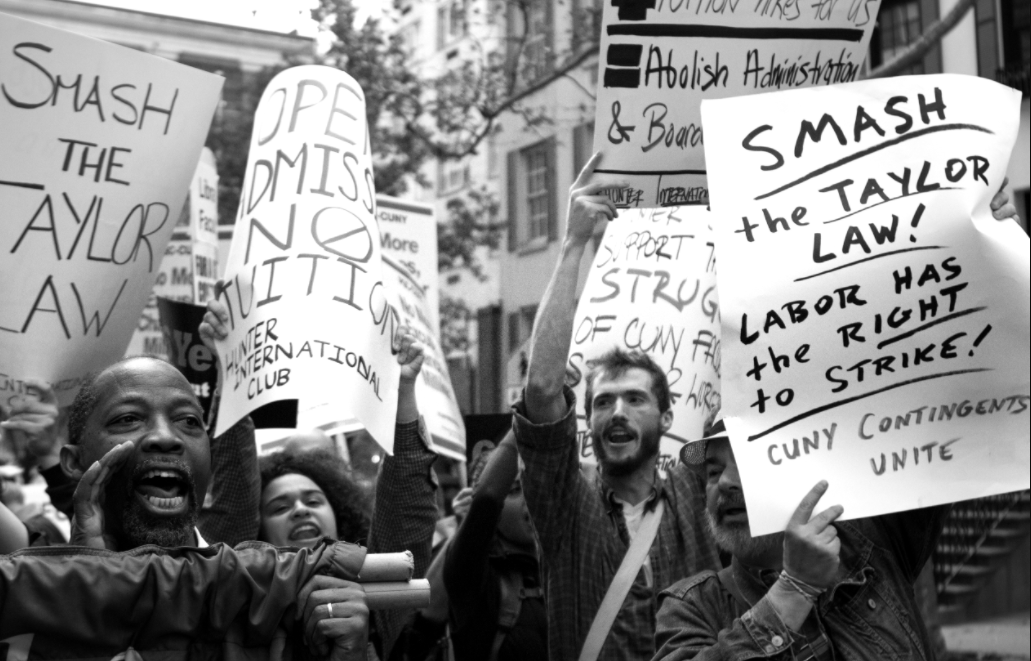 Whenever we get students and workers together to brainstorm a way out of the mess that CUNY is in, soon enough we face the facts that something more than patient negotiating at the bargaining table is needed, that lobbying Democrats is a glaringly obvious dead end, and that only disruption and direct action can move the needle on forty years of austerity destroying the school we love. In other words, CUNY needs to go on strike. At this moment, on cue, a loyal PSC comrade invariably rejoins: “But that’s against the law.” With that, the Taylor Law, the eternal alibi of business unionism in the CUNY system, has served its purpose once more.

The Taylor Law was enacted in 1967 as the final act of the legal recognition of New York City unions, begun a decade prior. Under the Taylor Law, City unions gained an unambiguous right to claim representation of city workers and collect their dues, and these representatives of the city’s unions got an incontestable seat at the bargaining table. The tradeoff was that these legally recognized unions cannot legally go on strike. Strikes by public sector workers have been either de jure or de facto prohibited throughout New York City’s history, so this wasn’t anything particularly novel. What changed was suddenly there was an institutionalized labor bureaucracy, guaranteed a steady stream of employee dues, a staff of paid functionaries, access to the halls of power, and the conceit of imagining themselves as labor dignitaries, giving grandiose speeches, working the conference circuit touting their achievements, and issuing self-aggrandizing newsletters celebrating themselves and their small clique of friends, as they became evermore cemented as the left wing of management. And this class of union bureaucrat suddenly had a lot to lose if workers struck. Accordingly, the legally codified power of New York City’s unions, gained through the bold and daring strikes of workers in sanitation, transit, and the city’s public schools, is now contingent on the ability of its leadership to prevent strikes. So when somebody tells you we can’t go on strike because its against the law, what they mean is it would challenge the union’s financial infrastructure and the cozy arrangement our leadership has with the city. A strike would place us in an actual confrontation with the forces of austerity, not the performance of confrontation we currently have, with its empty rhetorical grandstanding and symbolic, stage-managed arrests. This means the PSC would have to take some of its social justice magnetic poetry like “fighting against the logic of the neoliberal regime” and actually live by it. But that would require a profound break from business as usual.

As it happens, this past week, two profoundly unusual things occurred.

First, an actual flesh and blood PSC staffer contacted many adjuncts directly to discuss their stake in the union. Had President Bowen been visited by three spirits who’d shown her the error of  autocratically administered business unionism? Alas, this was not the case. The US Supreme Court is currently hearing arguments over Janus v. AFSCME, sure to be decided in favor of the plaintiff, which will result in public employee unions losing their right to claim dues automatically from public employees who do not wish to sign a union card. Effectively, unions like the PSC can no longer force people to give up their dues money when they don’t think the union deserves it. Therefore staffers were contacting members under the auspices of a discussion, but simply to deliver carefully crafted talking points, the entire purpose of which was for members to sign a special card diminishing the time they can quit paying dues to a ten-day window each year. In an organization that actually commanded the respect of its membership, engaged in robust democratic participation, and empowered the rank-and-file to take control of their workplace with the union at their back, Janus would not be much of a threat, and the very idea of a such a bizarre and binding loyalty oath would be ridiculous. Maybe a few reactionaries would leave for ideological reasons, or those with a more pressing need for their dues money, but unless we think our colleagues are a bunch of selfish dolts (and if so, why organize at all?), we can assume a critical mass would remain in a union if they thought it worth their money. (And this is to say nothing of what exactly a ‘union’ needs money for when it has given up the right to collect a strike fund!) But to a union like the PSC that relies on top-down leadership of a demobilized rank-and-file, and instead begs politicians for table scraps in vain, Janus is an unmitigated disaster, akin to a giant asteroid approaching Earth. 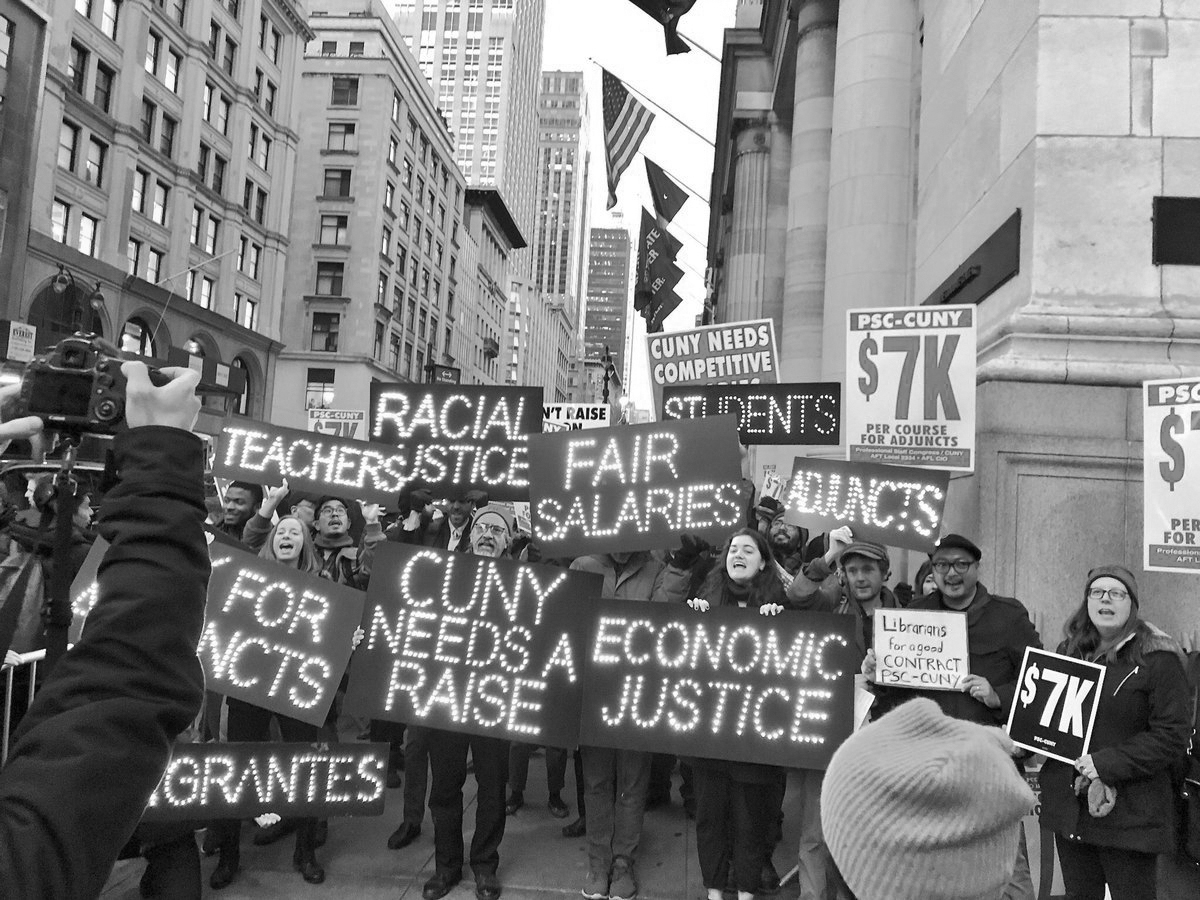 Second, teachers in West Virginia, a ‘right to work’ state where collective bargaining is not recognized and striking is illegal, conducted what even the bourgeois press called a ‘crowd-sourced strike.’ Outside of the formal structure of the AFT, the parent union of the PSC, and against its explicit wishes to stop, they organized a statewide walkout unprecedented in recent decades. Spurning an insulting 1% wage increase, which similar to the last PSC contract didn’t keep pace with inflation, these brave teachers didn’t waste their time lobbying politicians from a position of powerlessness. They built a campaign of direct action that relied on a broad base of community support and collective risk-taking in defiance of the law and their own union leadership, which was soon chasing after the independent initiative of its rank-and-file. The WV teachers didn’t just demand raises for themselves, either. In contrast to unions like the PSC refusing to even consider bargaining demands outside its own narrowly defined contract (including the pressing need to unify with students demanding free tuition), the WV teachers stood in solidarity with other public sector workers, demanding wage increases in other sectors, too. And they didn’t let the illegality of their strike stop them; instead they donned red to invoke the Battle of Blair Mountain, West Virginia’s most militant labor confrontation, an armed confrontation in which 10,000 miners exchanged fire with the police for five days, with a million rounds of ammunition spent! Surely the New Caucus would have referred the agitators who initiated this strike to the PSC’s pantheon of labor scholars and socialist public intellectuals, who would have didactically explained the futility of taking any action beyond lobbying the Democratic Party, because in real life the  rank-and-file just isn’t ready for the kind of militant direct action that labor intellectuals write their books about. Thankfully the vanguard of New York City labor intellectualism, sticking to its natural habitat of swanky DUMBO loft parties, was absent in provincial West Virginia, and as of writing, their example is resounding across the country, with similar actions planned in Arizona and Oklahoma.

Janus v. AFSCME is the latest phase of a decades-long ruling class offensive against any vestiges of worker power or dignity, waged by the bitter enemies of working people, who must be defeated by any means necessary. But this despicable campaign has been abetted by union bureaucracies, which seek only to preserve their own power and prestige while managing the inevitable decline of legalistic US unionism into oblivion. In unions like the PSC leadership spends more time monitoring and containing challenges from the left than it does going on the offensive against the right, even while their disastrous pact with the Democratic Party and its affiliates continues to prove fruitless and a failure beyond redemption. The result has been a class struggle in which only one side is fighting. And now our enemies are poised to strike a death blow, but this will not be the end. When people struggle in concert they produce organizational forms, which soon ossify and become fetters to to the struggle’s unfolding, as we see when our comrades cower before the Taylor Law. It’s time to cross the threshold and leave the dead weight of the past behind. We do not rejoice in the further weakening of a union apparatus so degraded and powerless that it must delude itself with self-aggrandizing bombast while begging politicians for scraps from a position of utter powerlessness. But their disaster need not be ours. If Janus is a giant asteroid, we are not afraid, for we are not dinosaurs.