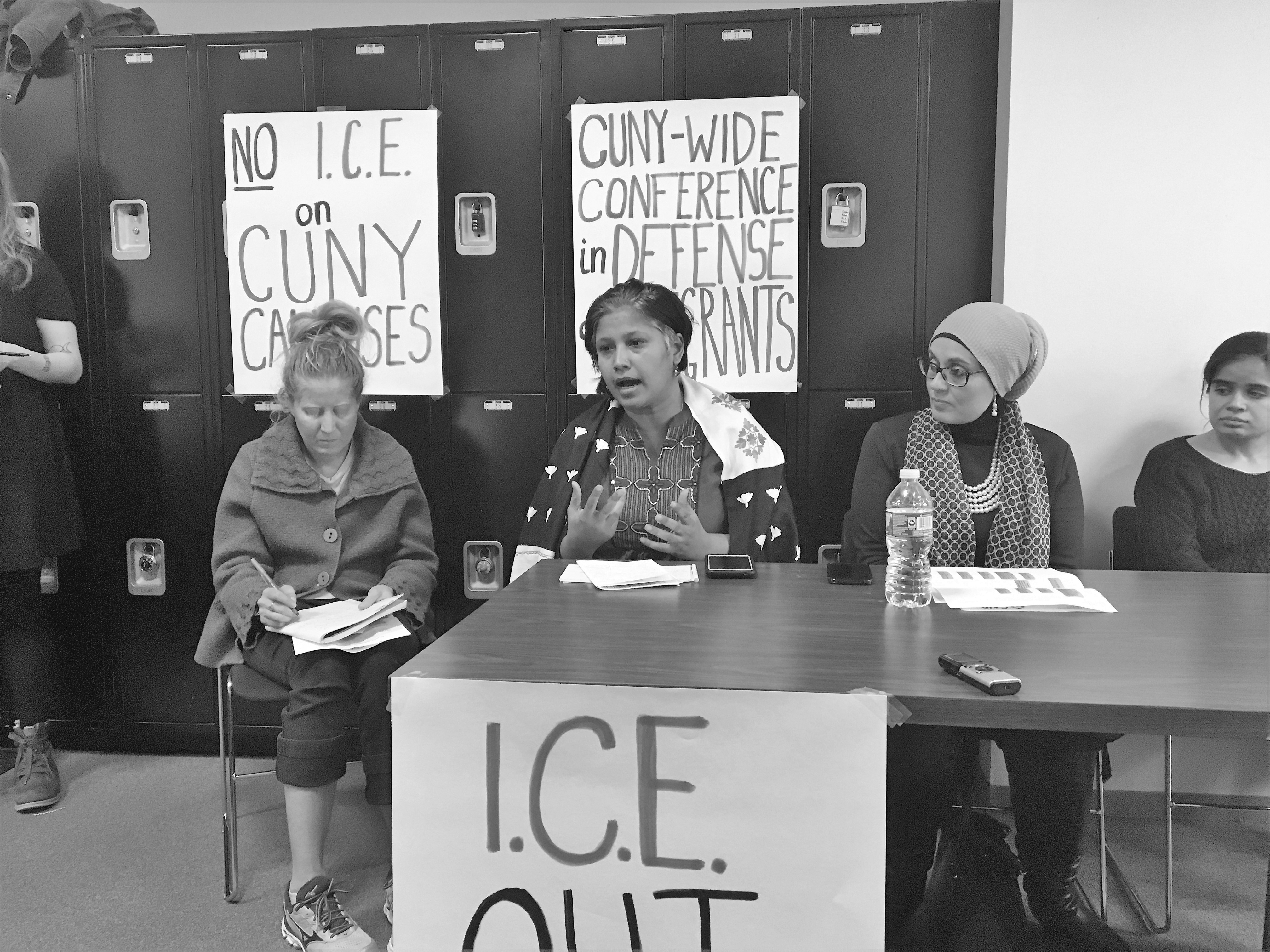 On 3 March, eighty CUNY students, faculty and staff members, came together with immigrant rights activists and labor organizers for a conference in defense of immigrants. Attendees participated in intensive discussion and organizing, and the conference included a panel aimed at creating the framework for a university-wide rapid response network against the threat of deportations.

The conference opened with reports on two recent cases of repression against immigrants. The first exemplifies the urgency of the conference: the detainment of Aboubacar Dembele, a prospective Bronx Community College student who was detained by Immigration and Customs Enforcement (ICE) agents on 8 February. Dembele’s attorney, Monica Dula of the Legal Aid Society, told the conference that plainclothes ICE police told Dembele, who has been in the U.S. since the age of three, they were detaining him because his DACA renewal was rejected after the program was rescinded by Trump. Conference participants made plans to attend Dembele’s bond hearing as well as his court appearance on 15 April 15. The second case was that of Juan Esteban Barreto, who was recently detained by the ICE in collusion with the NYPD.

Greetings from activists at Latin America’s largest public university were read to the conference in Spanish and in English translation. The message, from the Internationalist Committee at the National University of Mexico (UNAM), connected the defense of immigrants on both sides of the border to the fight against capitalist repression, as in the case of the 43 “disappeared” students from the Ayotzinapa rural teachers’ college. (Editor’s note: the full message has been reprinted in this issue of the Advocate)

The first conference panel was entitled “DACA and TPS: Where Do We Go From Here?” Among the speakers were Janet Calvo and Matías Gonzélez, respectively a professor and student at CUNY Law. Their presentations provided detailed information on the present legal situation of Deferred Action for Childhood Arrivals (DACA) as well as legal cases in a number of states related to DACA. Kaitlan Russell of the Hunter College Committee to Defend Immigrants and Muslims spoke on DACA as well as the revocation of Temporary Protected Status for Haitians and Salvadorans. She warned against any kind of reliance on the Democrats, who, under Obama, deported a record number of immigrants and under de Blasio have permitted collusion between the NYPD and ICE. 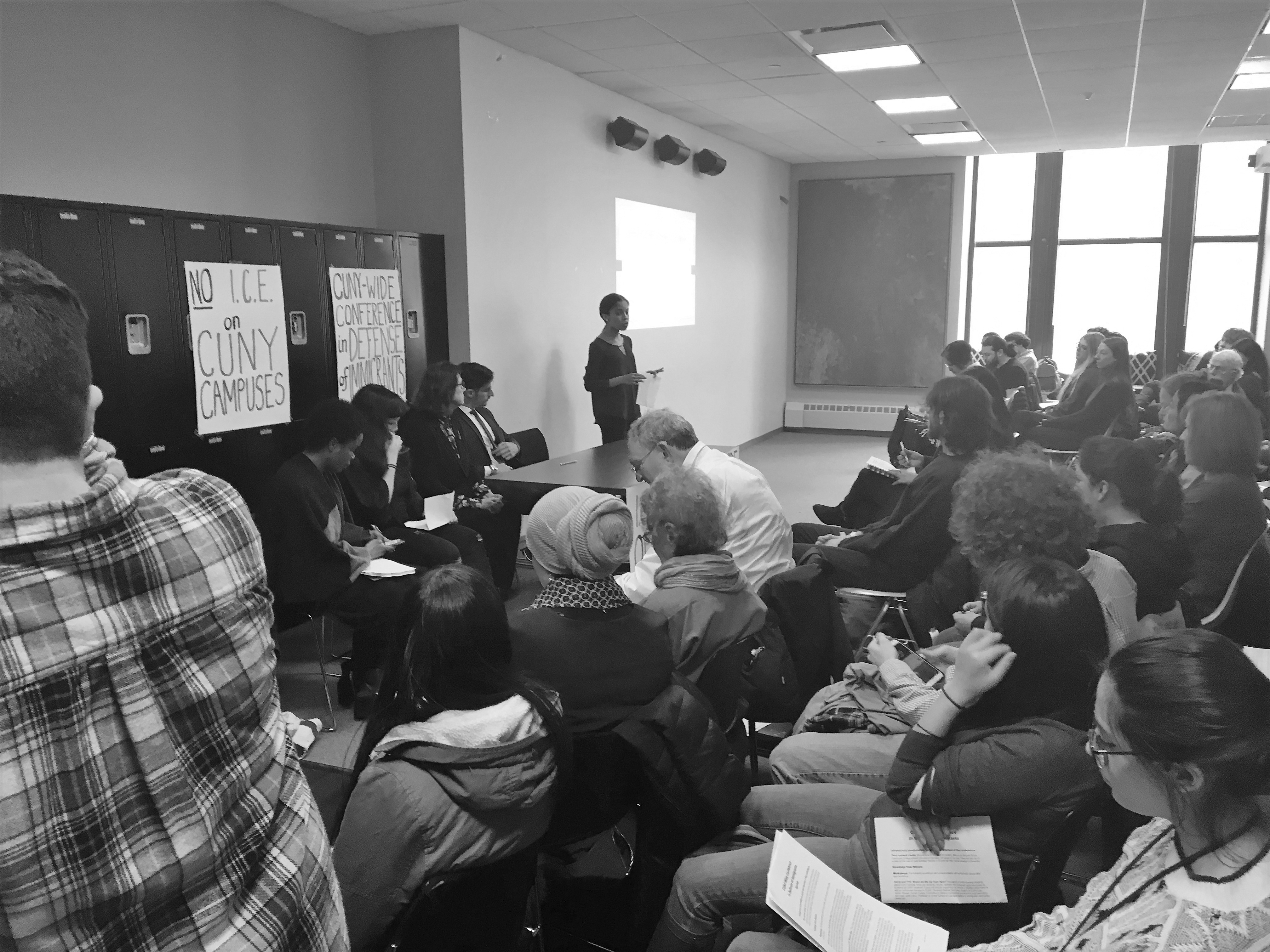 The next panel was “Opposing Islamophobia and the ‘Muslim Ban.’” It featured Naz Ahmad, staff attorney from CUNY CLEAR, Debbie Almontaser of the College of Staten Island and Muslim Community Network, and Chaumtoli Huq of Borough of Manhattan Community College and Law@theMargins. Speakers traced the three versions of the Trump “Muslim bans,” noting that these built on a history of anti-Muslim measures long predating the current administration. Panelists also spoke on the revelations of NYPD’s spying on Muslin students at several CUNY campuses, as well as other topics. Speakers from the floor noted that when CUNY student Saira Raifee was stranded by the ban in February 2017, protests by students and unionists highlighted her case, helping facilitate her return; and also underlined the significant presence of workers from a number of majority-Muslim countries in several sectors of the NYC working class.

The third panel was “Immigrant Workers’ Struggles: Lessons For And At CUNY.” It featured Mahoma López of the Laundry Workers Center, and well as three activists from Trabajadores Internacionales Clasistas (Class Struggle International Workers). The panelists spoke powerfully about their experiences in the restaurant, garment, taxi and domestic-worker sectors, and their activity in organizing campaigns at the Hot and Crusty bakery, B&H Photo, Liberato Restaurant, and in Ayotzinapa solidarity. Particular emphasis was given to connecting immigrant rights struggles to a working-class strategy for uprooting women’s oppression, which, as one of the TIC speakers stressed, “falls with triple force on immigrant working women.” During the discussion, conference participants emphasized the need for CUNY activists to “break with ivory-tower approaches” and connect up with the living struggles of the multinational, largely immigrant working class that makes NYC run.

The final panel was called “Building a CUNY-Wide Network.” Marjorie Stamberg, public school teacher, United Federation of Teachers delegate and member of Class Struggle Education Workers, talked about the determination of NYC teachers to stand up against any threats by the immigration police against their students or the students’ family members. Maeve Campbell, a CUNY Internationalist Club activists who chairs the Committee to Defend Immigrants and Muslims at Hunter College, made the case for building a rapid response network throughout CUNY, and cited recent examples of direct action against deportations from several parts of the U.S., as well as the “Transport Workers Against Deportations” in Los Angeles.

Campbell stated that the tasks of such a network include alerting students, faculty and staff of any ICE presence on or near CUNY campuses, and systematically laying the basis to “mobilize students, faculty and workers” to actually block attempted deportations, and “shut down CUNY schools in response to a deportation or detainment.” She emphasized that this is counterposed to illusions of collaboration with the administration, and some headway was made in building this network.

The conference was called by the CUNY Sanctuary Committee, which has been meeting since early 2017 at the Professional Staff Congress union hall. Bringing together student and union activists from across the City University, these meetings have worked towards building a university-wide rapid response network. At the March 3 Grad Center conference, it was noted that a letter sent by the CUNY Sanctuary Committee resulted in Kingsborough Community College officially eliminating restrictions it had applied to undocumented students receiving grants from the College Foundation. This was cited as a small but relevant example of organizing at CUNY to fight all kinds of anti-immigrant measures.

Organizers of the March 3 conference expressed the hope that participants will return to their campuses with redoubled dedication to the ongoing work of organizing in defense of immigrants and the rights of us all. To get involved in these efforts, please write to Committeetodefendimmigrants@gmail.com