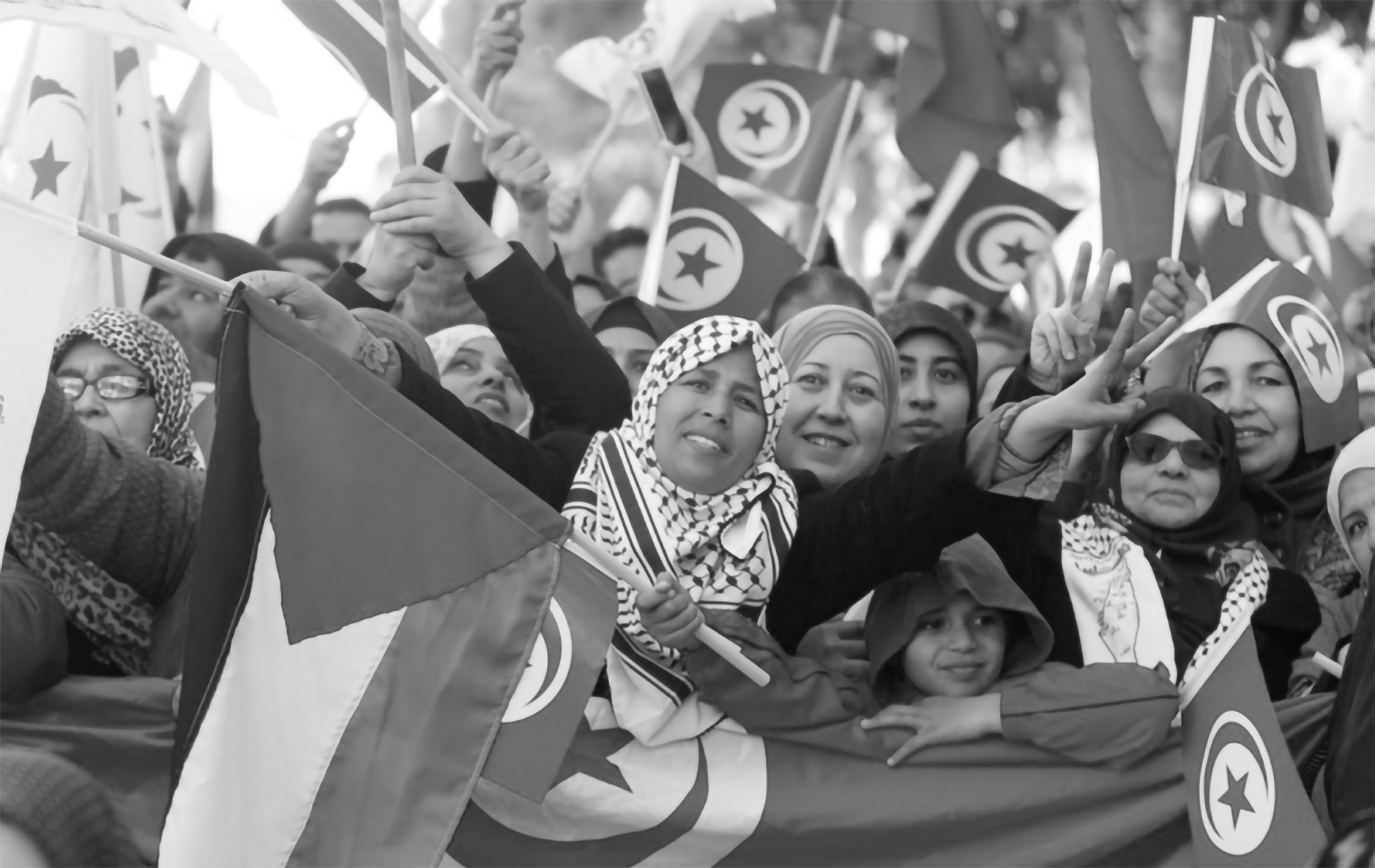 Tunisia’s first openly gay presidential candidate received a burst of worldwide media attention when he launched his candidacy in early July. Yet very few media outlets followed his story when his application to run for president was blocked by the Tunisian election authority in August. In October Kaïs Saïed, a conservative critic of homosexuality, was elected with a majority of over 70%. Aidan Chivers analyses the developments since he spoke with Baatour about his experiences and ambitions for Tunisia back in July.

For Mounir Baatour, Tunisia’s most prominent LGBT rights advocate, the election of Kaïs Saïed came as an enormous disappointment. The new president is the antithesis of the values on which Baatour ran his campaign. A socially conservative figure, who opposes gender equality in inheritance law and supports the death penalty, Saïed sees homosexuality as the product of Western cultural infiltration into Tunisia.

Mounir Baatour took to social media to express his frustration at the election results. They were evidence that Tunisian democracy was ‘ailing, and profoundly weakened’. In the second round of voting, Baatour had given a strong endorsement of Saïed’s rival, Nabil Karoui, who ran on a socially liberal platform and had ambitious plans to feed and take care of the nation’s poor.

The election of Saïed represents the final setback after what had been a bittersweet but invigorating presidential race for Baatour. Following the announcement of his campaign, over 650 articles were written about him in 120 different countries, and Baatour quickly assembled a team of over 300 local activists. He gathered the 10,000 signatures required for candidates who do not have the endorsement of established politicians. With the wind in his sails and worldwide media showing considerable interest in his campaign, Baatour was full of optimism.

But international interest had faded by the time that Baatour’s candidacy was unexpectedly blocked by ISIE, Tunisia’s independent electoral authority. Candidates are required to be at least 35 years old, to deposit the equivalent of $3400 at the country’s treasury, and to have the signatures of either 10 members of parliament, 40 municipal leaders, or 10,000 citizens. Baatour met all the requirements, yet when ISIE produced a list of 26 candidates whom it deemed to have met the criteria, Baatour’s name did not feature. His attempts to find out any details have been met with silence.

The lack of transparency comes amidst other alleged irregularities in the electoral process. Karoui, who from the beginning was one of the two frontrunners in the race, was unexpectedly arrested for money-laundering on 23 August. His detention came in the heat of the campaign before the first round of voting on 15 September, and Karoui’s team argued that his arrest was politically motivated. Baatour visited him in prison and fought for his release. He was finally freed only hours before the final television debate with his rival Saïed on 11 October.

In Baatour’s statement on Saïed’s victory, he suggests that Karoui was held ‘with no credible judicial explanation’ because he was ‘a danger for the political intelligentsia [as the] leader in the polls. […] The dice were loaded’ against him.

Since the election, Baatour’s public tone has been marked by a sense of foreboding about what the presidency means for Tunisia’s young democracy. This contrasts with the optimism and passion he conveyed when I spoke to him in July about his vision for Tunisia’s future.

Back then, Baatour was able to spare me an hour between returning from the office and beginning the evening’s work co-ordinating the campaign with his activists. For years he had defended members of the LGBT community in court, and he planned to continue his full-time job as a lawyer alongside the campaign.

Despite the years of struggling for the recognition of LGBT groups in Tunisia and the many challenges ahead of him, Baatour spoke about his experiences and ambitions with a sense of calm and clinical detachment. There was an unmistakable drive in him but, sitting back in his string vest with cigarette in hand, he talked about everything he had been through in a remarkably relaxed manner.

‘It was four months that I spent in jail, in the end’, he told me. ‘It was meant to be three, but they made it four. What can you do?’ Baatour’s time in prison for homosexuality was a defining moment in his life. Since his release, he has worked all the more relentlessly for LGBT causes, culminating in his running for the presidency.

Baatour was twenty-five years old when he first had the courage to come out. Although his family was accepting, many others were not. Looking back, he remembers taking it all in his stride. ‘I was a young lawyer, I was financially independent, and I had my own home. At that stage, I didn’t care about those who didn’t accept me.’

In addition to Baatour’s work defending those prosecuted for homosexuality, he helped set up Shams, one of Tunisia’s four LGBT organisations. Shams has attracted great support online, but its reception has not been universally positive. Its Facebook page frequently receives abuse.

‘Some say we are propagating perversity and that we are against the traditions of Tunisian society. For them, homosexuality is imported from the West. But it’s not true. Homosexuality has always existed in our society.’ A mere three months after we spoke, Baatour was to see the election of a politician who had expressed precisely this denigration of homosexuality in his campaign.

Of all the countries which saw an ‘Arab spring’ uprising back in 2011, Tunisia is often held up as the one major success story. Unlike more politically volatile nations such as Libya and Egypt, Tunisia has built a new, parliamentary model of democracy with legitimate elections, and has introduced progressive reforms such as equal inheritance rights for men and women.

For Baatour, the answer lay in promoting a secular Tunisia. He had planned to hold a referendum to remove Islam as the official state religion, a status it is granted by the first clause of the constitution and which is unamendable without a plebiscitary vote. Baatour saw a new, reformed, explicitly secular state as the only way to defend the country’s minorities.

The 2014 constitution represents a compromise between secular and Islamist interests. Although it was drafted under a government and legislative body dominated by Islamists, many clauses protecting civil liberties are secular in inspiration.

Following the 2014 elections the secular, center-left Nidaa Tounes worked in coalition with the Islamist party Ennahda, which stands for a more moderate form of political Islam than that found in many neighboring countries. But for Baatour, this coalition was a betrayal of secular values. ‘They [Nidaa Tounes] said they wouldn’t work with Ennahda. They were liars.’

Baatour finds the inclusion of any form of Islamism in Tunisian politics highly threatening. In our interview he even went as far as to link Ennahda explicitly with violence. ‘For me the Ennahda party, and political Islam, is the incubator of fundamentalism and terrorism. Maybe Ennahda is not terrorist itself, but the very idea of political Islam gives the conditions and the structure for terrorists to operate. I would never – never – work with them.’

Hence Baatour’s plans for a referendum to change the constitution and to remove Islam as the official state religion. This would have been his first move as president. Was there no way to protect personal freedoms within the current constitution? ‘No. We need a secular state to protect all our minorities: Bahá’í people, Jewish people, Christian, Ibadi people, Shii people, atheists – and of course LGBT groups.’

Baatour’s Liberal Party has used the slogan ‘Liberté, Égalité, Laïcité’. Would Baatour’s vision of secularism have taken the French laïcité as its model, a radical form of secularism which pushes religion out of public life entirely? He shied away from fully embracing the full French model. ‘I am for a secular state which can protect everyone. But not as extreme as laïcité in France’.

A keen sense of Tunisian history informed Baatour’s vision of a modern secular state. ‘Our identity is plural. Tunisia has more than 3000 years of civilization. Many civilizations have come to Tunisia: Byzantine, Roman, Ottoman, Spanish, French, Arab…’ For Baatour, Islam’s position as the official state religion threatens to create a single national identity rooted in religion and to flatten out the many diverse aspects of Tunisian society. He stressed that ‘we are not an Arabic civilization – we are a Tunisian civilization. A plural culture, with many other influences.’

But Baatour’s understanding of plurality is not merely synonymous with ‘multiculturalism’. Nor is it neutral in relation to the different strands of Tunisian identity. While they are all to be respected and valued, he would have looked to promote and preserve an indigenous Berber culture. ‘I will inscribe the Amazigh [Berber] identity in the constitution, and I will push to teach the Amazigh language in schools.’

A certain pride in the distinctive characteristics of the Tunisian dialect of Arabic is symptomatic of Baatour’s understanding of Tunisian identity: he told me that ‘a great many words in our dialect are of local origin’. His plan was ‘to teach Amazigh, Arabic, French and English in schools. But the three national languages will be Amazigh, Arabic, and French.’

Secularism was at the heart of Baatour’s vision for Tunisia, but there was much more besides. He had ambitious liberalizing plans for the economy, for instance. Despite comparatively strong growth since the Arab spring, the economy had stalled and in 2018 Tunisia was shaken by protests over the rising cost of living.

Baatour had identified two major threats to the economy which he aimed to target. Firstly, he believed that excessive regulation and bureaucracy had limited inward investment, and that foreigners had been particularly affected: he had plans to encourage economic growth by allowing free trade for every sector except agriculture and by removing a range of regulations. His second major concern was the ‘informal sector’, which he estimated to be worth around half of the country’s economy. By cracking down on the black market, he had looked to raise the money needed to provide tax breaks for new businesses and thus to encourage innovation.

Baatour also had proposals for social, cultural, and environmental programs. But the need for a secular state was at the heart of his manifesto and was the theme to which he consistently returned in our interview. His referendum was designed to change the fabric of Tunisian political and social life, fully realizing the potential he saw in the Arab spring.

Powerful driving forces were at work in Baatour: a desire for greater civil liberties after a long cultural memory of repression; a deep mistrust of political Islam; and aspirations for a modern, economically healthy, liberal Tunisia which would be ready to engage with the world.

A few months on, these dreams seem further away than ever. With his presidential campaign blocked and a strongly conservative candidate elected, Baatour’s efforts might on the face of it seem like a failure.

Yet Baatour remains proud of the awareness he has raised for the LGBT cause. His presidential campaign, and the continuing work of his Shams association, have put homosexuality firmly on the political agenda in Tunisia. In the country’s first televised debate, the candidates were asked for their positions on homosexuality, which Baatour sees as a major step forward. He has also been greatly encouraged by the support he has received on social media, both within Tunisia and from abroad.

Perhaps the greatest social achievement which Baatour and Shams have achieved is a change in the language employed by mainstream media. ‘We have brought the debate into media consciousness, changed the vocabulary about homosexuality’, he tells me. ‘In the past the media spoke about “perversity”; now they speak about “homosexuality”. It’s a great change.’

Despite the setbacks, Baatour’s conviction and determination remain undimmed. As he has told his supporters on social media after the election, ‘on the road ahead, you will be able to count on me’.