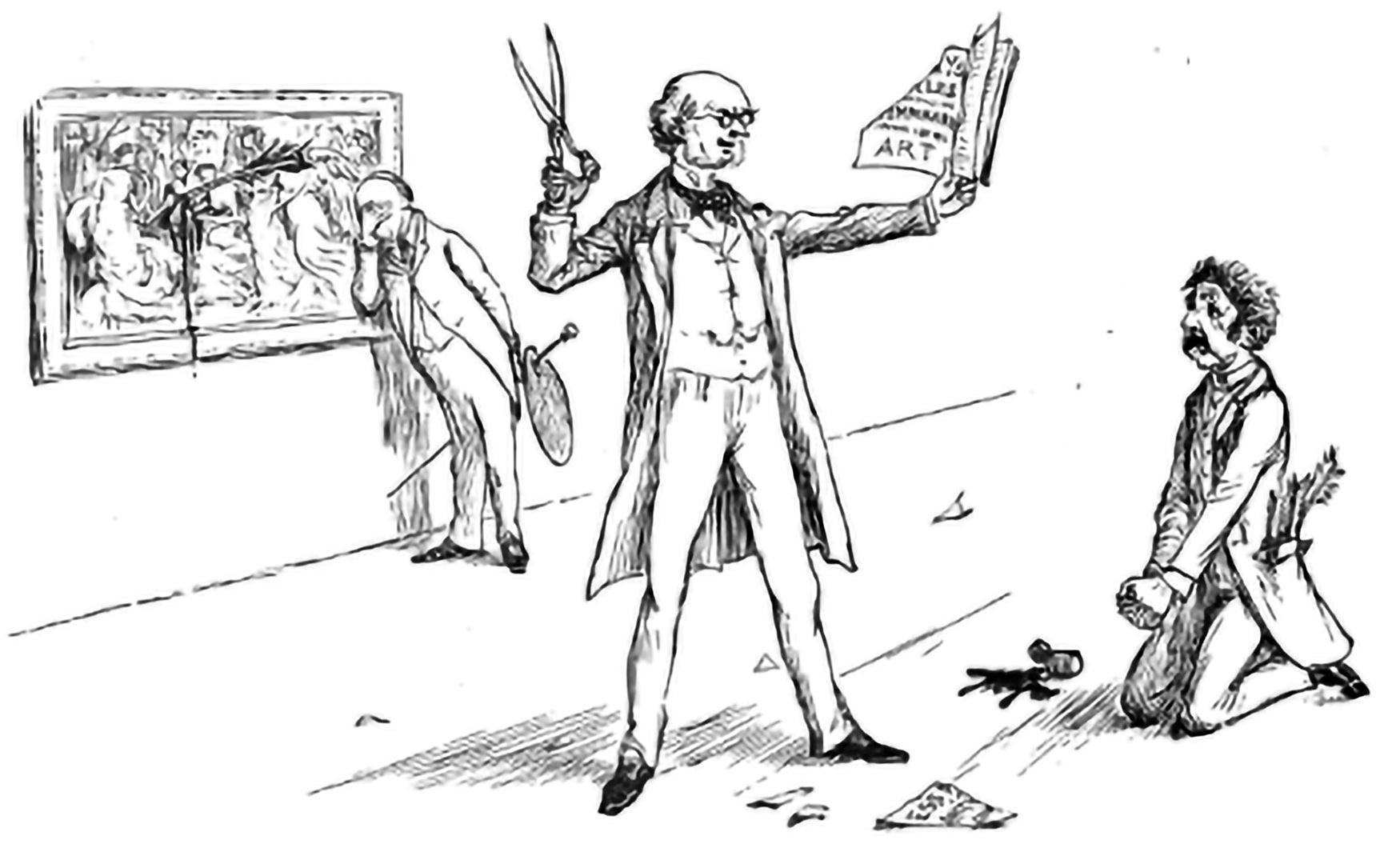 An art critic that has damaged an artist’s painting with his pen, begs to not have his art essays cut up

The etymology of ‘essay’ is a familiar cliché that I’ve come to indulge with students at the beginning of a semester. Take the namesake of the formidable term-paper, master of many sleepless nights and frantic mornings, and follow the twists and turns of its French heritage to stop at the simple essais: ‘to try,’ to make ‘an attempt.’ The lecture practically writes itself. Writing is the act of trying, not perfection. Ignore that paralyzing temptation to be Shakespeare in the flesh and simply think. Find that half-born idea, tear it out into the world, and throw it onto the blank canvas of the page. Flow?

Coherence? Style? Mere products of revision. (And they all come out in the wash anyhow…)

Essais. The word hangs in the air as I consider the last semester. It was practically a motto of all educators. Just. Try. Try and keep the class running. Yes, we know you’ve had a mere weekend to create an online course. Try. Yes, American telecommunications are marred with inequity and your students can barely access class. Try. Yes, their parents are ventilated, they work as essential employees to afford their education, the global market is halted, and every day they hear counts of the newly dead, but just try. Essais. Who are we to surrender continuity during global crisis?

Since my first college English class – 45B, 18-19th century literature, Prof. Ian Duncan – I have dreamed of being an English professor. The sales pitch is quite familiar: a career dedicated to studying knowledge and culture, to excavating the human mind and seeing how this miracle called language comes to shape ideas, faiths, realities. To live such a life and to be able to draw upon it in the fostering of young minds – and to be compensated for it to boot – seemed magical, a consummation devoutly to be wished. So please understand the weight of my words when I say that come the end of this academic year, after weeks of Baldwin, Ellison, Chekhov, and Swift, asynchronicity, modulating expectations, and laptop distributions, I was at a loss to justify teaching. Essais. What is there to try when a student has lost their father overnight after the promise of apparent recovery? What can be attempted when a first-year, excited to begin the plunge into their future career, becomes orphaned, not by war or famine, but by breath? Who are we to ask for continuity precisely when life has the chance – no, the right – to break?

And yet, this request was what directed us members of the university. It returned like a mantra in administrative emails. Educational continuity. Teaching must always persevere, throughout the darkest of hours. The journey of self-discovery cannot be abandoned for a moment. Even the decision to break the continuity of in-person courses was mired in inertia. In online petitions and social media tirades, our students demanded abstention from standard instruction. Instead of a commitment to education, they saw only indifference and mercenary exploitation in our refusal to close. While we can claim ignorance to our understanding of the severity of the crisis, this would ignore a simple question: how is education to continue when its very recipient, the student body, chooses to abstain? If students saw no point in in-person instruction, whom exactly was the university continuing for? The hallowed Ivy in Harlem and the affluent on Washington Square, shutting their gates and emptying their lecture halls, knew the answer to this. Despite their wealth and privilege protecting from the worst abuses of the disease, they saw student fears as necessary indicators. But us? We narrowly lost our fingers keeping the shutters open. The historically disenfranchised that call CUNY home needed a Gubernatorial Tweet for assistance. We, however, needed continuity.

Continuity. Try. Essais. These albatrosses fly beyond the university. How many lives could have been saved if a manager forgone requesting a sick employee to try working today? Could we have avoided the recent upsurge in diagnoses if the markets didn’t equate continuity with profit and breakage with loss? What good would have been accomplished if those making an attempt to open beaches for Memorial Day had written essays instead? The pandemic thrives on continuity, and we seem so eager to accept the former so long as we may have the latter. We go so far as to even adopt our language to accommodate, as ‘quarantine’ and ‘crisis’ become, ‘new normal,’ ‘adjustment,’ and ‘calibration.’ As if it is the most natural behavior to assume normalcy during a pandemic. Life must try; it must essais.

In matters of fairness, faults are legion, and their degrees are varied. There are entire governments to be held accountable. But we cannot fool ourselves by mistaking shared guilt for innocence. The very mechanisms that created this crisis: exploitation, globalism, eradication of public services, have been the fodder for academic research and study for half a century now. And yet, not only do they remain, they have gained strength, as attested by the mountainous corpus on such subjects that has only grown over the decades. We, the public university, ostensible bastion of critique, reason, and equity, driven by the mission of advancing the public good through knowledge, have known that the current systems could not maintain human life and capital equally. The writing on the wall was there; we have long known something was going to happen. But nothing changed. Though we have cried out against austerity, defamed neoliberalization, and provided armchairs for the most vocal of Marxists, though we launched diversity initiatives, touted ourselves for social mobility, and paid lip- service to public scholarship, we have abstained from even daring to oppose the union of state and capital that first founded us. Worse. We have fueled it. This terrible machine that reduces the ineffable complexity of human life to economic quantity continues to operate freely through our halls, fueled by our research, wasteful expenditure of public funds, ineffectual critique, and apathy. True, such may also be said of our private counterparts. They too play a role in facilitating the expansion and implementation of capitalistic force that bring death and ruin. But they have never hid these facts behind an appeal to public good. We do. We defend our existence on the grounds, not solely of research, but of public utility, correcting the original sins of race, poverty, and misfortune with the promise of opportunity. And yet, our efforts have attacked but the surface of the structures that exploit these ills, and we know it. We did not spread this disease, but we enabled its existence.

In such a statement, I know I risk hyperbole and perversity. Many of us have suffered and lost.

Many continue to do so. The pain is unbearable. The assignation of guilt is unfair. And I agree; we came here as seekers of knowledge, initiates to a priesthood of truth. Should not the question of changing the world be left to those whose hearts lead them to the political arena? But, as even the practices of social distancing and mask-wearing acknowledge, for even one to forsake social responsibility is to damage us all. People are dead. Jobs are gone. Livelihoods are precipitously dependent on outdated welfare systems. And we, the university, could and should have done more. Murmurs should have been incessant dins and our tomes of theory should have been guides to praxis. Yes, to say this is unfair. But this is a recognition we academics in particular must come to terms with. Though we have become familiar to the practice of critique we continually fail to direct it beyond that outside ourselves. This is the enactment of minoritization. That is where power is located. Far too often do we avoid recognizing ourselves as constituent members of the very social systems that become the subject of our critique. In seminar, we see our instructors as emblematic of the institution. But when teaching, grading, interpellating our students as political subjects, we are somehow exempt from this allegiance. When we are confronted by CUNY’s bureaucracy, we see the administrator as the human engine for exercising institutional power. But when the academic becomes the administrator? They are merely bound by rules beyond themselves. Caught. Constrained. Separate. Rather than succumbing to our institutional roles, we must recognize that such institutions are no more than their human actors.

Social injustice is not a monolithic structure that one fights alone; it is a participatory relation enabled (or resisted) by one’s actions within. We are not powerless; only willfully unaware.

For all his faults, even Plato recognized that the first duty of knowledge was to impart it to others. The moment one steps beyond the cave into the light, they realize a duty to break the chains of those that remain within the darkness, ignoring whatever misguided pleas of continuity they sound.

That the university privileges and prioritizes research and publishing – itself remaining self-circulating within the professoriat – before this task demands a corrective. Teaching, public scholarship, affecting policy beyond Twitter clapbacks and crowded public lectures, these must become the primary duties of the university if the recurrences of crisis are to end. There must be movement beyond this antiquated system of circular intellectual production and towards the instrumentation of research for pragmatic effect. And the first act must be in recognizing ourselves, not within, not participating, not manipulating, but as the university. Recognize that every overpriced textbook you assign to your working-class students is a weaponization of education against class. Acknowledge that the excessive demands you place on your research assistants contributes to the misuse of precipitous labor. Question each article you write, every project instigated, each lesson taught with the query, “Does this effect the change required for a better world? Or do I enable inaction?” And when a virus threatens the disenfranchised that your work ostensibly serves, be among the first to abandon the logics of continuance. We must come to terms with the fact that every act of exploitation, silence, and collaboration leaves us complicit. Only by this recognition of authenticity can one move to disrupt academic inertia and dispel intellectual onanism. Yes, there will be guilt. Yes, our ethical evaluation of ourselves will suffer. But we can at least begin from a position of honesty, a position of truth.

Am I suggesting that we are one public article about wealth redistribution away from ending all outbreaks forever? No. My love of scholarship does not delude me that all disciplines are equally equipped to manage crises. But I do believe that prioritization of public engagement will provide a platform to acknowledge there is something deeply wrong with a world where the negotiation of economic gain and human costs are even considered. If we may even allow the public as a whole to experience disquiet, we will have already made progress. Of course, this reorientation of the university will not come overnight. The weight is mighty, the gears are rusted, and we are caught in the grasp of tragedy. We must take our time to grieve and process. We must permit breakage. But when that time has passed (which, alas, it must, continuity still remains), then we must ready ourselves to begin the attempt. To try. Here, we must essais.