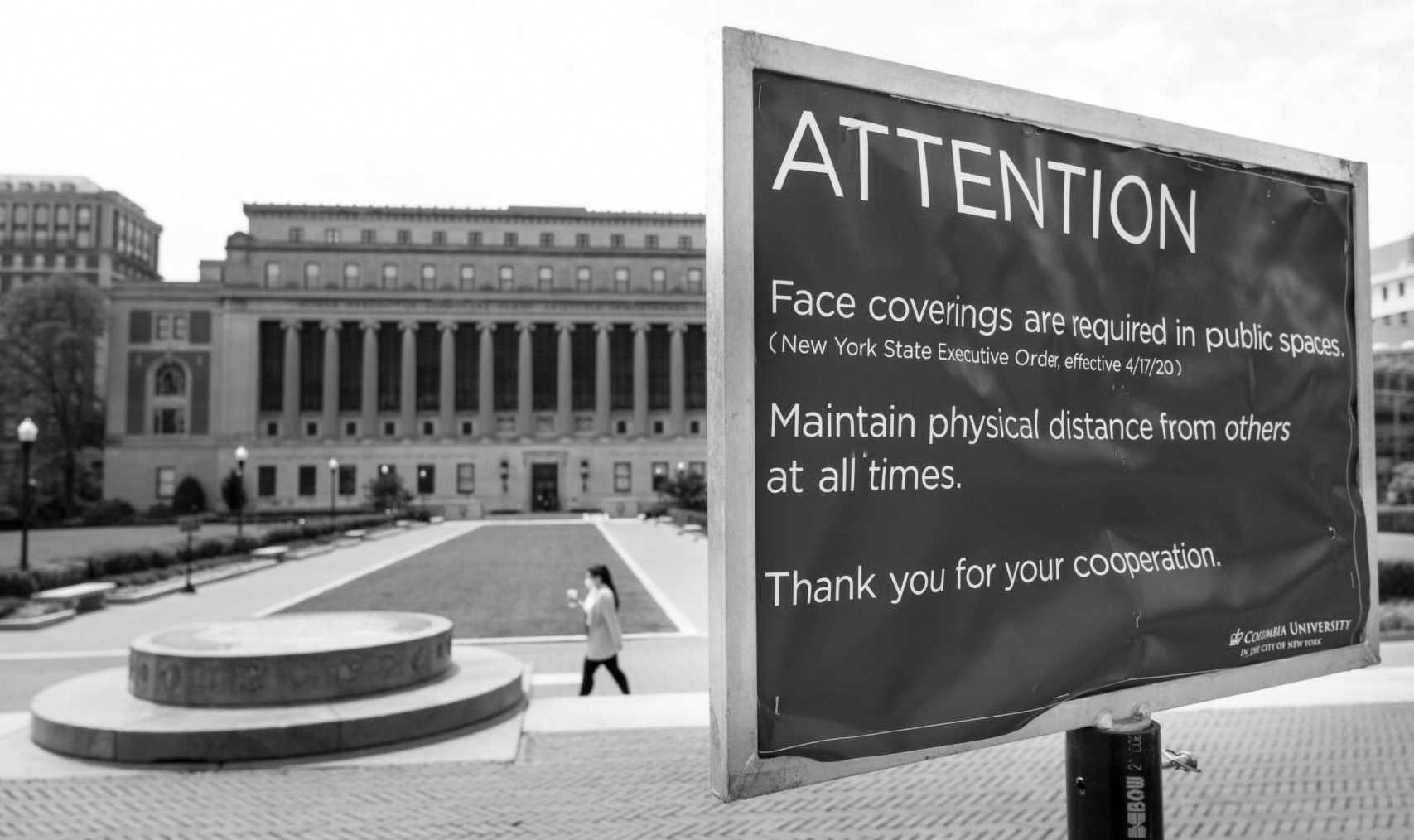 In late March, during the still-early stages of CUNY’s transition to online learning and the city-wide shutdown, graduate student workers founded PhD SOS, a group committed to grassroots organizing for graduate student needs under the pandemic. Their first action was to deliver an open letter signed by more than 1300 Graduate Center students, faculty, and staff demanding an emergency one-year funding package to all PhD students. After President Muyskens denied this request, they expanded their efforts and numbers to continue fighting for graduate student protections and support.

As part of these expanded efforts, I wrote and distributed a survey in collaboration with three other PhD students to evaluate the pandemic’s impacts on the Graduate Center’s student body as a whole. The intention was to determine the biggest issues facing our fellow students in order to prioritize organizing efforts, as well as to gather data for our arguments to the GC administration. The purpose of this article is to share a summary of our results.

This was an informal survey conducted via snowball sampling on Google Forms. In social science, snowball sampling is a research technique in which additional participants are recruited by asking participants to share the survey among their own acquaintances. Therefore, the sampling pool is biased by existing social relationships and may not be representative of the entire population. After writing the survey, we distributed it to the PhD SOS email group and encouraged everyone to fill it out themselves and share with their departments. The Doctoral Students Council agreed to distribute the survey on our behalf to their email list, and some individual students also shared the survey on other departmental and student group listservs that they belong to, as well as on their personal social media accounts. Between May 19 and June 6, we received 111 sets of responses, but two of these were duplicates and therefore excluded. All questions were optional, so not every respondent answered each question.

The first question asked participants to identify their role at the Graduate Center. The results from this question show that 90 PhD students, 18 master’s students, and one recent PhD graduate participated. One of the master’s students also works as a staff member at the Graduate Center. Based on these numbers, the survey is not representative of the student body or the wider campus community as a whole, since master’s students make up a larger portion of the full student body compared to the proportion of participants, but it is broadly representative of PhD students (90% confidence level, ± 9% margin of error). This means that for any percentage-based claim about PhD students (such as “According to this survey, 25% of all students lost some or all of their funding as a result of Covid-19”), we can be 90% confident that the real percentage for the full PhD student population is between 16% and 34%.

Responses were sorted into categories based on common themes or main ideas for each question. Therefore, each category name is the general paraphrase of the author and is representative only of the substance, not the phrasing, of participants’ answers. Because every question except for the first was open-ended, many students’ responses for some questions were coded into multiple categories.

How Covid-19 Has Impacted Student Funding and Other Financial Circumstances

The second question on the survey read as follows: “If you are a student, what was your academic funding situation before the pandemic, and how (if at all) has it changed? Or, if your funding remains the same, how have your costs changed (if at all)?” There were 106 responses to this question. Summary of full results:

A plurality of students (32, or 30% of those who responded) reported that their funding and their expenses have remained the same as a result of the pandemic. However, several of these also noted in their answers that they were not fully funded to begin with, so “remained the same” should not be taken as an unambiguous sign of stability.

Furthermore, between those who have already lost income, those who are nearing the end of their funding, and those whose future income security is unknown, more than half (57%) of all students surveyed are currently experiencing increased financial hardship and/or precarity during the pandemic, and many students whose financial situations have remained stable since the beginning of 2020 were already precarious.

The remainder of the respondents said that their funding has remained the same but their costs have gone down (5), a prospective grant or other funding opportunity had been canceled (4), or that they had received a Covid-19 emergency grant (1).

As context for this information, the “full funding” of a 5-year GCF funding package is already considered “very low income” according to 2020 HUD data for NYC.[1]

The Concerns of International Students

The next question was specifically directed at international students: “If you are an international student, how is the pandemic and related issues affecting you financially and in terms of immigration and visa status? What are your concerns and how do you think and want CUNY-GC help with your specific requirements and needs?”

Only 34 international students responded to this question, but international students make up 24% of the total Graduate Center student body. Their concerns were almost uniformly distributed across three areas: financial worries (15, or 44%), concerns about future visa status (13, or 38%), and concerns about being stuck in either the U.S. or their home country without the ability to return to the other (16, or 47%). These concerns are, as the numbers suggest, related: many students are concerned that if they cannot return to the U.S. to teach in the fall, they will lose their funding and their visas. On the other hand, with many borders and embassies closed, some students who already needed to renew their visas soon are worried they will not be able to travel to do so.

Here is a summary of the full results from this question:

For those who stated what they would specifically like to see from CUNY, two said they thought international students ought to have priority for part time positions since they are often not allowed to be employed outside of CUNY, one suggested waiving tuition for students unable to return to the U.S. to fulfill the terms of their fellowships, and two just wanted clear answers about whether school will be in-person or online as soon as possible, along with protections for students legally unable to return due to the pandemic.

The fourth question asked, “How has the pandemic and related issues affected your studies/research/work/progress to degree so far?” 107 people responded.

We also asked how participants anticipated the pandemic affecting their studies/research/work/progress in the near future, if different than the present. 100 people responded, so each count is also the percentage:

Interestingly, this data suggests that most students at the Graduate Center are more worried about the logistical, financial, and access-related effects of the pandemic than they are about the imminent threat of the virus itself. Whether reopening happens in the fall, next spring, or even later, the material repercussions of the current situation will last much longer than that.

We next asked participants to list just their biggest concerns, either for themselves or for others. 106 people responded to this question, although it was not always clear if a stated concern (such as adjunct cuts) was because they would be directly impacted by the factor or if it was out of concern for and solidarity with others.

One thing to note about these responses is that while nearly half of all students surveyed reported experiencing or anticipating research delays, far fewer people listed their ability to progress in their research due to lab, library, or archival access as one of their top concerns. A far higher number are most concerned about funding and job cuts at CUNY. Furthermore, the two categories immediately following “research delays” in frequency both indicate concern about other possible administrative and policy decisions that CUNY might choose to implement in the near future.

What Students Want from CUNY

Lastly, we asked participants, “What do you wish CUNY would do that would best help your physical, emotional, mental, academic, financial, or another kind of wellbeing?” 99 people responded.

Nearly half of these suggestions (43, or 43.4%) involve some form of direct financial support for graduate students, and the vast majority (79, or 79.8%) involve financial measures of some form, such as no layoffs, health insurance availability, no budget cuts, and cutting executive pay.

Additionally, very few students want CUNY to re-open the campuses (even partially) or have face-to-face classes in the fall. Most students prefer to protect the safety of themselves, their fellow students, and the faculty and staff that make CUNY possible. What students need— and want— most right now, in their own words, is money, stability, and emotional support.