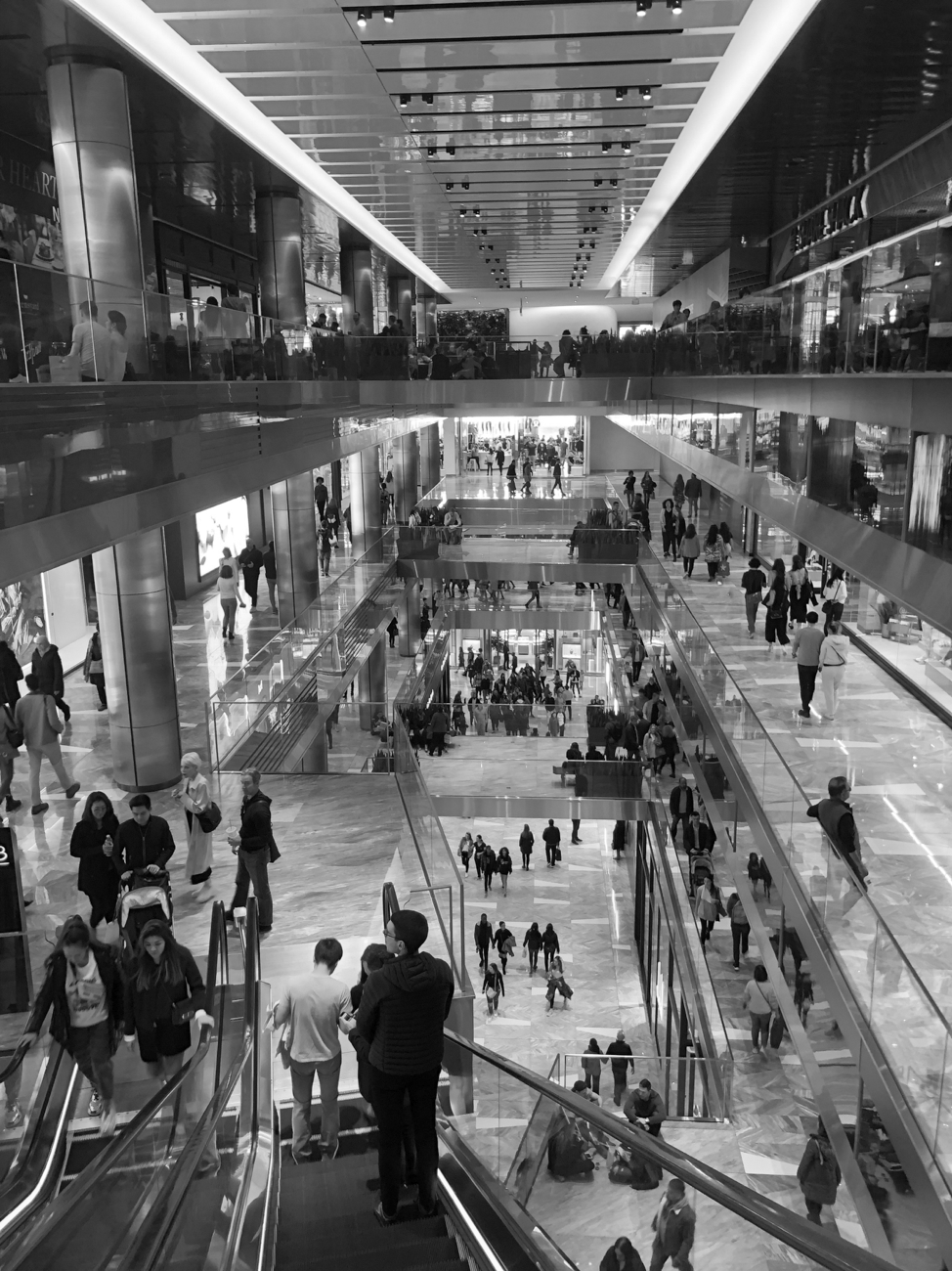 All photos credits by author

Early this spring, not long after the long-anticipated grand opening, I visited Hudson Yards on a cloudy, damp weekend afternoon. The adjacent, $2.4 billion extension of the Flushing line across the street was out of service for the day, so I approached the New West Side from Port Authority, with smells of the Hudson emerging from the horizon. I wasn’t alone: the sidewalks along 11th Avenue shrank to accommodate construction projects lining its corridor, forcing myself and hundreds of pedestrians (mostly wheeling mini suitcases to the de facto bus terminals on 12th Avenue) to drop into single file to pass. Echoes of the West Sides past are still visible – low density warehouses, parking lots, and a few 12 story industrial buildings still dot the landscape. But most of what you hear, and see, is construction.

You see the new towers long before you reach them. Like most skyscrapers, the Hudson Yards towers can orient you into place, a new beacon to clearly identify the far West Side. But their massive heights and generic design abstract their territory. Too big to miss, too big to fail, and too big to ignore. The design is bland banker bro: aggressive, characterless, and insecure. If you dressed the whole site up in a fleece vest and Allbirds, you might discern a building typology that suits it.

A massive private development site that is grounded with “public” park space and a bizarre interactive sculpture that literally leads to nowhere, Hudson Yards has been rightfully and righteously pilloried by left-leaning politicians, housing advocacy groups, economists, architects, and many, many New Yorkers. Critiques have been so vigorous, so vibrant, so creative, that piling more on would just be a cheap shot. But you should read them.

Anchored by a million square foot mall, the development is a shrine to global capitalism. Among the plethora of public financing instruments used to leverage this project was the EB-5 visa program, which provides visas to immigrants making serious real estate investments. The program was intended to catalyze investment in economically-distressed areas with high rates of unemployment. So…Midtown West? Really?

Related Companies, the prime developer of Hudson Yards, knew they wouldn’t qualify. An earth-shattering exposé of the sneaky maneuvers Related and city and state officials employed to access these benefits was published in April (Capps). To meet the economic criteria, the Empire State Development Corporation, New York State’s quasi-public economic development arm, “gerrymandered” the boundaries of the neighborhood to include Central Park and NYCHA housing in East and Central Harlem. All told, the estimated total financing through EB-5 came to $1.6 billion. This is, of course, in addition to the plethora of city and state tax abatements and financing instruments already used to prime and develop the site. Take that 7 train subway station, for example. Only a dream for city planners since the late 1960s, the station finally came to fruition under Mayor Bloomberg, who procured financing through Tax Increment Financing (TIF) bonds. New subways are an unmitigated public good though, right? Shared infrastructure, increased mobility – what’s wrong with that? 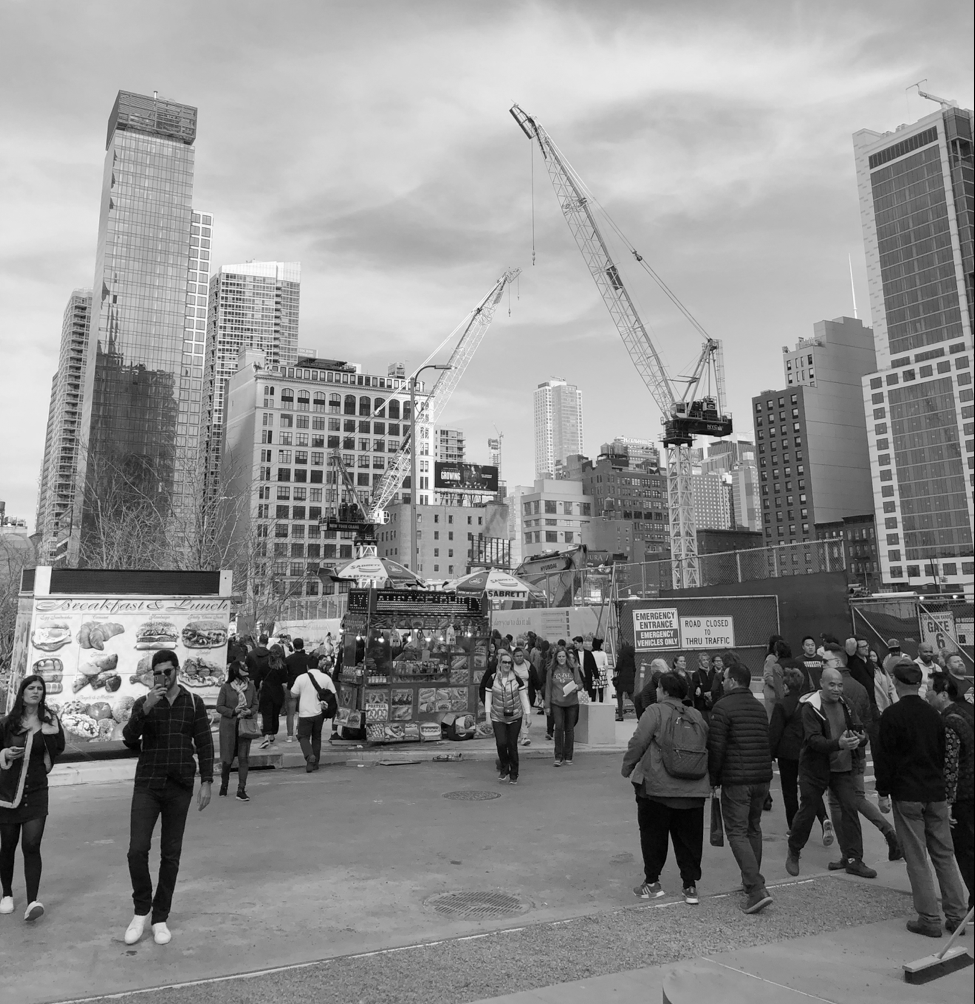 While there’s nothing wrong with expanded transit infrastructure per se, the costly investments the MTA made in Hudson Yards had more to do with creating demand and value where none existed before. The always cozy, now inextricable, relationship between private real estate and the state has reached peak visibility and impact. How did this partnership develop? How does it manifest? Who makes and executes these policies? And what alternative, in a neoliberal, globalized political economy, even exist?

Sam Stein, a doctoral candidate in Geography at the Graduate Center, presents a roadmap in his recently published book, Capital City: Gentrification and the Real Estate State (Verso, 2019). The book offers an excellent and accessible distillation of the crisis of the “real estate state,” a “political formation in which real estate capital has inordinate influence over the shape of our cities, the parameters of our politics, and the lives we lead.” Stein guides the reader through the history of western planning and development, from Baron von Haussmann’s demolition and rationalized reconstruction of Paris in the mid-19th century to the progressive reformers, City Beautiful advocates, and later “city practical” actors of the interwar and postwar era in America. City planning reflects ideologies, principles, and priorities of its society. As the welfare state weakened in the latter half of the 20th century, neoliberal tendencies and dogma took its place. Planning suddenly reflected a new logic, “private development for private accumulation.”

However private the designs and benefits of development may be under this model, real estate is inextricably linked to the customs and legal institutions (not to mention the capital) of the state. The 7 train extension, for example, boosted the land values of the Far West Side through public investments. Normally, real estate developers don’t have to develop public infrastructure. Some planning agreements in New York may include conditions, like public space provision or transportation fund contributions. But these are exceptions, not the rule, and attaining them is the result of activism, not policy. Public financing, whether it takes the shape of infrastructure, increased securitization and policing of space, new roads, new transit options (like the already-bloated ferry system debuted in 2017), or straight-up tax rebates, is what Stein calls “geobribery,” a public lure for private investment. 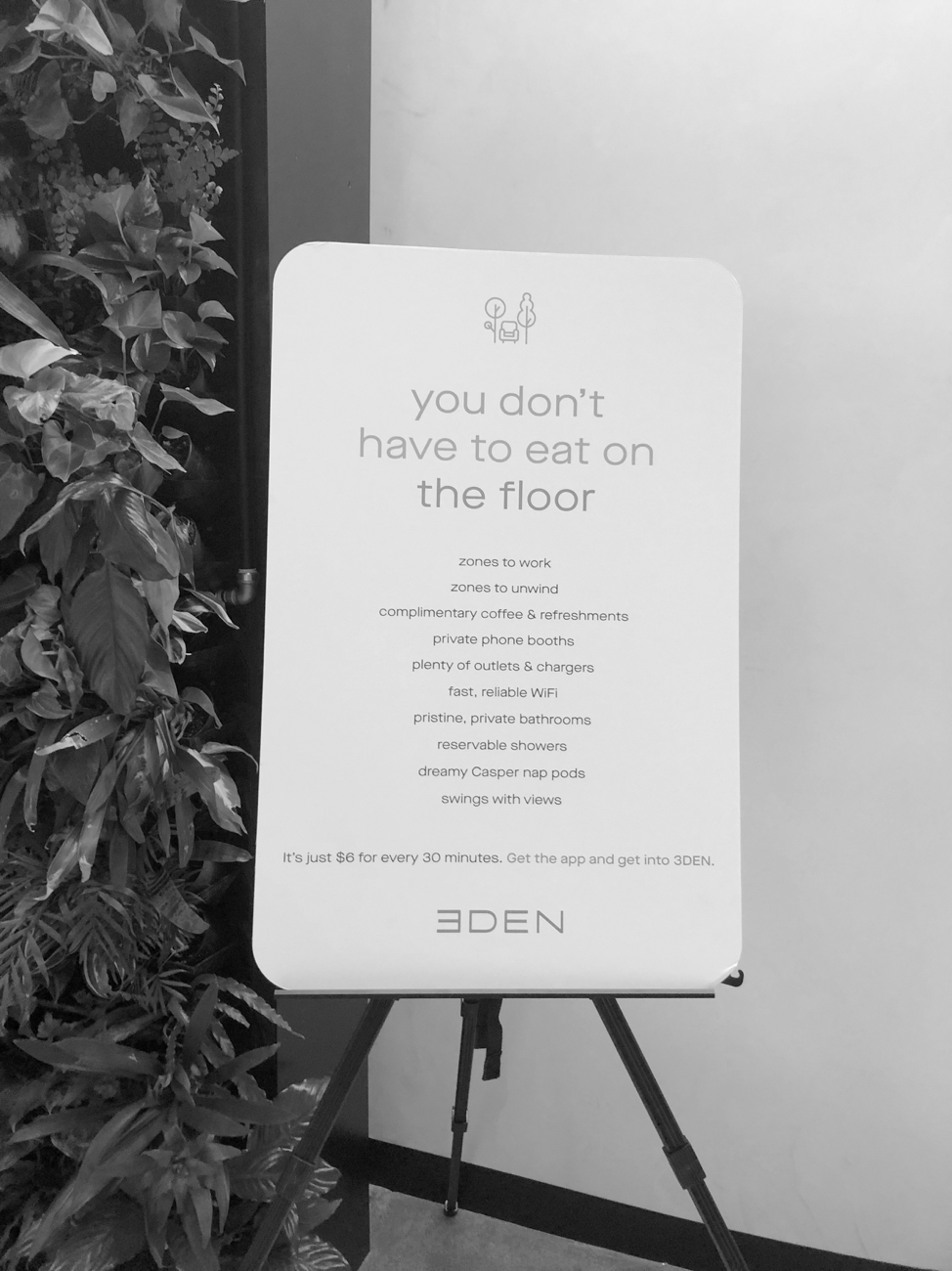 Planners use these tools to stimulate change in cities. Geobribes are one tool; land use policies are another. During Bloomberg’s three terms as mayor, 122 out of 123 proposed rezonings were passed, affecting 11,000 blocks, or 1/3 of the city’s total landmass. Predominately white, upper-middle class homeowning districts were able to procure downzonings, which protected their neighborhoods against encroaching growth and density. But in the majority of New York’s middle- and lower-income neighborhoods, neighborhoods that were home to racially and ethnically-diverse populations, change was sudden, dramatic, and state-enacted. The housing crisis had already emerged in this period, and city officials, operating under a classical economic logic that increased supply would ameliorate the crunch and cost, upzoned dozens of neighborhoods to increase density. It didn’t work out. The neoliberal tools available to planners and politicians, conditioned by ever-lower federal funding allotments for housing, depended on private capital interests to build affordable units. Stein selects an amazingly candid quote from Amanda Burden, head of the Department of City Planning, who admitted that, “I had believed that if we kept building in that manner and increasing our housing supply…that prices would go down. We had every year almost 30,000 permits for housing, and we built a tremendous amount of housing, including affordable housing, either through incentives or through government funds. And the price of housing didn’t go down at all. What we haven’t figured out is the question of gentrification.”

Under the ostensibly and nominally progressive administration of Bill de Blasio, little has changed. Sure, affordable housing is now a mandate for rezonings. But these rezonings have all taken place in low-income neighborhoods of color, communities that are already at the greatest risk of displacement. And “affordability” is a relative term in New York, whose metrics absorb the entire metropolitan region, including Westchester county. For a family of three, area median income (AMI) hovers around $77,700. Different shares of affordability (for families who make 40% of AMI, or $31,080, for example) are distributed to different income bands. But the preexisting median income of neighborhoods is often well below even the “affordable” levels mandated by policy. Private developers only have to dedicate a portion of their units to the program, leasing or selling the remainder at market rates. As Stein points out, “with deals like these, it’s no wonder many real estate leaders love this liberal mayor almost as much as his conservative predecessor. When it comes to land use and housing, de Blasio’s team has carried on many of the city’s real estate-friendly past practices and called it progress.”

The comity between the state and real estate takes its most brazen form in the literal head of state, everyone’s favorite real estate tycoon and reality television star. Stein’s chapter on the Trump family’s real estate heritage is among the most interesting sections of the book, effortlessly weaving decades of dubious deals with changing norms and shifting ideologies in planning, political economy, and policy. Geobribes incentivized Trump’s grandfather, Friedrich, his father, Fred, himself, and his sons and son-in-law. New York City was a complicit, even willing, enabler of this behavior for decades. During the height of the fiscal crisis in the 1970s, Mayor Abraham Beame bolstered Trump’s bids for abatements, saying “whatever my friends Fred and Donald want in this town, they get.” Even Bill de Blasio, the butt of every joke on Fox News, said publicly of Jared Kushner, “I respect him a lot. He’s someone who really cares about New York City and is someone that would be really helpful to us.” From Friedrich’s earliest investments in Queens following the subway line expansion in 1915, to Fred’s embrace and exploitation of redlining mortgage practices and slumlord tactics, to Donald’s “deal-making” over the Commodore Hotel, the Central Park skating rink, Trump Tower, and Trump Plaza – among others – the legacy of exploitation via real estate runs deep in our political present.

Capital City is a great primer for those with little background in planning policy. It makes transparent the mechanisms and tools that officials and developers have so made so rigorously opaque and diffuse over the years. For planners and policymakers with an eye towards the future, however, Stein also provides a blueprint. Starting with policies that are imaginable in our lifetimes (perhaps not under our current administration, but not too far beyond either) like shifting inclusionary development to the previously downzoned, protected white enclaves, reworking tax codes to disincentivize predatory development and financialization of land, and building coalitions between labor and housing activists, Stein echoes many legislative and policy proposals that have been presented locally and nationally in recent years. Some, like rent regulation, are relics of a bygone era that need our support for revival. But these policies, as Stein is quick to admit, still operate within a political economy of capitalism. To deal with the unintended and intended consequences of the real estate state, Stein urges us to “move beyond the systems we are familiar with and fight for an anti-capitalist city.”

Moving beyond current systems means thinking big, often bigger than we can imagine practicing. The principles of transforming urban life, according to Stein, should involve “public stewardship” over resources, infrastructure, and space; “unmasking the social relations that produce private property” through socialized land; and a “radical regionalism” that subverts boundaries and recognizes the realities of economic and social geographies. How do we get there? Politics are the instruments of change. To enact structural change, we need “large, disruptive mass movements, organized not only to make demands of the state but also to make the status quo untenable.” One only has to look to this past February, when a diverse coalition of immigrant’s right groups, tenant organizers, economic justice activists, and community members managed to completely disrupt the Amazon HQ2 deal in Long Island City. It felt like an impossible vision right up until it didn’t, until the noise reached the top and forced them to change their minds.