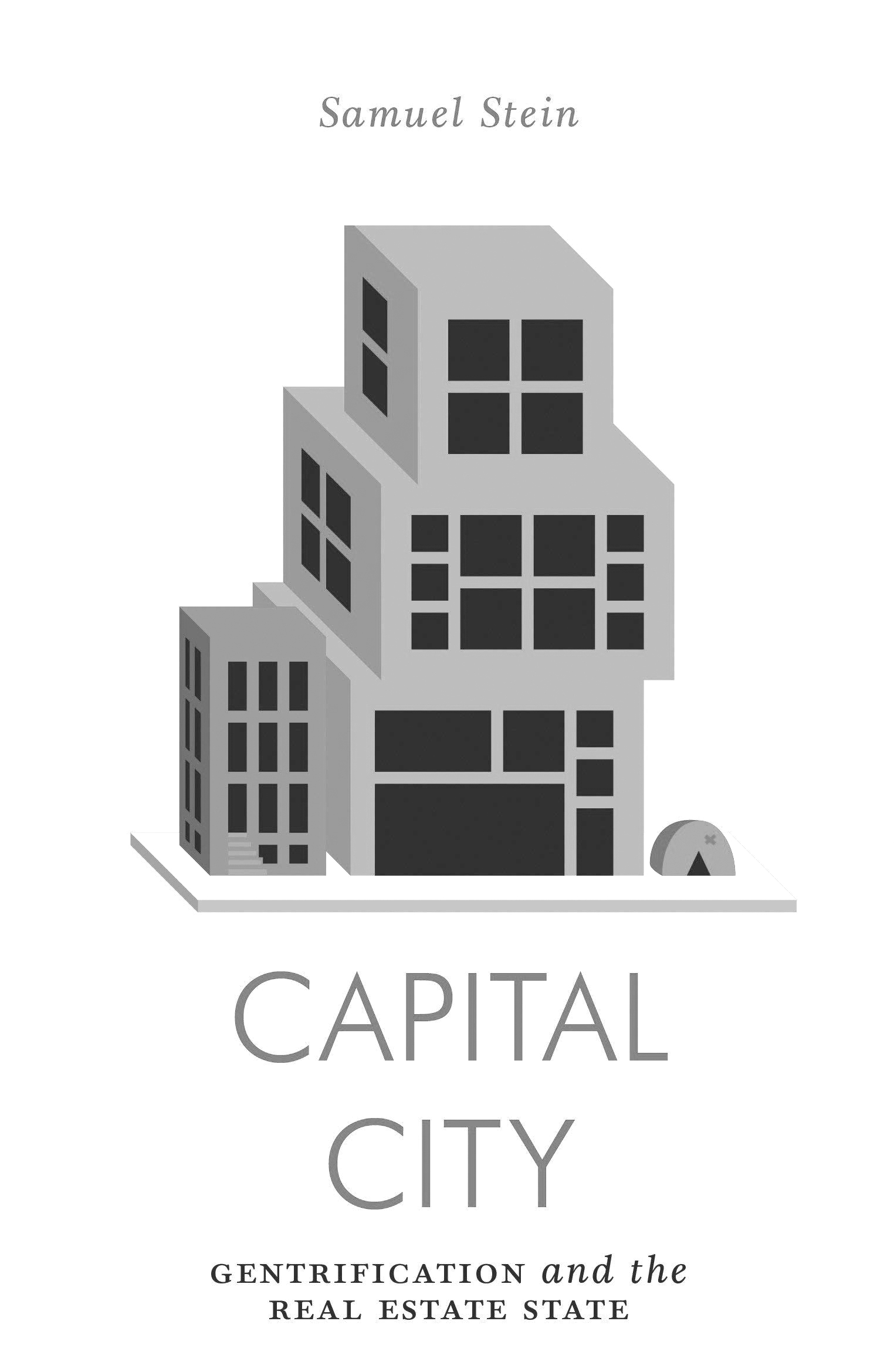 By 5:30 pm on a Thursday evening, Room 4102 at the Graduate Center was full. The walls at the back of the room were lined with people, eagerly anticipating Samuel Stein’s keynote on his book Capital City: Gentrification and the Real Estate State. Stacks of yellow paperbacks were perched by the entryway and Stein’s powerful opening reading from the introduction set the tone for the panel discussion. “Global real estate is now worth $217 trillion. 36 times the value of all gold ever mined. It makes up 60 percent of the worlds assets, and the vast majority of that wealth – roughly 75 percent – is in urban housing.” The panel was comprised of organizers and academics, including Tom Angotti (professor emeritus, Hunter College and CUNY Graduate Center), Hillary Caldwell (PhD candidate, Environmental Psychology), Monxo Lopez (co-founder of South Bronx United) and Rob Robinson (cofounder of Take Back the Land).

While the global dimensions of the power of real estate outlined in Capital City is staggering, local data just abstracts its impact further. Much of the discussion focused on how urban planning and real estate has squeezed the average city resident. “In New York city there are 2 million people paying more than 50% of their wages in rent.” Stein described this phenomenon as a “cash transfer from boss to landlord that you never see,” a familiar and darkly funny truism to the audience. Humor punctuated an otherwise sobering discussion about the extent of real estate power over tenants. Stein explores the history of real estate speculation and exploitation by tracing the Trump family’s origin story and their roles in real estate exploitation. The Trumps pushed the influence of real estate development in every major urban policy decision, from redlining to rezoning. Stein’s description of the family legacy contextualizes and underlines the connections between real estate, power and politics.

Rob Robinson, co-founder of Take Back the Land, began the panel discussion, explaining that he had known Stein for a long time. Robinson, who had worked with other PhD students at the Graduate Center for a decade, praised Stein’s ability to finish Capital City before his PhD was done. He added that the book’s accessibility made it a valuable tool for community organizing. “The key thing for me,” Robinson said, “is that he wrote this book in simple language.” One of Stein’s major contributions, echoed by other panelists, was his coining of the term “real estate state.” This term provides a powerful framework to understand the power and politics of real estate. It also provides the socio-political context to describe development, land use, urban planning, and rent. 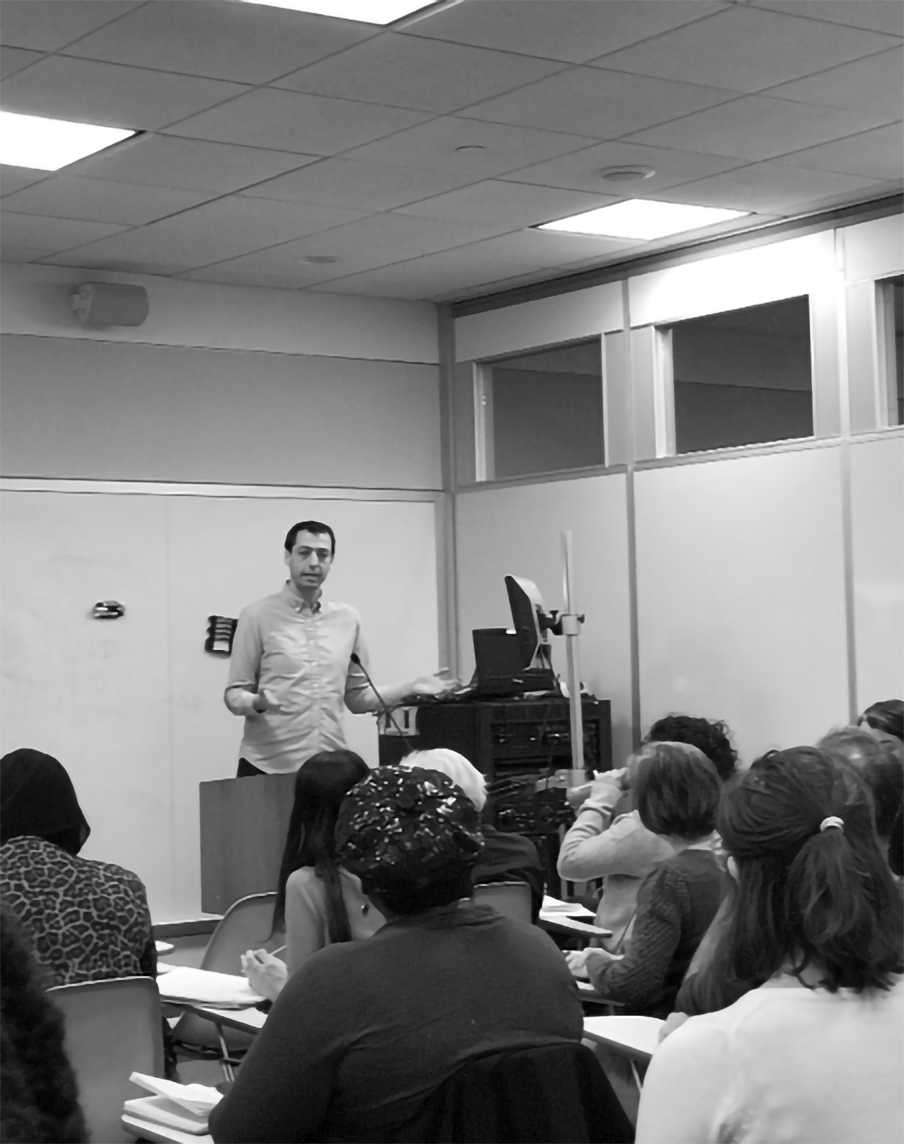 All photo credits by Author

Monxo Lopez, co-founder of South Bronx United, began his segment by describing the parallels between Capital City and the work of Marx and Engels. Analyzing the book from a Marxist perspective, Lopez emphasized that the exploitation of space and the battle over housing access is now the hallmark battle of the real estate state. Lopez urged the audience to think about the role of culture in this scheme. “These cultures are an important reason as to why people don’t want to leave their neighborhoods.” He mentioned the disparities that communities of color, compared to white communities, face when developers take over entire neighborhoods. 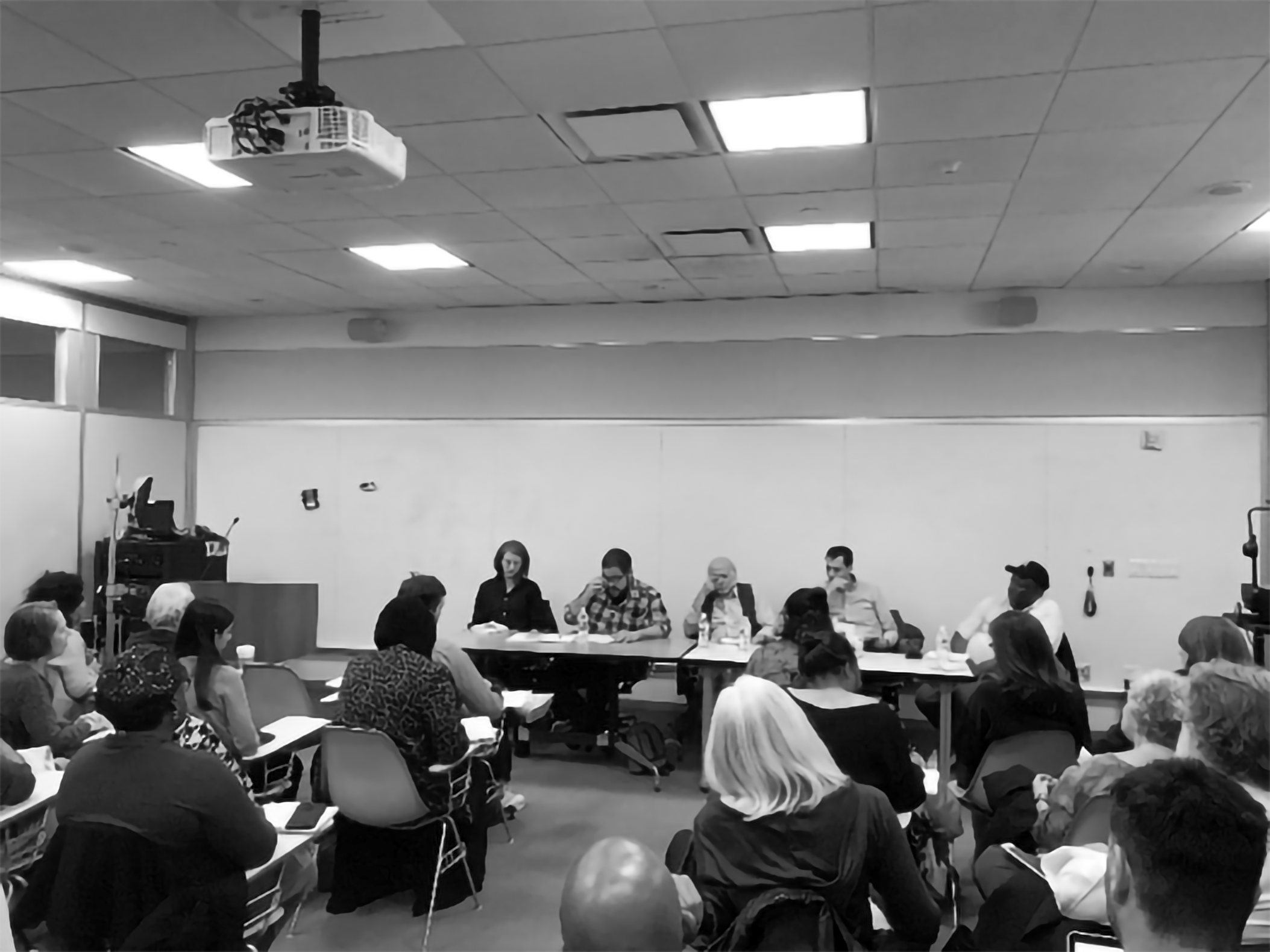 Prior to publishing Capital City in 2019, Stein wrote a variety of urban policy pieces for Jacobin. Panelist Hillary Caldwell noted in her discussion that the 2014 article “DeBlasio’s Doomed Housing Plan,” which she frequently assigns to her classes, is the best examination of the Mayor’s housing policy and still remains relevant today. Caldwell pointed out that the book builds off his examination of housing policy from the 2014 article, and offers new terminology to articulate the role of real estate in shaping the city. She also mentioned that the book is a productive guide for community engagement. “I find it helpful in thinking through the co-dependence of the State and the Real estate industry rather than talking about them as two different things,” she said. Caldwell connected her own academic research on community land trust to the arguments and data presented in Capital City. She posited that we must “reclaim the means of social reproduction” across a variety of domains, where we engage not only with housing but also employment.

The next panelist, Professor Tom Angotti, began by fondly recalling his first interaction with Stein as an urban planning student at Hunter College. Angotti recognized Stein’s potential as an author through his work as a research assistant. He noted that Stein’s great proclivity for research continued in Capital City, evidenced by his capacity to gather and express “the contradictions and complexities that activists encounter all the time.” Agnotti explained that urban planning and land use must be considered as a part of  the larger project of imperialism. “As someone who worked as a professional planner in HPD and as well as a planner in other parts of the country and of the world, I don’t think planners amount to much of anything,” Agnotti said. The misalignment between different levels of municipal government and finance make it a challenge for planners to bring visions to reality. Agnotti also mentioned that the book places urban planning within the larger landscape of finance and politics with nuance and detail. 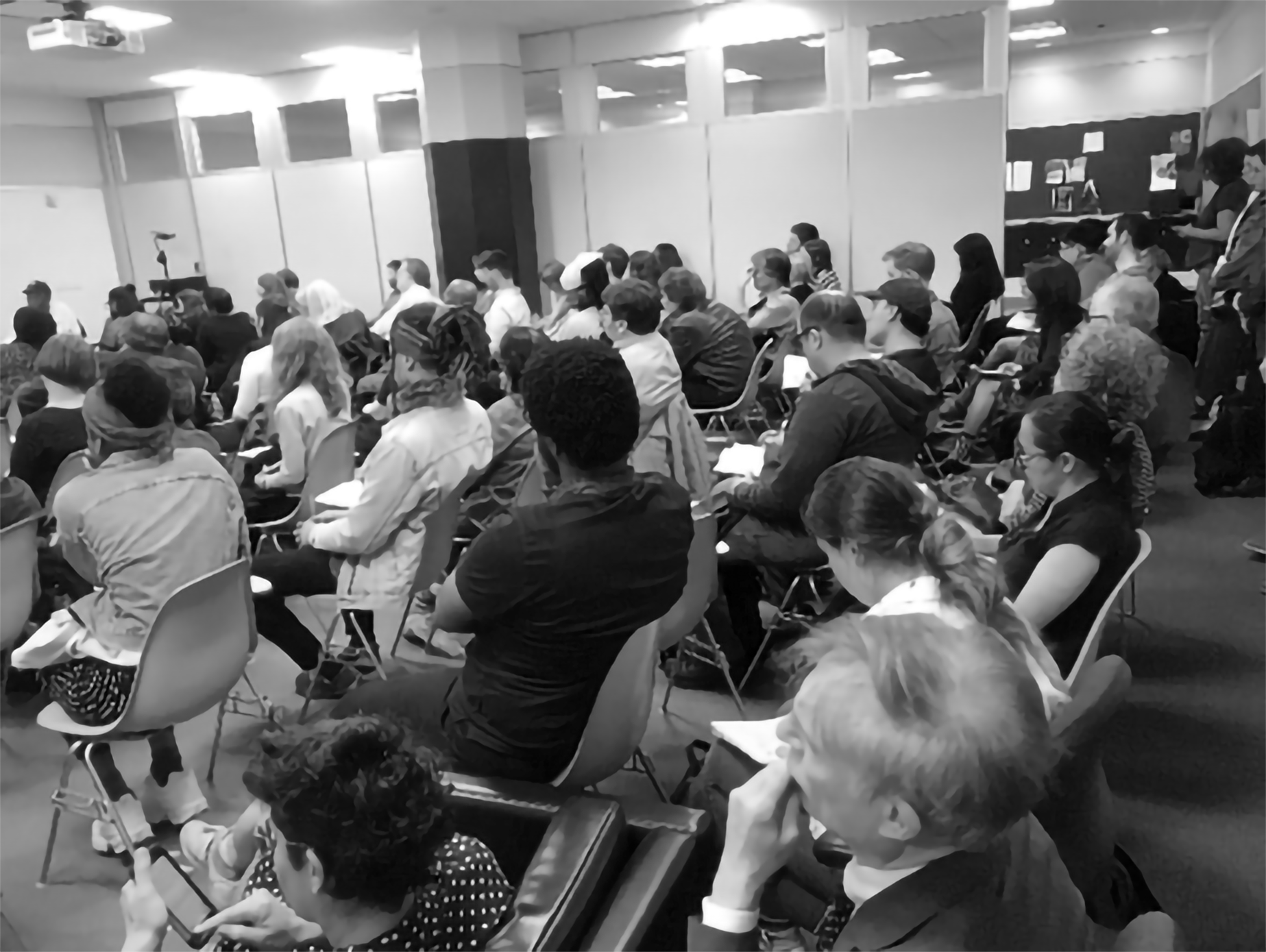 During the Q&A portion, the audience was clearly eager to speak with the panelists. The sense of urgency was evident through their questions and personal experiences on all matters related to rent and development. Panelist Monxo Lopez explained the issue of Opportunity Zones, which he described as a sanitized term to describe the ways in which investors can take advantage of poor communities. This federal program is set up to encourage investors to “revitalize” low income neighborhoods – effectively functioning as a state-sponsored private development. Lopez described this as Trumpian and recalled policies enacted during the Nixon era that followed this same logic.

Francisca Benitez concluded the talk and invited the audience to join a protest at the Supreme court, 60 Center Street, on June 5, 2019. The protestors come from the Two Bridges neighborhood in lower Manhattan and Chinatown, an area which runs from Clinton Street to Cherry Street. The group opposes a rezoning and development plan that threatens to displace many residents of that community. The event was co-organized by The Center for Place, Culture and Politics and the Earth and Environmental Sciences Department at the Graduate Center.

Stein, Samuel. Gentrification Is a Feature, Not a Bug, of Capitalist Urban Planning. Available at: https://www.jacobinmag.com/2019/03/gentrification-is-a-feature-not-a-bug-of-capitalist-urban-planning