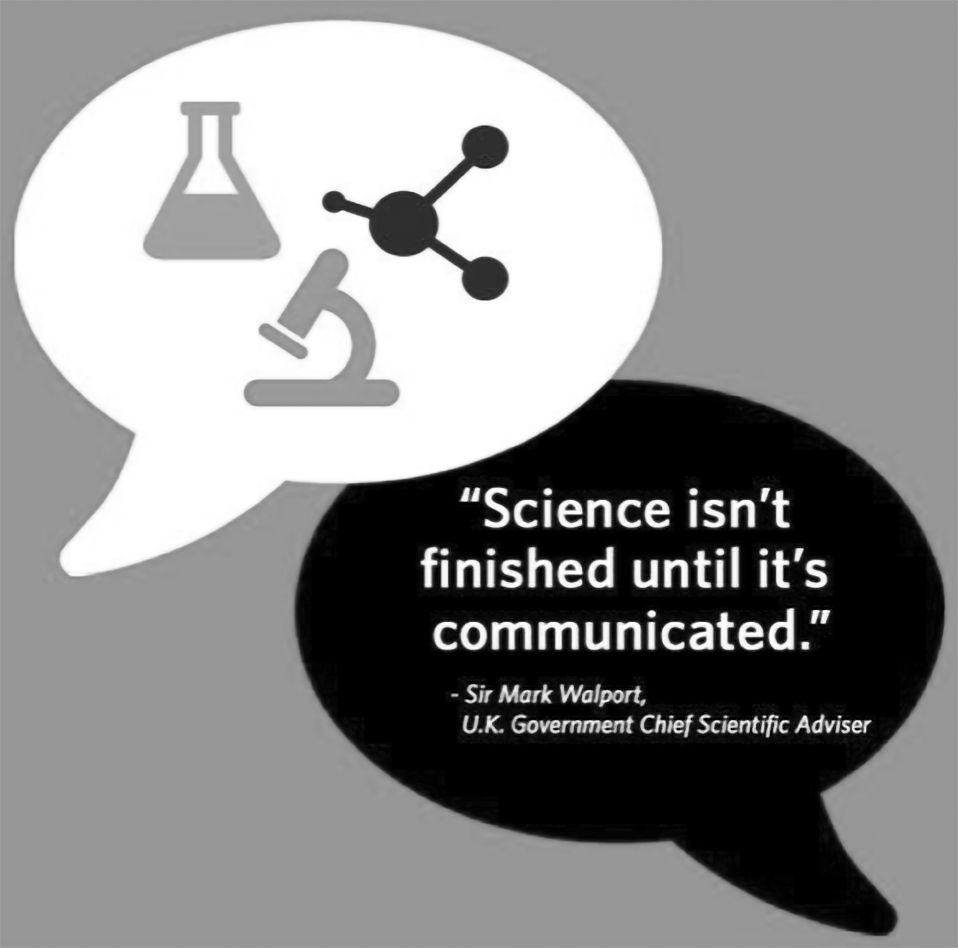 Getting your PhD in science teaches you a variety of things. Students often find themselves juggling responsibilities of teaching, conducting experiments, writing manuscripts and grants, mentoring undergrads, and spearheading critical, inquiry-based investigation. However, science PhD programs underemphasize the art of “communicating one’s science.” For all those hours spent toiling in the lab, making innovative discoveries, trouble-shooting, reaching painstaking conclusions about a hypothesis and determining the next steps of inquiry – how do you explain these findings to your boss? To the scientific community? To the rest of the world? This is a dilemma common to many science PhD students.v

At its fundamental core, science is a discipline meant to be shared, so it makes sense that momentum be focused to move in this direction. Sir Mark Wolpert (who served as the UK’s Government Chief Scientific Adviser from 2013-17) is quoted as saying: “Science isn’t finished until it is communicated.” For what good is knowledge gained by the scientific community if it is only understood by a select few, rather than by the whole world, for whom such knowledge is meant to benefit. Rockefeller University, an institution renowned for its association with many Nobel Prize Winners, has an important motto: “Science for the Benefit of Humanity.” But how can science benefit humanity unless we, as scientists, are able to communicate our work to different audiences and afford them better decision-making? Let me explain.

Earlier last year, you may recall the ominous climate-change report issued by the United Nations: if we don’t manage to lower carbon emissions collectively to prevent the Earth’s temperatures from rising by 1.5 – 2°C, there will be catastrophic consequences. A morbid picture was painted to illustrate the potential impact. The Bahamas is a popular vacation destination for many people. But small islands like the Bahamas are in danger of being inundated with water and disappearing from the Earth if the world’s nations don’t make drastic changes to reduce the level of carbon emissions. Dire action must happen internationally to reduce energy consumption and transition to better renewable energy sources like solar and wind power (instead of relying on burning fossil fuels which remains the world’s largest source of carbon emission).  And while such actions may call for some sacrifices, it’s important to stress we may not HAVE a future to look forward to if people aren’t made aware of these predictions. In addition, rising carbon emissions has the ability to lead to wilder weather patterns, disrupt ecosystems, and result in the extinction of several predicted animal species. How can we stop such situations from happening? 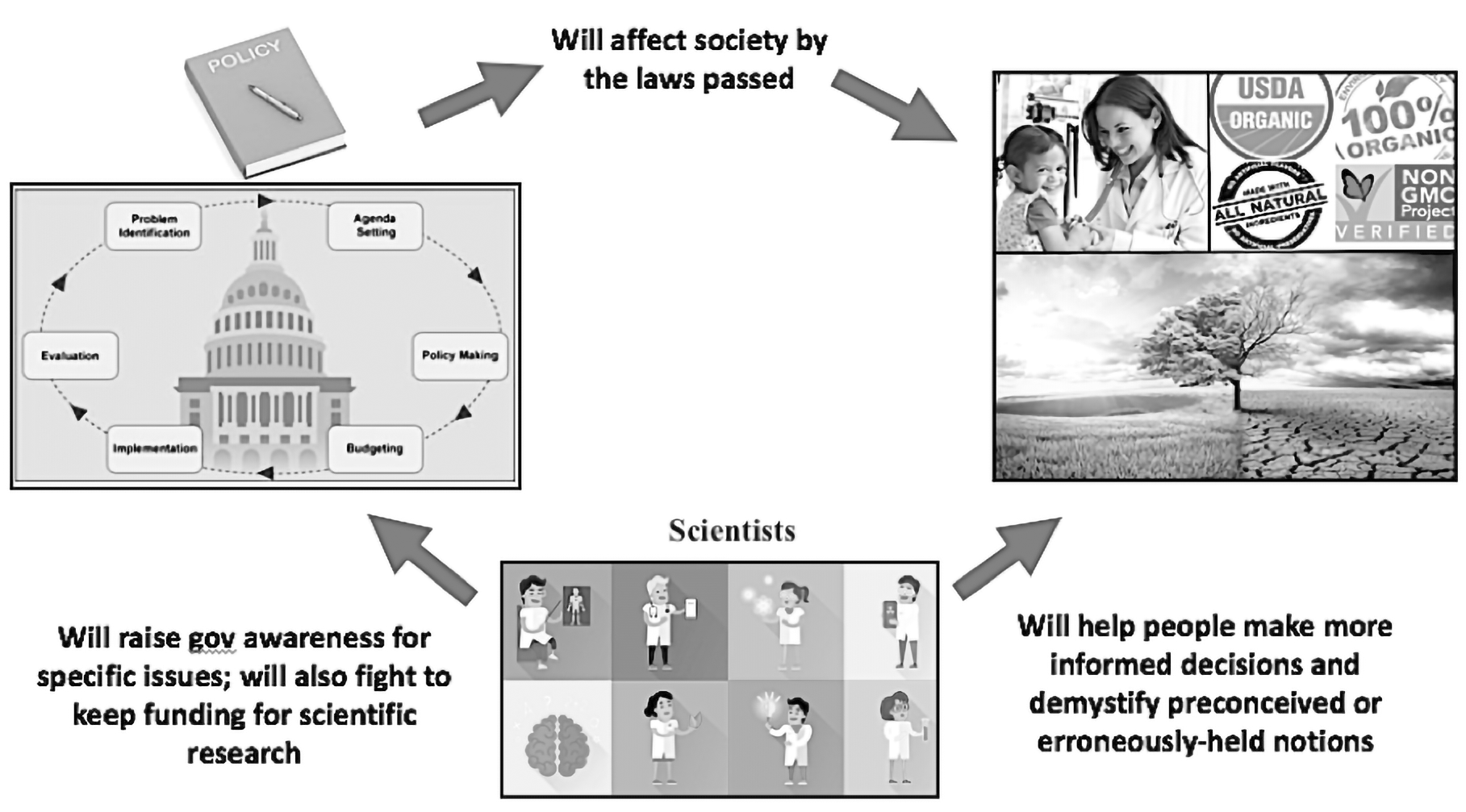 This is where scientists enter the picture. I believe that science PhD students should be encouraged to take pride in their research and effectively communicate their science further to explain the far-reaching consequences of discovery and understanding. In an age when society may be in denial or simply unaware of the dangers of climate change, and where the U.S. President withdraws from the Paris Climate Agreement, it means that we need more young scientists to explain, in plain language, what is happening across the spectrum of scientific disciplines. The figure below illustrates the value of training the next cadre of scientists to demystify and explain their research to the public.

I use the example of global warming and impending danger because it has been a popular topic in the news lately. But the same argument can be made for all scientists in ALL areas of research- from cancer biology to environmental sciences, to chemistry, physics, and nutrition. The more often young scientists are trained to communicate their work effectively, the more often people will be empowered to make informed decisions about their health, the products they consume, or their role in energy consumption. There are also erroneous rumors, such as “genetically modified organisms (GMOs) can cause cancer” or “vaccination leads to autism,” that have been debunked after further inquiry. But who better to relay these findings than the people who are currently studying or researching these issues? Scientists who are trained to be better communicators can therefore alert the government to the significance of specific issues, such as climate change. This would encourage the government to take appropriate actions by passing laws to cut down on carbon emissions via taxes, regulation, or take alternative actions. And these policies would, in turn, have a direct effect on society, by changing behaviors and outcomes. This is the potential impact scientists can have if they can practice communicating their science. So where can young scientists receive this training?

As mentioned earlier, not many STEM PhD programs incorporate science communication as a part of their curricula. It is often a skill that students are expected to self-teach and learn on their own. Recently however, there has been a growing awareness of the value of training graduate students to become more effective communicators, activists, and leaders in their fields. Such training has gained momentum from programs looking to attract students from different institutions. A few I have participated in and recommend highly are The New York Academy of Science’s “Science Alliance Leadership Program (SALT)” and “ComSciCon,” a communication workshop for graduate students. For those who are interested in communicating science to Spanish audiences, a program I strongly recommend is “Yale Ciencia Academy for Career Development.” These programs not only give their attendees tips on communicating their research better, but also instill the firm belief that they can act as advocates and leaders in their fields. As scientists, we must find opportunities to express the significance of our work and why our research merits more funding and public support. 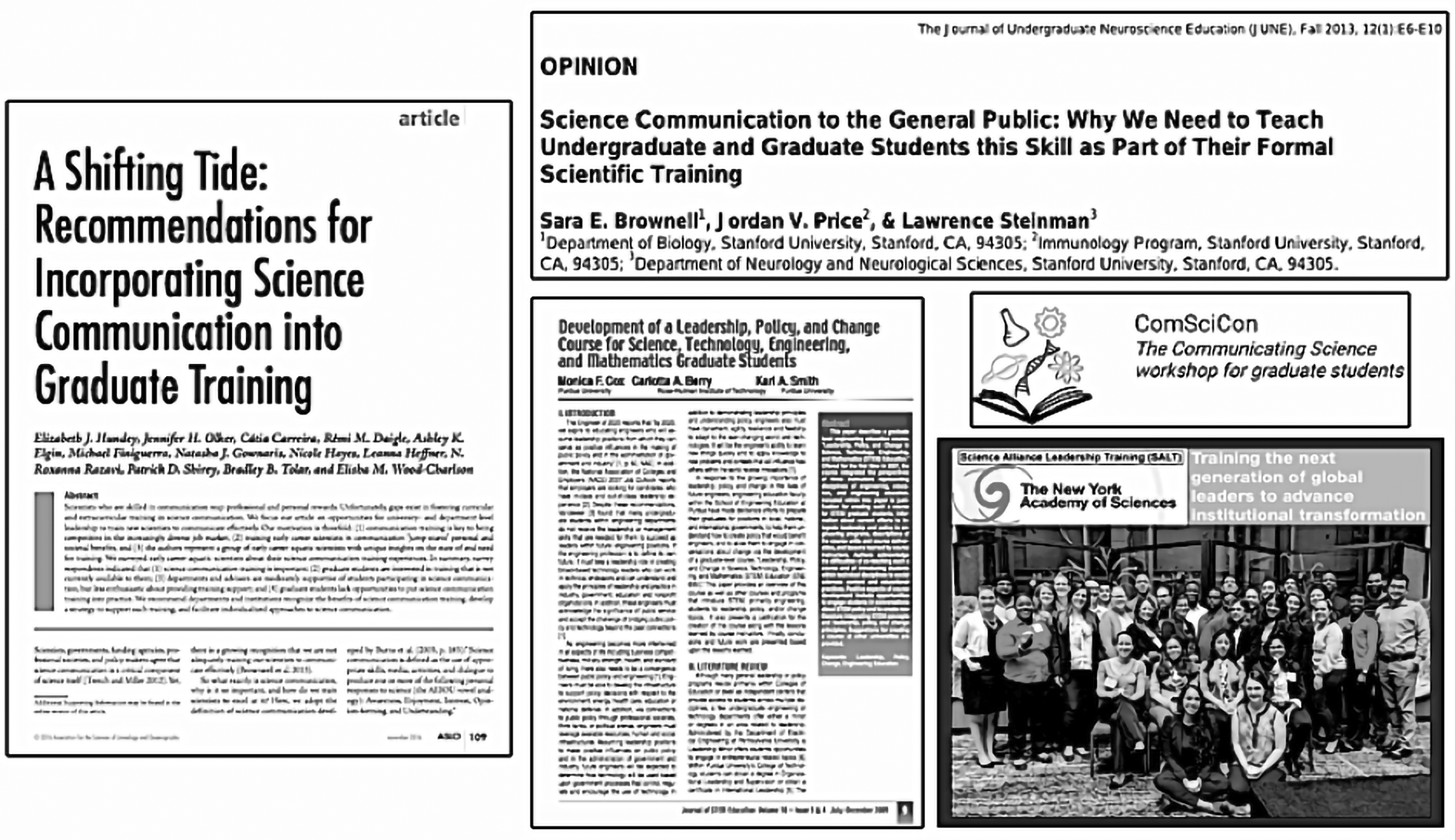 Efforts for cultivating science communication and leadership training seem to be gaining traction. More programs are now dedicated to empowering STEM PhD students to communicate, write, and build leadership skills. The programs mentioned above are not the only ones available to PhD students. Other recommendations include the American Association for the Advancement of Science (AAAS) Mass Media Fellowships, AAAS Science & Technology Policy Fellowships, and Alda Science Communication Workshops among several others. I hope that my fellow PhD scientists consider applying to these programs. The benefits are two-fold: not only will you be an active promoter of change and raise awareness around your research, but you will also be better prepared to deliver effective and memorable presentations – a useful skill when you’re in the job market!

It is my firm belief that scientists must become more active leaders and better communicators in their fields.  The “March for Science” rallies are a testament to the growing desire of scientists to become more visible and accessible in the world. Will you make your voice heard? Will you try to educate the public? Will you fight for your research? I leave you with the following message: As one, we can only do so much. As many, watch us change the world.